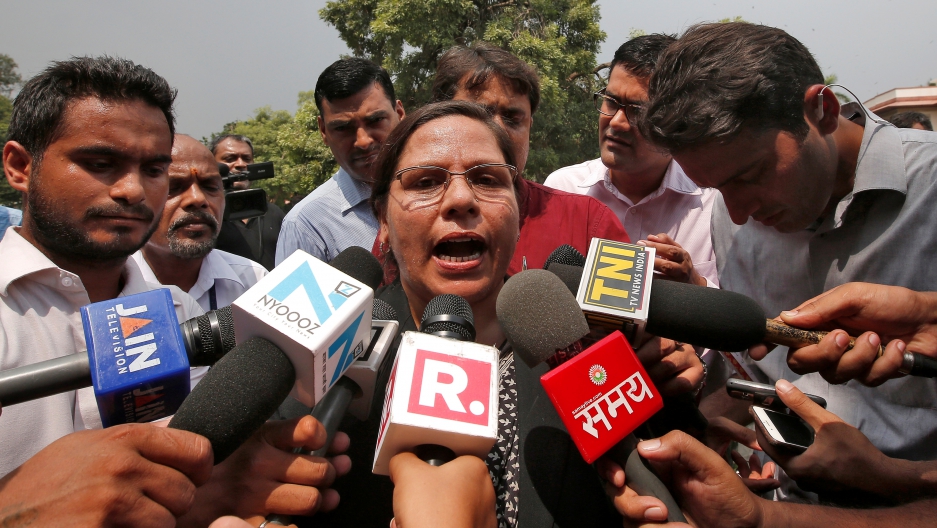 Farha Faiz, a lawyer, speaks with the media after a verdict for the controversial Muslim quick divorce law outside the Supreme Court in New Delhi, India, August 22, 2017.

According to a Muslim custom that is rooted in tradition but not Islamic law, men have to say just three words to their wives if they want to dissolve their marriages.

But in India, a group of women petitioned the Indian Supreme Court to end the practice. This week, the court ruled 3-2 that the three-word divorce was unconstitutional and illegal.

Shayara Bano, 35, was divorced via this method on April 11, 2015. She was ill, and her husband of 13 years dropped her at the railway station so she could convalesce at her parents’ home. When she got there she received “a typed letter and all it said was ‘Main tumhe talaq deta hoon’ (I divorce you) three times. Two witnesses had signed it. And with it was a check for 15,000 rupees” — the dowry her father had paid at the time of the marriage.

Shayara, who has a master’s degree in sociology, was shocked and angry. The clerics she consulted said her husband was within his rights to divorce her, in absentia, and remarry. Her husband took custody of their children as well, though a legal case is pending.

“When something bad happens, you automatically find the strength to fight,” she said. She went to a lawyer and filed a petition challenging the practice, known talaq-e-biddat. Eighteen months later, a five-member panel of the Supreme Court ruled the practice unconstitutional.

“We drafted our writ petition on gender justice, gender equality and gender equity,” says Abhishek Bharti, an attorney on Shayara’s legal team. “We didn’t go into what the Quran says and how any religious authorities have interpreted it. By the very fact that the practice of talaq-e-biddat is arbitrary and not reciprocal, we say it is not protected under the constitutional right to equality for every citizen.”

“When I filed, I didn’t think it will become such a big issue,” Shayara said. But then four more women and an NGO joined the case. One of the co-petitioners had been divorced via an overseas phone call, another was handed a piece of paper. As the case became more visible, other women recounted their own arbitrary divorces, some delivered via text message or video chat.

Proponents of triple talaq divorce, such as the All India Muslim Personal Law Board, say it allows for autonomy and quick respite from a marriage that isn’t working, or in cases of abuse. Challengers, like the NGO involved in the case, the Indian Muslim Women’s Movement, say it leaves women destitute and contradicts the Quran, which states men and women are equal. They also point out that if a woman initiates the instant talaq, she forfeits the right to maintenance, alimony and property.

Regular divorce under Islamic law follows a different trajectory, says Amena Azeez, a blogger who also runs the Twitter account @MuslimVoices. Divorce is systematic, she says, with many provisions for women. “Regular divorce takes three months, involves family mediation, and happens under the guidance and consultation of the priest. It closely mirrors the legal processes upheld by the law of the land,” Azeez said.

The dispute exists because, historically, the courts have shied away from interfering in the matters of religious minorities. Since 1937, Muslim personal law has governed issues of succession, inheritance and marriage for citizens who identify as Muslim.

But, the petitioners pointed out that the constitution supersedes personal law and guarantees the right to equality to all citizens. Additionally, they noted that the practice of instant divorce is prohibited in 21 countries, including Iran and Pakistan. An independent survey conducted by the Indian Muslim Women’s Movement in seven Indian states found that 92 percent of Muslim women wanted an end to the instant divorces.

The Supreme Court has directed parliament to enact a legal prohibition of the instant divorce within the next six months. Advisories will be distributed to clerics, NGOs and the police to make them aware of the new prohibition. But, effective immediately, no man can initiate triple divorce.

Bharti says he feels the decision vindicates all women. “The way this instant triple talaq has been misused, you’d be amazed that these things still happen in India. These women are treated so badly, the threat of divorce is a noose always hanging around their neck.”

On the phone, Shayara sounds measured, but happy. “Muslim women who were suffering with this pain for so many years will get freedom and respite,” she said. As for herself? She’s enrolled in an MBA program. “My husband remarried so there is no question of returning to him,” she says. “I would like to be independent and make sure I am financially strong. I’m glad my daughter will never face something like this.”