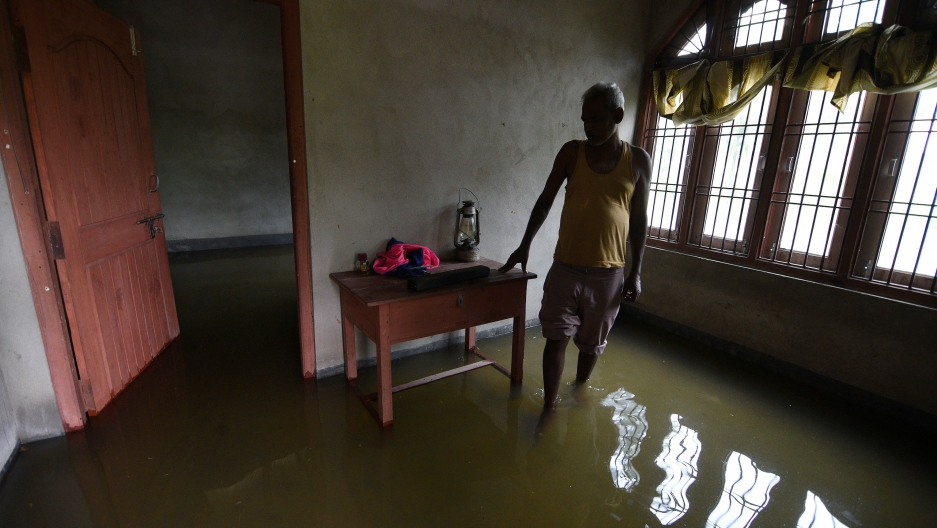 A man stands inside his partially submerged house following floods at a village in Nagaon district, in the northeastern state of Assam, India, August 16, 2017.

Nearly 600 people have died and millions have been affected by monsoon floods in South Asia, officials said Saturday, as relief and rescue operations continued.

The latest floods and landslides in the subcontinent began in the second week of August, as the annual monsoon strengthened its grip over the northern and eastern parts of the region.

As many as 33 out of 75 districts in the most populated Indian state are reeling from floods that have left 55 people dead.

"We have sought army's help to reach out to the affected people," T P Gupta, a senior official from the state's disaster management authority, told AFP.

Nearly 100,000 people have moved to shelters, with authorities estimating another two million have been hit by the deluge.

In India's worst hit Bihar state the death toll reached 153 following one of the deadliest floods to hit the region since 2008.

Nearly 400,000 people have sought shelter in relief camps and an estimated 10 million have been affected by the flood.

"Nearly 1,300 shelters have been opened to accommodate the affected people," Kumar told AFP.

Both Bihar and Uttar Pradesh border Nepal, which was hit by floods this weekend and where the death toll is 123. At least 20 percent of the 28 million residents are affected in what the United Nations has called the worst flood to hit the country in 15 years.

Further east in India, at least 60 people have died in floods that hit Assam state a second time in less than four months and nearly 425,000 remain in relief camps.

Railway connectivity between the remote region and mainland remained suspended for the sixth consecutive day following large scale damage to the tracks.

Authorities in West Bengal state said the flood waters were receding after a lull in the rains but 52 so far deaths were reported . More than a million people have been affected.

At least a hundred people have died in neighboring Bangladesh, with close to six million affected by the floods.

The government has opened nearly a thousand shelters in schools and colleges where nearly 300,000 people have taken shelter, the country's disaster management department said.

But there are still pockets of the country where help has yet to reach.

Poresh Mondol, a farmer in the northern district of Kurigram, one of the worst hit areas, has been camping with his family on the roof of his tin-shed house, most of which was submerged.

"No one has come to us with any help. We are left with the last fist-full of dry goods," he told AFP by phone.

The International Red Cross called it a humanitarian crisis and said urgent action was needed.

Every year hundreds die in landslides and floods during the monsoon season that hits India's southern tip in early June and sweeps across the South Asia region for four months.

Eight others, including two soldiers, were killed in Uttarakhand state in landslides on Monday.