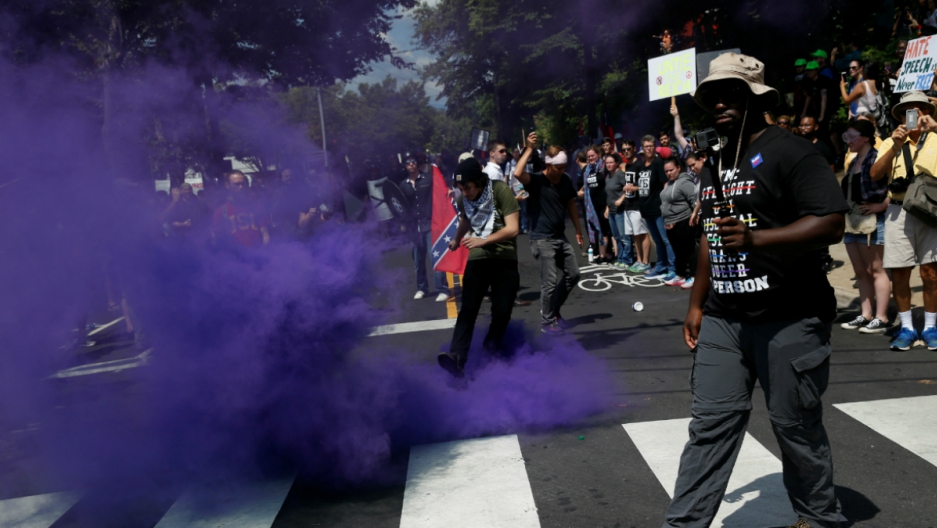 A smoke bomb is thrown at a group of counter-protesters during a clash against members of white nationalist protesters in Charlottesville, Virginia, U.S., August 12, 2017.

Peter didn’t want to use his real name because he’s afraid of becoming a target for white nationalists.

He was one of the counter-protesters in Charlottesville on Saturday — the ones President Donald Trump on Tuesday referred to as “very violent” and “charging with clubs in their hands, swinging clubs.”

I first reached out to Peter in July, over Skype, when I was doing research on a movement called antifa, short for anti-fascist.

Peter says for him, “antifa is a movement dedicated to resisting all forms of oppression,” but different participants can believe different things.

Lots of people I talked to even pronounced the name differently.

The one thing they all had in common, though, was a belief that it was important to keep racists and fascists from expressing their views in public. That can mean publically shaming them. Or even physically confronting them.

In February in Berkeley, antifa activists in masks broke store windows, and threw rocks and molotov cocktails at police during a protest against a planned speech by white nationalist provocateur Milo Yiannopoulos.

Peter says he got involved in antifa in college. He goes to a university in Virginia, and is about to start his junior year.

Antifa is a movement with a long history — dating back to Europe of the 1920s and '30s, when leftist groups formed militias to fight fascist para-military units out on the streets.

It had a rebirth on the punk scene in Germany and England in the 1980s and 1990s, when neo-Nazis started recruiting at concerts. Antifa groups fought back.

“I really would not have considered any of this kind of organizing to even be necessary before Donald Trump was elected,” says Peter.

I met Peter at the rally in Charlottesville, after the police had shut it down and people were starting to disperse.

“The whole thing has been scary,” he said, “Anyone who is telling you otherwise is lying through their teeth.”

He said people on both sides had been throwing water bottles. His hands were stained from overturning a tear gas canister.

We only talked for a few minutes.

He had heard white supremacists were gathering in a different park so he was going there next.

“There are still a lot of people that we don’t want to be here,” he explained, “Hopefully the events of the rest of the day will convince them that they don’t want to come back.’’

A couple hours later Peter texted that he was in the hospital. He had been one of those hit by the car that drove into a group of counter-protesters, killing one woman and injuring 19.

His injuries were minor, just cuts and bruises, and he was home by the end of the day. He was lucky.

The videos and photos were nightmarish. They showed people flying through the air, shoes scattering the sidewalk. Heather Heyer was killed.

The politics of it all

I called Peter after President Trump made his remarks about Charlottesville on Tuesday.  He hadn’t seen the news, so I summarized it for him, wondering how he would react.

Peter sounded different from the first time we talked. A little angrier, but also a little gentler at the same time.

I asked him about the car attack. But he said that he’s had to describe it too many times already. It’s hard for him to even drive past the memorial.

“For better or for worse,” he said, “this is going to be one of the most significant moments in my life.”

I asked him about how he thinks it’s changed him.

“I hope to come out of this with lessons on how to be stronger, how to be better, how to keep people safer during these kinds of things,” he answered slowly, “and hopefully turn this horrific experience into something I can take away some positives from.”

How do we keep people safer?

I’m not sure I agree with Peter’s answer that sometimes that might require violence.

But I think he has the right question.

Editor's note: The audio version of this story that aired earlier this week on PRI's The World implied that Peter didn’t seem threatening because of the way he looks, but what makes someone appear intimidating is subjective. An adjusted audio version and revised text accompanies this piece.