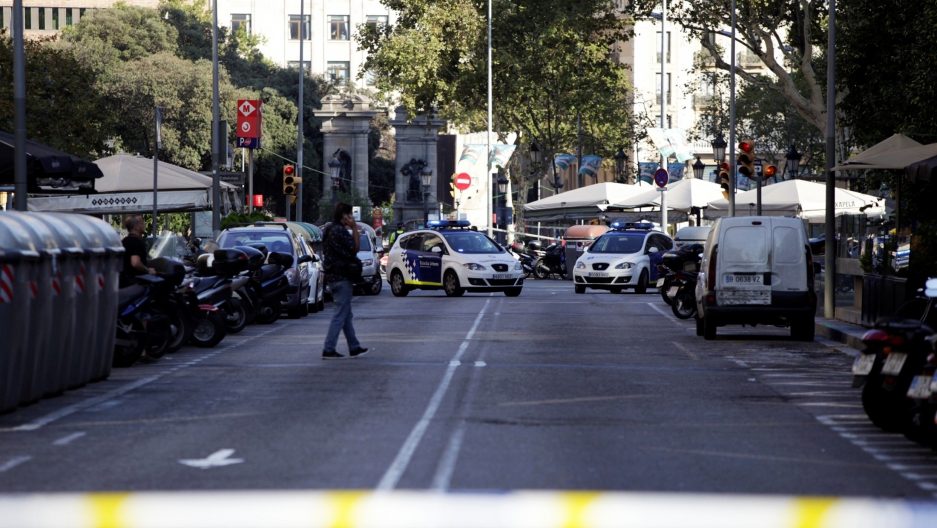 A street is cordoned off after a van crashed into pedestrians near the Las Ramblas avenue in central Barcelona, Spain August 17, 2017.

A driver deliberately plowed a van into pedestrians on one of Spain's busiest streets on Thursday, leaving 13 dead and at least 80 injured in what police said was a "terrorist attack."

"Huge collision on Las Ramblas in Barcelona by an individual driving a van, many injuries," a statement from Catalan police said.

The area around the incident was cordoned off, with several ambulances and police vehicles on the scene, an AFP correspondent said.

Police in Barcelona, Spain's second-largest city, told crowds fleeing the scene by megaphone that they were dealing with a "terrorist attack."

The famous Las Ramblas boulevard is one of Barcelona's busiest streets, normally thronged with tourists and street performers until well into the night. 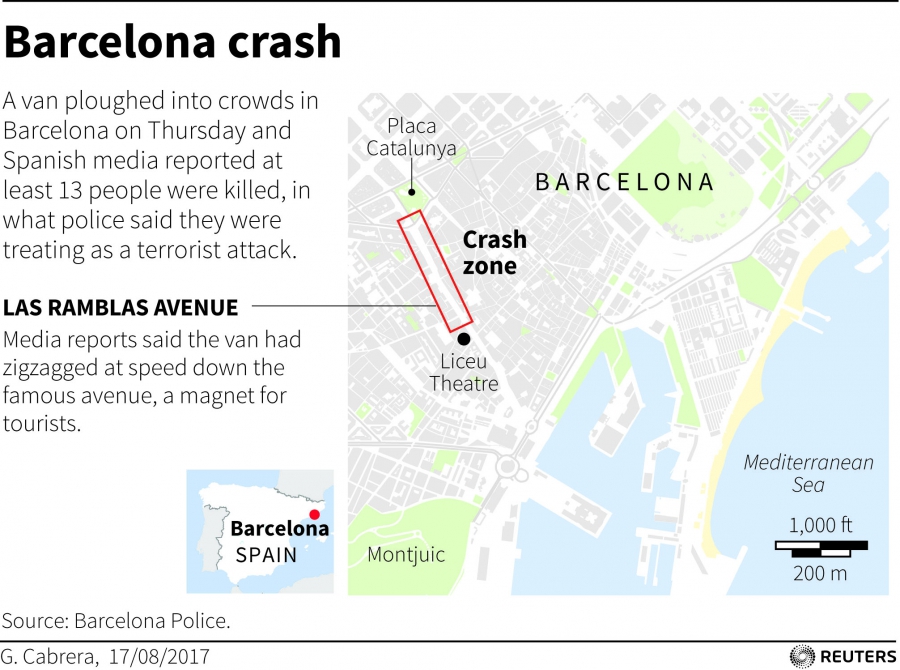 A van crashed into dozens of people in the center of Barcelona on Thursday.

A first suspect held earlier was identified as Driss Oukabir, according to a spokesman for Spain's main SUP police union, who had no further details.

The so-called Islamic State has claimed responsibility for the Barcelona attack, saying it was carried out by "Islamic State soldiers."

The claim has been made by the ISIS propaganda, Amaq. The group gave no evidence or further details to back this claim. 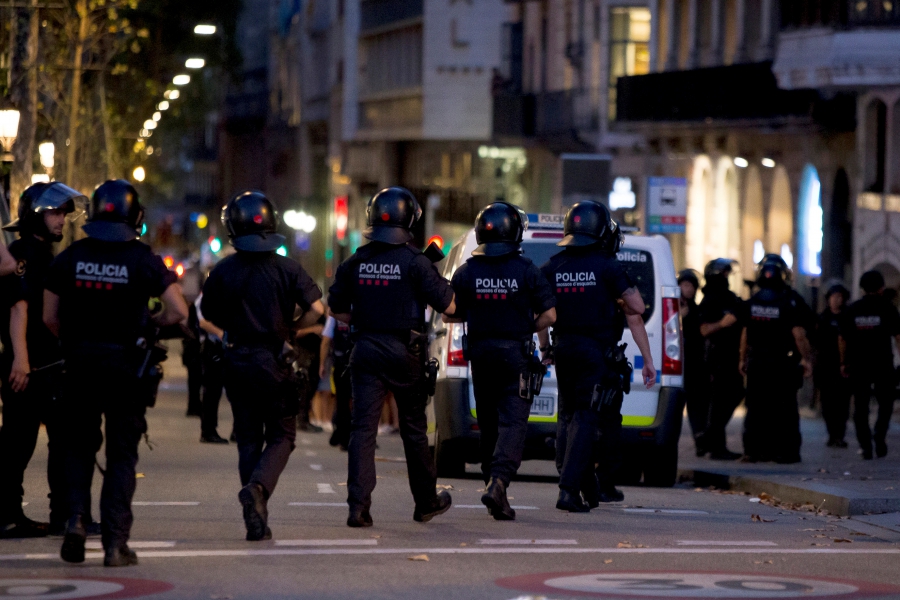 Police patrol the area after a van crashed into pedestrians near the Las Ramblas avenue in central Barcelona, Spain August 17, 2017.

Spain has so far been spared the kind of extremist violence that has occurred in nearby France, Belgium and Germany.

But it was hit by what is still Europe's deadliest jihadi attack in March 2004, when bombs exploded on commuter trains in Madrid, killing 191 people in an attack claimed by Al Qaeda-inspired extremists.

Vehicles have been used in several terror attacks in Europe in recent years, including a jihadi massacre that claimed 86 lives in the French Riviera city of Nice.

That onslaught in July last year and other similar attacks were claimed by the Islamic State jihadi group.

One person was struck by bullets while the other was hurt as they tried to flee the shooter, who fled the scene. No suspected motive for the attack was given.

Spain has emerged as a potential target for jihadi, with extremist websites mentioning it for historical reasons, since much of its territory was once under Muslim rule.

But they publicize every arrest of alleged jihadi, most of them detained for propaganda, recruitment for extremist groups or "glorifying terrorism."

According to the interior ministry, more than 180 "jihadist terrorists" have been arrested since June 2015 when Spain raised the terror alert level to four out of a maximum of five, in domestic and foreign operations.

The United States on Thursday offered its assistance to Spain in the wake of a deadly van attack in Barcelona's most popular street Las Ramblas, which left at least two dead.

Secretary of State Rex Tillerson also said that consular assistance was being provided to Americans in the city, and urged US nationals to check in with their families.

"Terrorists around the world should know — the United States and our allies are resolved to find you and bring you to justice," Tillerson told a press conference with Defense Secretary Jim Mattis and their Japanese counterparts.

The United States condemns the terror attack in Barcelona, Spain, and will do whatever is necessary to help. Be tough & strong, we love you!