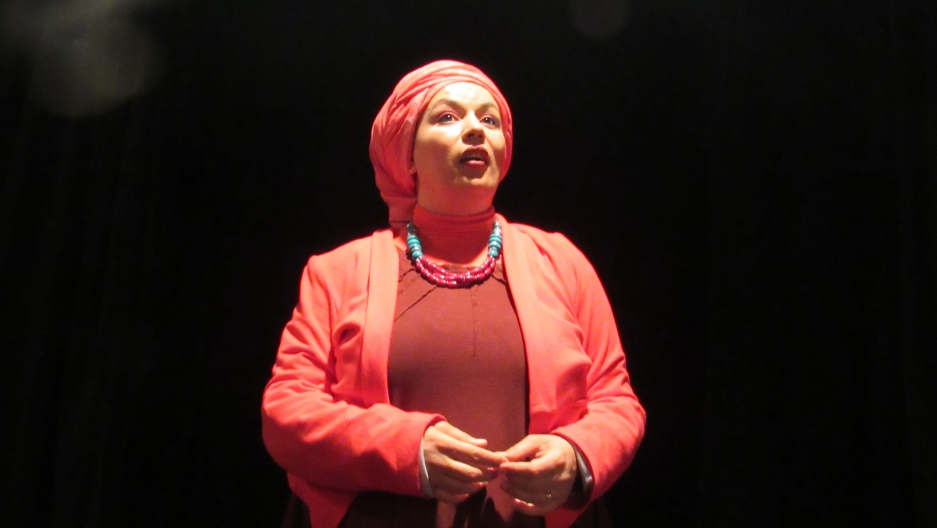 Samia Orosemane tweaks stereotypes about her North African community in her one-woman show in Paris.

It’s no small feat for a French Muslim woman from a disenfranchised suburb of Paris to make it on stage, let alone as a stand-up comedian.

At the start of her Paris one-woman show “Femme de Couleurs” ("Woman of Colors"), the 37-year-old comedian of Tunisian descent walks on stage to a mashup of the themes from "Jaws" and "Star Wars." Veiled in black from head to toe, she paces ominously on the dark stage. And then in a stage whisper, she says, “I’m your mother.” The audience roars with laughter.

“Oh, that’s what scares you?” she says, pointing to the black veil. “Don’t worry, it’s a convertible.”

Then she pulls off the veil, revealing her turban-covered head.

That's Orosemane, taking on the hijab taboo. France bans all religious signs, including the Muslim headscarf, in public schools and for some government workers. Orosemane wears a colorful turban instead of hijab — something she says some people take issue with. They tell her she should be more modest and not show herself.

“I feel like telling them, ‘Mind your own beeswax.’ Some people say my turban is not as good as a real scarf because my earlobes still show, and it’s too sexy. I want to tell them the same thing a comedian told me, "On stage, you’re supposed to be naked, how are you going to do that with a scarf on your head?" But it’s part of who I am, it’s as if I told you I don’t like your haircut. I am here to make people laugh, not to get caught in religious discourse. My job is to be a comedian, and right now I think I do my job well.”

On the day I met her, Orosemane wore a salmon-pink turban and matching jacket, red lipstick and pink eyeshadow. Dressing as she pleases, she says, is her feminist stance.

In her show, Orosemane makes fun of many accents and stereotypes, from North Africans to the Paris equivalent of a Valley girl. It’s biting satire, but it never mocks people harshly. Orosemane sees her brand of comedy as equal opportunity offender, and the audience gets that.

“It’s hard to peg me,” she says. “In fact, even people from my background don’t understand what’s going on. Since I pick on everyone, no one knows who I am. I’m like a UFO. I’m a girl, born in France, of Tunisian parents, dressed like a sub-Saharan woman who lives her life and wears a turban. I make my own choices. I don’t try to fit any mold; I don’t try to please.”

Orosemane also pokes fun at her own Tunisian culture. At the heart of the show is her long-standing battle with her mother about dating a black man, a French guy from Martinique who converted to Islam. Orosemane acts out her mother’s reaction when she told her she wanted to marry him. It's a wail of despair.

Marrying someone who’s not North African is considered a no-no by some in Orosemane’s community, even when that someone is Muslim.

“My mother used to tell me, ‘I’d prefer an Arab who’s a drunk to a black man who prays,’” Orosemane says. “It’s a visceral racism that is prevalent in the North African community, as elsewhere. Everyone is afraid of the other. Tackling this on stage is a way to make people think about it.”

Orosemane’s mother eventually gave her blessing to the marriage. On stage, Orosemane brags about being an unconventional wife to her husband.

"At home, he does the cleaning, the shopping, the cooking, and I make a mess," she says. "When I get home, I toss my scarf here, my coat there and my purse over there, and he goes: 'Samia, respect my work!'"

She moves around the stage quickly and then adds softly, with a smile, “It’s so good not to be hitched to an Arab!”

Then she adds, “To all the Arab mothers in the audience who’re going to be waiting for me outside, please note, I’ll stop saying this when you start teaching your sons to clean up.”

That gets her laughter and a round of applause.

In her show, Orosemane aims to make people laugh but she also wants open minds.

“I try to be as useful as possible. If I can create bridges where there are walls, I’m very happy. I’ll try anyway. If it works, great, if not, I’ll turn to other people.”