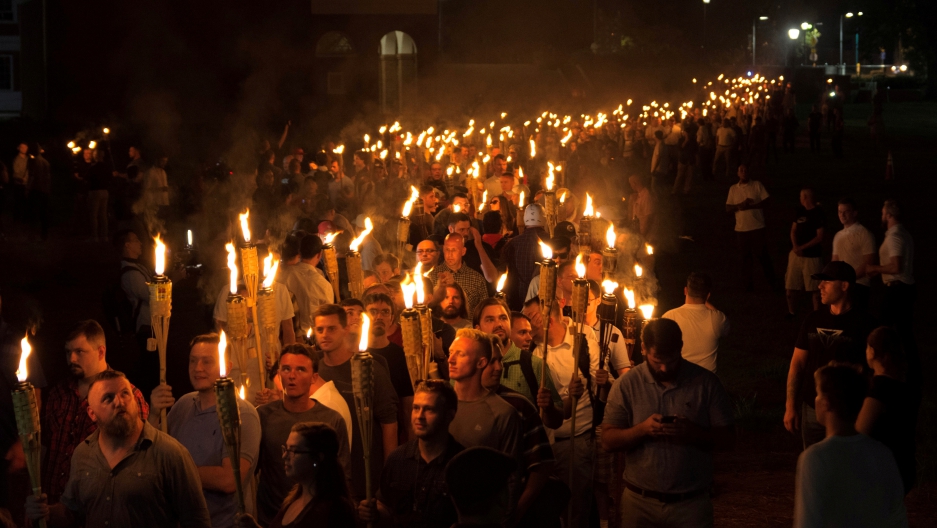 White nationalists carry torches on the grounds of the University of Virginia, on the eve of a planned Unite The Right rally in Charlottesville, Virginia, on Aug. 11, 2017.

On Saturday, a white nationalist rally erupted into deadly violence as a car plowed into a crowd. On Tuesday, President Donald Trump blamed “both sides” for the violence, in effect equating neo-Nazis and white supremacists with counter-protesters speaking out against racism.

“We have a president who was unable to find moral clarity in the days after Charlottesville, and that is both saddening and angering,” says Eric Liu, founder and CEO of Citizen University and author of "You're More Powerful Than You Think: A Citizen's Guide to Making Change Happen."

But Liu says that Trump’s failure to unequivocally denounce white supremacists and neo-Nazis also has a silver lining: “[It’s] a bit of a blessing because it reminds us that this is on us — as citizens — to make change from the bottom up."

We asked him for some concrete steps for change. Here are four of Liu's reccomendations, lightly edited for clarity.

"I think one of the most basic things that we've got to remember is what it looks like to take responsibility. When you look at Charlottesville, when you look at the larger disease in the body politic that Charlottesville is evidence of, and then you look at the reactions to it, there is widespread shirking of responsibility. And I think on the most foundational level each of us, as individuals, has to start asking, ‘What can I do and what is my piece of this? What's my piece of how we got here?’" 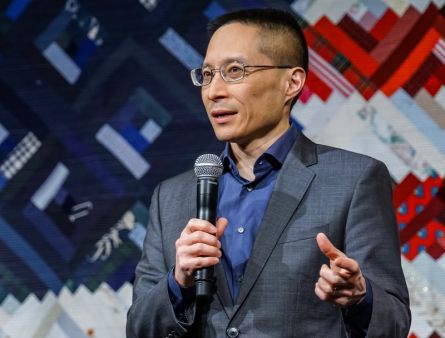 Eric Liu founded Citizen University and authors books about being part of America.

"For some people it will be [that they have] actively contributed to white supremacy or white privilege in different ways but for other people, it will probably be omission and indifference and inattention. And there's no excuse, after Charlottesville, for not paying attention."

"I think it all begins with looking inward. Each of us, particularly those who are white, have to look inward and actually take an inventory of what are the kinds of privileges, what are the ways in which [we are] exempt from some of the fears and hatred that are out there. What is [our] responsibility for stepping up, stepping in, showing up and speaking out for people who are vulnerable to this kind of racism and hate and bigotry out there? And you reflect on yourself honestly, in a way that is about taking responsibility."

"That's not where we end," says Liu, "but that's certainly where I think we've got to begin."

(Other activists, such as historian Ibram X. Kendi at American University and the activists who created the Safety Pin Box service to help white allies get educated, agree that introspection is step one.)

"My first instinct was that we should go [to planned white nationalist rallies]. But as I've reflected on it more, I actually think we should not. I think those of us who oppose hate and bigotry should collectively decide we're not going to play the game on the terms of those who are promoting hate and bigotry. And when you show up at their rallies and feed into the atmosphere of conflict and rage and fury, that often can spill into violence."

"At the end of the day, [when you show up to a rally] you're only feeding their way of creating division and conflict. I think far more effective for us as peace-loving and tolerant citizens is to organize a different rally, maybe even at the same time, but in a different part of town that shows — on our terms, in affirmative ways — what it looks like to build the beloved community, what it looks like to invite the full diversity of our actual community and country. And to do that with a spirit of joyful purpose and love and a belief that we can actually build something that people affirmatively want to be part of."

"I think creating that kind of counter-presence, rather than feeding the hate mongers with attention — because attention is their oxygen — is the way to go."

3. But still show up, just in other ways.

"There are many different ways of showing up, including organizing our money, our time, our voice to pressure policymakers, to make sure that in communities with vestiges of confederate commemoration move past that [history]. And to take more structured, intentional steps to dismantle white supremacy."

"You can also organize your coworkers and ask, ‘What can we do in our field beyond just tweeting and talking about how we oppose white supremacists? What can we actually do to make our structures and conduits of power and influence in our workplace more inclusive and less exclusively rigged to benefit the whites?’ These are actions that we can all take as citizens that go well beyond what we do on a day of a rally."

"I think it's also showing up with just our fellow citizens or family members or neighbors, people who we go to church or mosque or synagogue, people in our kids' classrooms. And this means actually deciding — in places that might seem like it's a little awkward or unexpected — to start a conversation. Two weeks ago, your kid's little league game might not have seemed to be the right place to strike up a conversation about hate and white racism and nationalism in this country. Today, it is the place. Today it is time to turn to other folks in the bleachers and say, 'Hey, you know we're all gathered here and I don't think it's OK for us just to pretend that the country hasn't gone through a pretty massive trauma. What are we going to do here in our community with our little league team, in this neighborhood, to start pushing things the other direction?'"

"Showing up takes all these different forms that are sometimes small, private actions and sometimes very visible, public actions. But it starts with that commitment in the first place to not be a bystander."

4. Put your money into the cause.

"You can organize your neighbors, your family, your friends, your fellow parishioners into donating money to organizations that are combating hate, or organizations that are helping young people around the country reckon with hard moral choices of dealing with history — whether it's a Nazi past or Jim Crow or other things."

"When you have a president who can't tell the moral difference between George Washington and Robert E. Lee, it makes you realize that it's worth facing history together as a community," says Liu.

These are just four ideas from Eric Liu. But we're sure you have more. Join the Global Nation Exchange group on Facebook to continue the discussion.