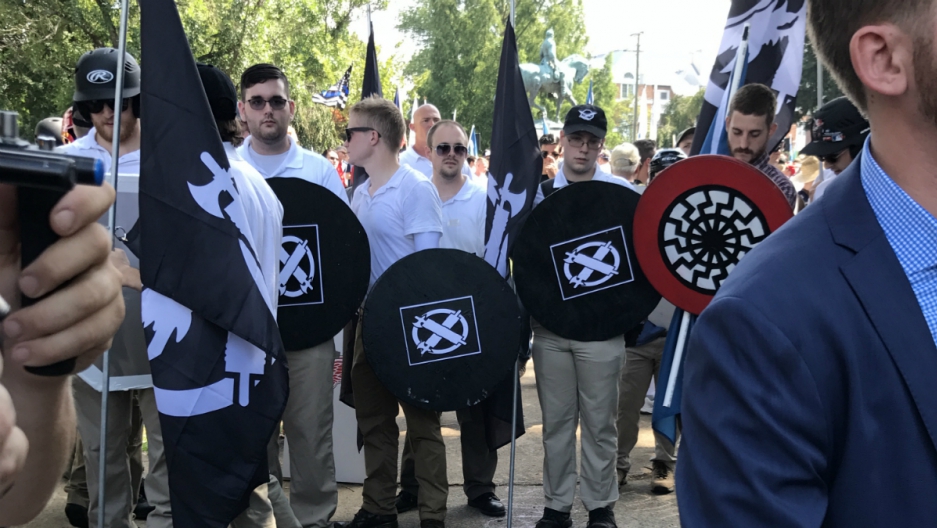 James Alex Fields Jr., who has been arrested and charged with second-degree murder, is pictured in the group (second from the left, wearing dark glasses), holding a shield with a white supremacist emblem.

I knew that things in Charlottesville were going to be intense, but I still was not prepared for what I saw when I drove into town early Saturday morning.

We parked behind a McDonald's and then walked towards the park where the main protest and counterprotest was happening. On our way, we encountered a group of people carrying a huge wooden sign that read, “There is no master race."

I tried to take a picture of them, but they waved me off. Later, I saw them on TV, using the sign as both a shield and a weapon when the fighting got intense.

Inside the park, there was a group of white nationalists holding shields with Nazi symbols. Some were wearing riot gear. Some bike helmets. Some had “Make America Great Again” caps. I took a bunch of photos, and when I looked through them the next day, I realized that one of the men in the group was James Alex Fields Jr., the man accused of later plowing his car into a group of counterprotesters, killing one and injuring at least 19.

He didn't stand out at the time.

The group was being protected by militia men standing with assault rifles. They looked like the police. But they weren’t.

Across the street were counterprotesters. They were holding huge banners saying things like “Smash White Supremacy.” The two sides were staring each other down, helicopters were flying overhead, and things were tense enough to make the air hard to breathe.

A man who looked to be in his late 20s with red hair, and wearing a neon green tank top, passed by. He told me that he had tried to buy a coffee earlier, but all the stores were closed. So, he had come out to see what was going on. I asked him about what he thought.

“Both sides have a point,” he said. “I don’t think this is about race, but about ethnicity.”

Almost as soon as he said that though, his face clouded over.

“But I don’t want anything on the record,” he added.

“When you have people of different ethnicities, different cultures living together, conflicts multiply,” he said, hesitantly. “I mean, maybe I’m wrong. If I’m wrong, I’m wrong.” He shrugged and wandered off. 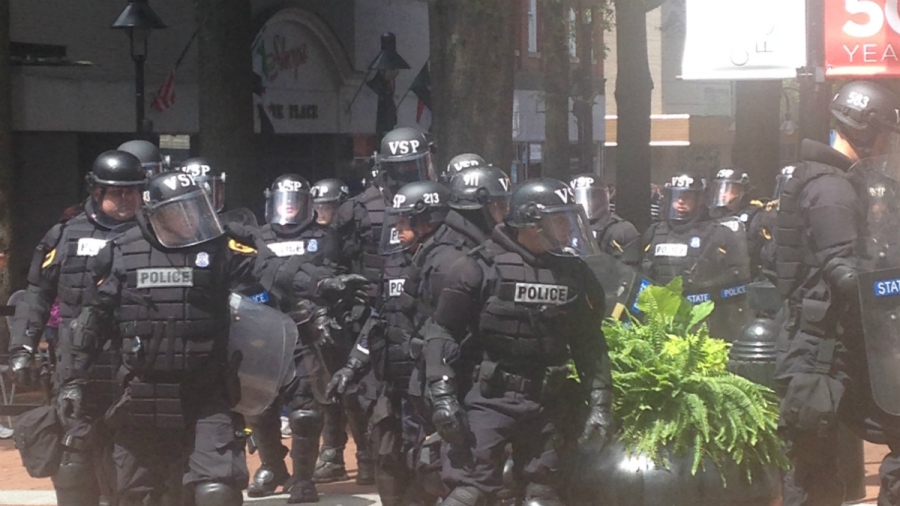 We walked a few blocks down, to where a different group of protesters and counterprotestors were facing off. I went up to the front to see if I could get an interview, but someone threw a water bottle at me. It hit my arm, and I dropped my phone. Whoever threw it was good at throwing things.

Both sides started using pepper spray and people started running, their eyes red and streaming. The police watched. One counterprotester, propped up by two others, hobbled down the block, bloodied.

“Where are the legal observers?” I heard someone yell.

Things felt bizarre — lawless and terrifying. To our left, smoke was rising. To our right, the street was blocked by police in riot gear.

“This way!” a counterprotester called out to us, and he ushered us past the police onto another street, and to safety.

Shortly after, we heard that the event had been declared unlawful and disbanded.

People milled around. We ran into a guy with a tuba.

He took a big breath and blew into his tuba.

At around noon, I met up with a 19-year-old physics student (he didn’t want me to use his name) who is a member of a movement known as antifa, short for anti-fascist. The movement is about fighting fascism and racism by any means necessary, which sometimes, to them, can mean violence. The physics student was wearing a bandana in case he got pepper sprayed, a walkie-talkie to stay in touch with others, and his hands were stained from overturning a tear gas canister.

“The whole thing has been scary,” he said.

We only talked for a few minutes before he was off to another park where he heard people were assembling.

“We want the [Nazis] to know that they are not welcome here,” he said.

Later, he texted that he was in the hospital. He had been one of those hit by the car that drove into a group of counterprotesters. His injuries were minor though, just cuts and bruises, and he’s doing OK. Since then, he’s posted on Facebook, including the following: “Nazi scum you better run. Nazi scum your time has come.” 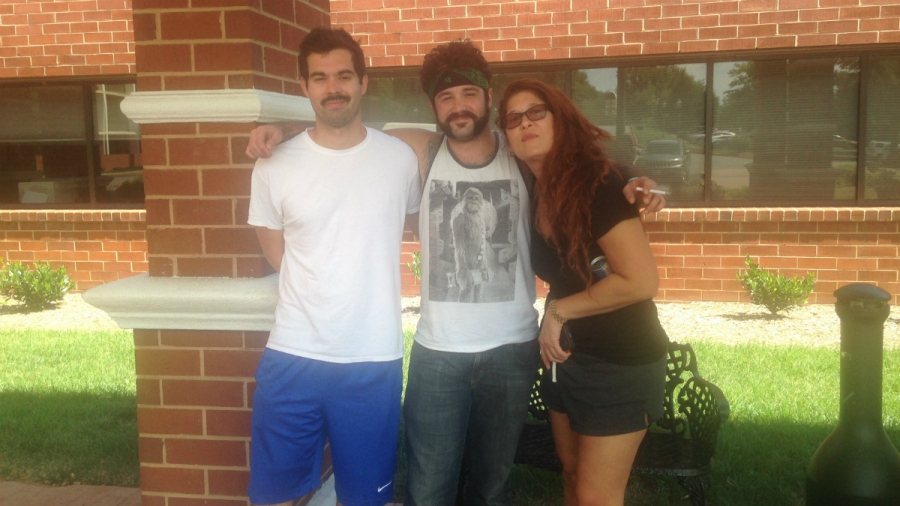 The next day, on Sunday, I saw a group of three people hanging out and smoking cigarettes in front of our hotel. I had talked to one of them, Deborah Nemeth, a middle-aged woman with long, red-dyed hair, the day before. She had told me then that she was a Trump supporter who had come out from Philadelphia to stand up for the First Amendment. I asked her if the car attack made her think about things differently at all.

“I know that people were being chased,” she said. “And I have an idea that, you know, whoever that person was [in the car], they were probably being chased.”

According to eyewitness accounts and video footage, that isn't true. I didn’t really know what to say. But I left Charlottesville feeling like although the fighting was over, it was also just beginning.