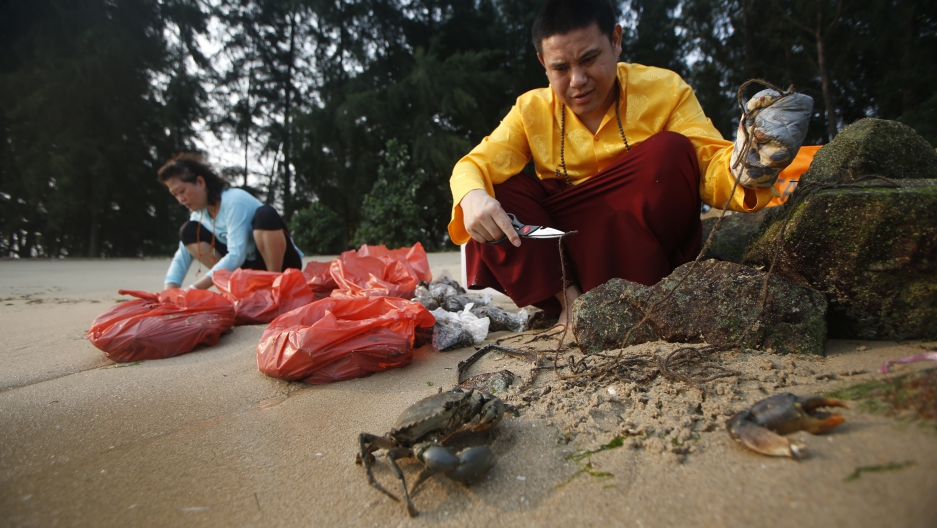 Tibetan Buddhists believe that during lunar and solar eclipses, the effects of one's good or bad deeds are multiplied severalfold. Here, a Tibetan Buddhist monk releases crabs into the sea ahead of a total lunar eclipse in Singapore on Oct. 8, 2014. On Aug. 21, a total solar eclipse will take place in the continental United States, with the path of totality passing over 14 states in all.

Throughout much of history, witnessing a total solar eclipse would mean one thing above all else. And that is fear.

For the ancient Greeks, an eclipse was a sign that the gods were angry. The Vikings saw eclipses as a potential apocalypse. And the ancient Chinese apparently believed that an eclipse meant that a giant dragon was trying to devour the sun and that people needed to make as much noise as possible to scare the dragon away.

In his new book “American Eclipse,” David Baron writes about one in 1878. He says some American scientists fully understood what was coming. But many people in the path of totality were just plain terrified when the sun disappeared one July afternoon that year.

“They were absolutely convinced that this was Jesus returning, and this was Judgment Day,” says Baron, who is also a former science editor here at PRI’s The World.

“As you can imagine, they fell to their knee, they ran to church and in one tragic instance, a father decided he wanted to get to the other side as fast as possible to avoid Armageddon and he ran home with an ax. He killed his young son. And then he took a razor, sliced his own throat and killed himself.”

“That was 1878, at a time when total eclipses were predictable and viewed for the most part through a scientific lens. But for those who didn’t know it was coming, they saw it as a truly religious experience.”

And biblically speaking, they were right to be afraid. The Gospels describe a darkening sky on the day Jesus was crucified. For a cinematic version of the story, check out the 1961 film, “Barabbas.” It was shot in Italy during an actual solar eclipse.

Astronomers dismiss the possibility that the crucifixion in early first-century Jerusalem was accompanied by an eclipse. But even now, some Christians fear that the upcoming solar eclipse on Aug. 21 could be a sign that the end of days is coming soon.

Related: What will we learn from this year's solar eclipse?

“I like to tell people who call and are anxious about these things, ‘Just pray and be joyful in God,’” says Sister Mary Elizabeth, one of the five cloistered nuns at the Passionist Nuns’ Monastery of the Immaculate Conception in Ellisville, Missouri.

She says the monastery has been getting some calls from Catholics worried about the eclipse. But Sister Mary Elizabeth says she tells them that she and the other nuns are quite confident this event is not a bad omen, nor is it a sign that the second coming of Christ is upon us.

“People like to call cloistered nuns because I think that people understand that we have a little bit of a better connection, if you want to say it that way, to what’s going,” she says.

Sister Mary Elizabeth adds that her mother superior is giving the nuns a free day on Monday to watch the eclipse from outside of the monastery, which is very close to the path of totality.

“At the noon hour, when the eclipse begins, we’re going to get our lawn chairs,” she says. “We’re going to watch it. We plan on enjoying the whole awesome show from on high, from our Lord.”

In the Islamic tradition, there is a story about an eclipse taking place on the same day that Ibrahim, the son of the Prophet Muhammad, passed away. Muhammad didn’t want people at that time to think that the eclipse was something to be worshipped, nor was it a sign of divine recognition of his son’s death. Muhammad explained that this sort of celestial event was only a sign of God, not the life or death of a human being.

But even for those who do not consider themselves to be religious at all, witnessing a total eclipse can be something deep and profound. Author David Baron says it is truly an awe-inspiring experience.

“Today, there’s so much in our lives that we can explain by science, and it’s very easy to just understand it in an intellectual way. Now, you would think a total eclipse would be the same,” Baron says. “But it is such an alien experience.”

“It is so hard to really grasp what’s going on and particularly this view of the heavens that looks like nothing you’ve ever seen before, the brain just can’t accommodate it. And so, I do think it taps into the very same part of the brain that explains religion.”

Baron says watching a total solar eclipse is sort of like standing on the rim of the Grand Canyon, multiplied by a factor of 1 million. He says it is about feeling just how small any one person is, and even one entire civilization, compared to the whole universe.

Related: A solar eclipse rallied Americans around science. Could it again?