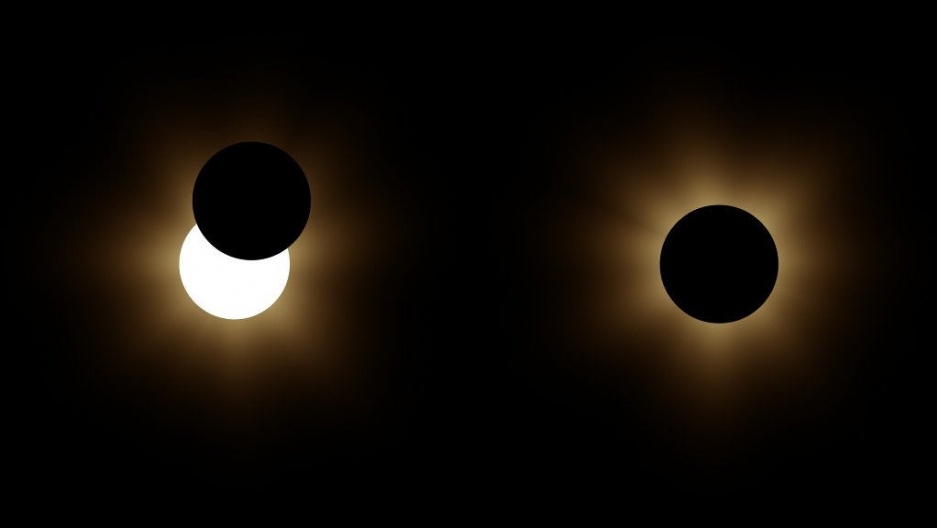 This is a composite image of a partial (left) and total (right) solar eclipse taken in March 2015.

Mark your calendar: Aug. 21 is the Great American Eclipse.

That’s when people in a 70-mile path from Oregon to South Carolina will have the eerie midday experience of seeing the sun blotted out by the moon. Even if you’re outside the main path, you can still get the treat of a partial eclipse. (Find out the exact eclipse time for your area here, and we have separate audio stories above and below for those in the path of the total or partial eclipse, respectively.) Also, we want your eclipse plans, stories and photos.

“Totality begins at about 10:15 [a.m.] local time at a place called Lincoln Beach, Oregon, and that path travels across 14 states,” says Alex Young, associate director for science in the Heliophysics Science Division at NASA’s Goddard Space Flight Center. “The shadow itself is traveling at about roughly 1,500 miles an hour, and it ends in Charleston, South Carolina, around 2:45 or so p.m. local time. So, it’s about an hour and a half across the country.”

“So, when the moon is orbiting around the Earth, it actually has an incline compared to that sun-Earth plane [of] about 5 degrees,” he explains. “That doesn't sound like a lot, but when you look in the sky, the apparent size of the moon is about a half a degree. So that means that … most of the time, the moon is above or below the sun in the sky, and so it doesn't cover it up.”

But every so often, there’s a narrow window when the Earth, sun and moon align. “Roughly every six months, they actually line up so that we get at least a partial solar eclipse,” Young says. “But we only get these total ones where they're lined up just right about every 18 months.” 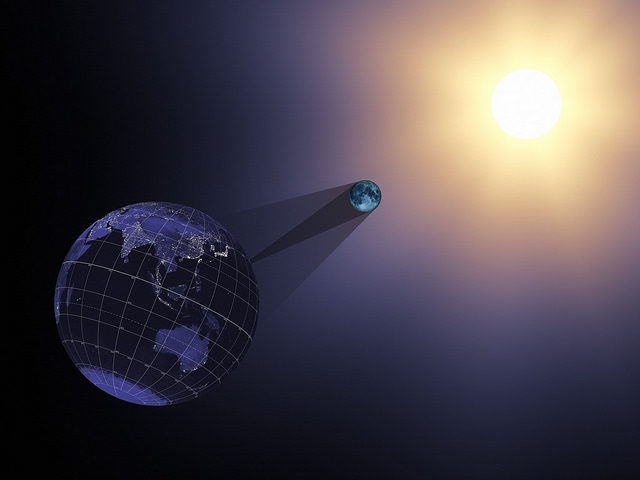 This is an animation of the Aug. 21 eclipse.

Even then, it’s rare for a total solar eclipse to be visible across such a wide swath of the US. The last coast-to-coast eclipse was in 1918, and after this one, the next won’t come until 2045. (Another total solar eclipse will slide across the southern and eastern US before then, however, in 2024.)

So, on Aug. 21, make sure you have your eclipse viewer handy (which you can buy or make — sunglasses won’t be enough to protect your eyes!) And, keep an eye on the weather. “That’s the one thing that I'm most nervous about and I know most eclipse chasers are most nervous about,” Young says. (Check out NOAA’s interactive map for cloud data in your area.)

If you’re lucky enough to be in the path of totality, you may notice a change in the sky’s hue as the shadow moves closer to you, Young says. “The light will start to decrease, temperature will drop, and then at some point, as you get right before the final moment of totality, there'll be this flash of light which is still too bright to look at, but this is called the diamond ring.”

“Then that last little sliver when it just starts to disappear, the last little piece of the sun, it actually breaks up into little tiny beads called Baily's Beads,” he adds. “This is when the light from the sun is shining through the valleys on the moon, so we're actually seeing structure on the moon for that.”

“And then once the moon completely covers the sun, all of a sudden revealed to us is this outer atmosphere of the sun called the corona, which is this silky, ethereal structure,” Young says. “This is actually the region of the sun where solar activity comes from, where space weather comes from, which is something that I study very closely. So everyone is going to see this amazing part of the sun with their own eyes.”

This article is based on an interview that aired on PRI's Science Friday with Ira Flatow. For more information, check out SciFri’s Great American Eclipse spotlight.