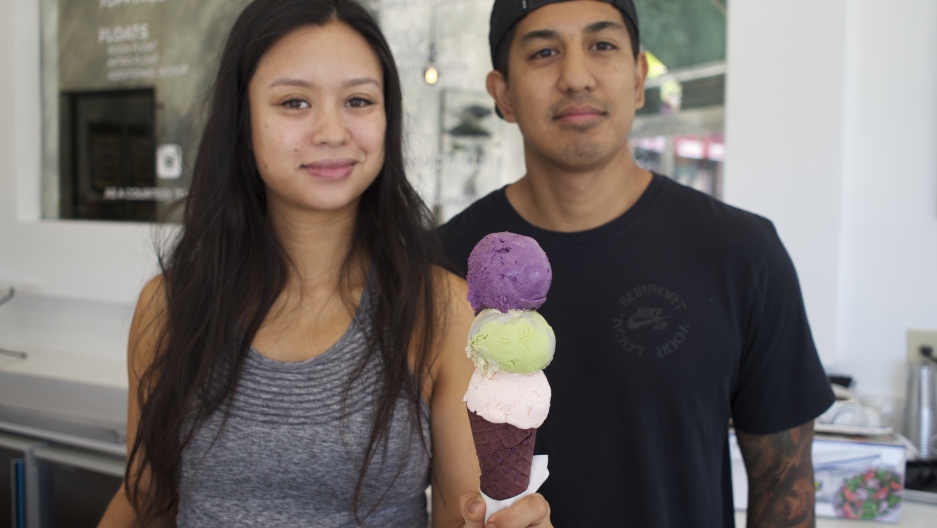 Among life's pressing questions, which ice cream to have poses an eternal conundrum. There's coffee, obviously, and chocolate, but what about raspberry, pistachio, rum raisin and mint chocolate chip? Toppings are a further challenge — sprinkles, whipped cream, hot fudge, the proverbial cherry on top?

So it's a relief to learn that Filipinos have an answer: halo-halo.

The name of the frozen dessert, also made in Singapore, Thailand and Malaysia, translates as “mix-mix,” explains Rachel Ozaeta, a barista at Leelin Bakery, in a district near downtown Los Angeles with a concentration of Filipino-American-owned businesses.

You can take “mix-mix” literally. Ozaeta rattles off the list of today's ingredients as she fills a cup with them — leche flan, jackfruit, sugar palm fruit, coconut cream, mixed beans and Jell-O, topped with shaved ice and evaporated milk. It's the everything bagel philosophy applied to dessert, and it's crowned with a scoop of a gloriously purple ice cream called ube.

Ube, Ozaeta explains, is a tropical yam. It's sweet, slightly nutty and purple. Prince purple. It's a staple in the Philippines. In Los Angeles, it's a neighborhood hit, and not just for Filipino-Americans.

“Latinos ... Indians, Koreans, they all love our halo-halo,” Ozaeta says.

Immigrants and ice cream go way back. A French chef was churning it out in New York back in 1774. At Ellis Island in the 1920s, new arrivals made their own ice cream sandwiches. And at the 1904 World's Fair, it was an immigrant from Syria who rolled up a kind of waffle called a zalabia to make one of the first ice cream cones.

Indian immigrants did not invent the creamsicle, but they could have. India's traditional ice cream, kulfi, is creamy and solid, like a spiced caramel popsicle, without the stick. You can cut it with a knife and eat it with a fork. 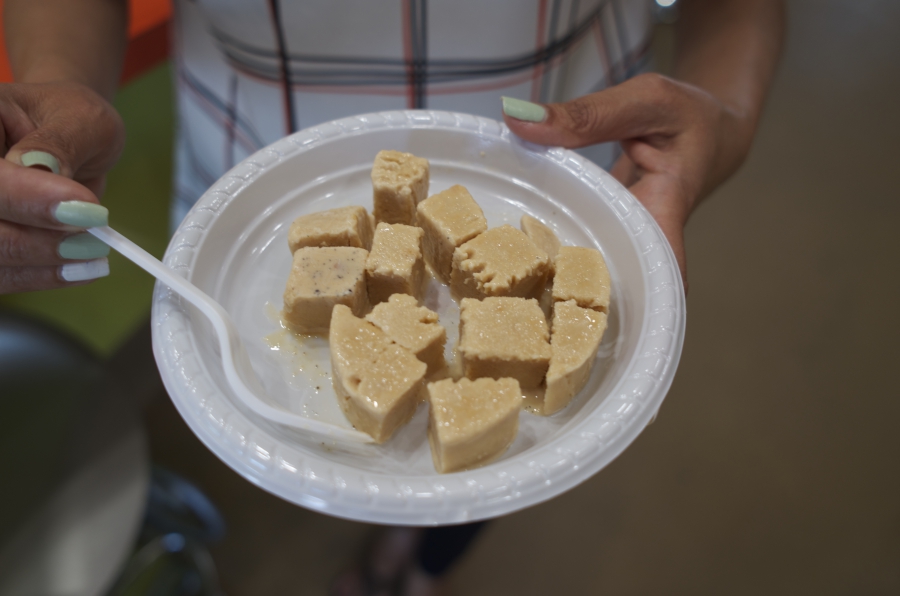 Kulfi, traditional Indian ice cream, is solid, rather than soft. “The interesting thing about kulfi, let's say this kulfi melts, you can put it back in the freezer and it's still kulfi,” explains Indian-American ice cream maker Smita Vasant.

“You can put it back in the freezer and it's still kulfi,” explains Smita Vasant, owner of the shop Saffron Spot in LA's Little India, located in a suburb of Artesia.

The difference with kulfi is how it's made. Compared to ice cream, which is churned to introduce air and a creamy texture, kulfi is frozen in molds. Vasant makes hers the traditional way — stirring down a steaming pot of milk and cream on the stove for hours until it condenses, then adding sugar and spices like cardamom and saffron before freezing. It's a long, laborious process, she says.

Vasant grew up in Mumbai, eating ice creams made with tropical fruits and nuts, cardamom, saffron and fennel seed. In the US, she could never find ice creams that measured up.

“We love vanilla, chocolate — all of this ice cream here is delicious,” she says. “But you still have that memory of what you ate back home.” So she left her job as a corporate health care consultant and started making her kulfi and ice cream with Indian flavors like mango, pistachio, lychee and rose. Vanilla, chocolate and strawberry are her shop's least popular flavors.­

For centuries, ice cream and its sweet frozen relatives have been a global phenomenon. While the notion of freezing sweetened cream dates back to the 16th century, and the royal courts of India and Europe, the ancient Persians were making iced desserts at least 1,000 years earlier. Faloodeh, a Persian dessert made of frozen rice noodles, rosewater and cherry syrup, is said to date back to 400 BC. Later, Iran jumped on the dairy bandwagon too, and an ice cream maker named Akbar Mashti opened Iran's first ice cream shop in Tehran in the 1920s.

In Hollywood, Mehdi Shirvani and his brother Mashti are keeping Persian ice cream traditions alive at their ice cream shop, Mashti Malone, with recipes for faloodeh and ice creams like creamy rosewater, ginger rosewater and saffron gleaned from their uncle, who had an ice cream shop back in Iran. 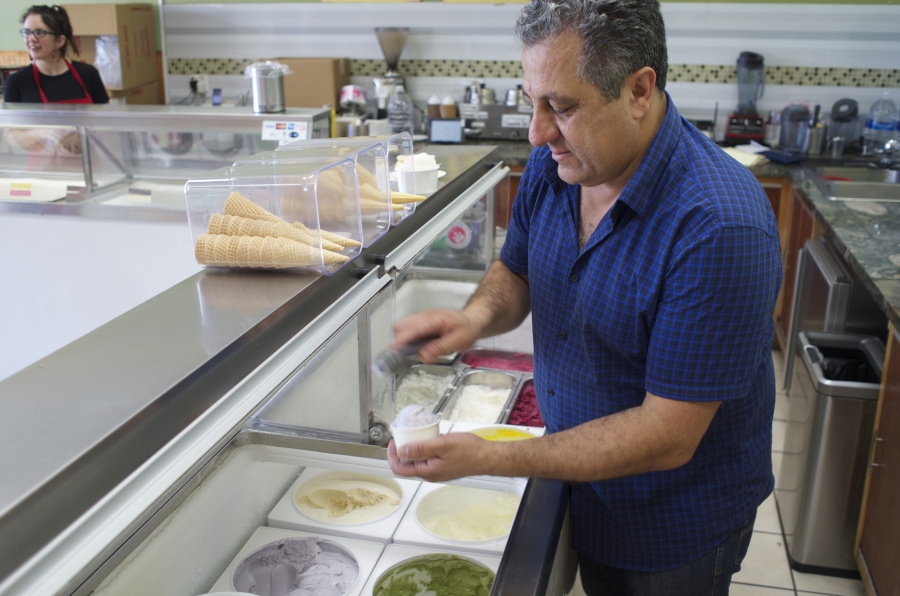 Ice cream maker Mehdi Shirvani, originally from Iran, scoops a cup of lavender ice cream at Mashti Malone's Ice Cream in Hollywood, California. Shirvani and his brother recreate recipes developed by their late uncle, who had an ice cream shop in Iran.

Wielding a scoop, Shirvani leans into a freezer to make me one of his famous ice cream sandwiches — Akbar Mashti-style saffron rosewater ice cream mashed between two thin crosshatched wafers, a memory of his childhood. He says he still eats one “almost” every day.

But there is so much more to taste: Mexican mango chile paletas, Korean bingsoo, or fine-shaved ice with sweet red beans, sesame and soybean powder, and Vietnamese avocado milkshakes. It is tough to get to them all, but there is one person who is an expert in the world of ice cream flavors and their availability in the US. ­Adrienne Borlongan is the founder and chief flavor master at Wanderlust Creamery in LA's San Fernando Valley, a shop that offers everything from Icelandic rye bread ice cream and a Thai-style sticky rice and mango flavor to a Japanese-style Neapolitan with sesame and matcha.

“I wanted to globalize people's palates,” Borlongan explains. “What better way to do that [than] with ice cream?"

It all comes back to ube. Borlongan is from LA, but her parents are from the Philippines, and she grew up eating the bright-purple Filipino yam. 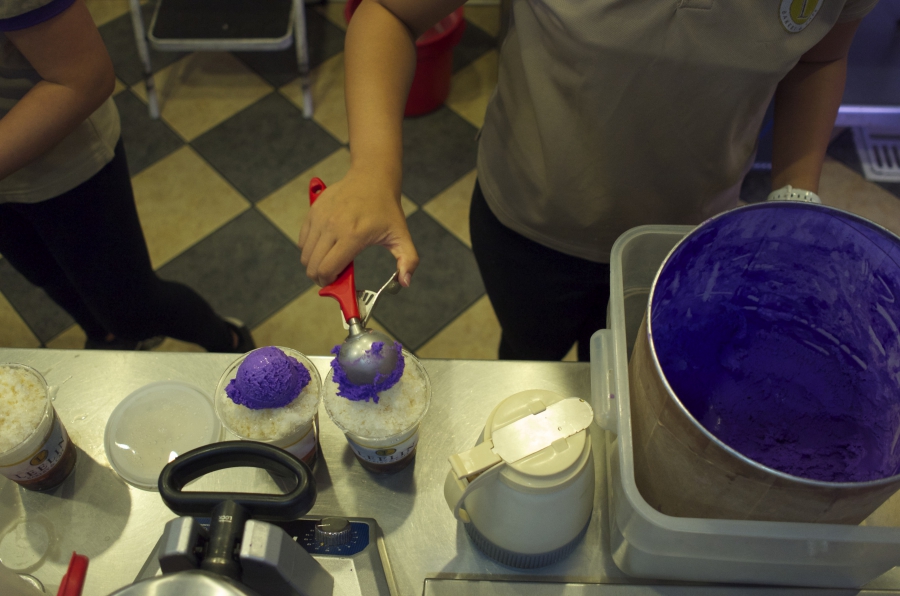 A single scoop of bright-purple ube ice cream, made from the tropical Asian ube yam, tops off an order of halo-halo at Los Angeles' Leelin Bakery.

“When I was growing up and my birthday cake was purple, an ube cake ... kids from my class would be like, ‘What’s that? Ew! I don’t want to try it,’” she says.

However, ube would not be the first imported tropical flavor to go mainstream. Check your freezer. If you have chocolate and vanilla, you can thank Mexico and Guatemala.