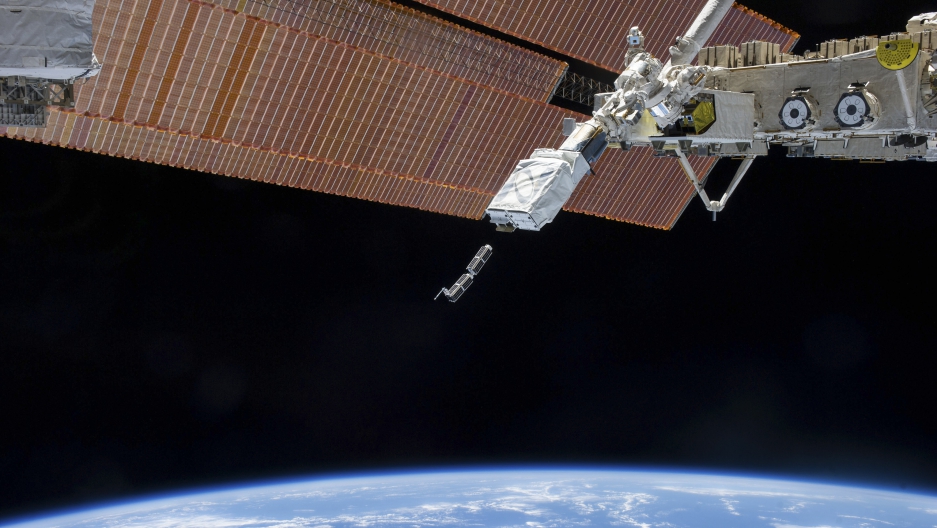 The Small Satellite Orbital Deployer (SSOD), in the grasp of the Kibo laboratory robotic arm, is photographed by an Expedition 38 crew member on the International Space Station as it deploys a set of CubeSats.

It’s a historic moment for the country at a time when several African countries are increasingly interested in space exploration. Just last year, the African Union passed an initiative to help coordinate the efforts of space agencies across the continent.

The GhanaSat-1 was designed by a team of engineers at Ghana’s All Nations University and will send a signal to a ground station at the university.

It’s a CubeSat, a type of miniature satellite used for research that costs about $100,000 and typically weighs less than 3 pounds. It was launched from NASA’s Kennedy Space Center in Florida and delivered to the International Space Station in June.

Dr. Richard Damoah is an associate research scientist at NASA and the director of the university lab that built the satellite. He says that satellite technology has a lot of applications — in Ghana, it could help monitor illegal mining, water use and deforestation, as well as improve cellphone and TV reception.

Damoah says that’s part of the reason the African Union is starting to make space technology a priority. “We think that countries that have gone far in terms of satellite technology have really developed,” he says. “It brings economic benefits to the country, as well as the continent.”

But the engineering team in Ghana didn’t officially have the support of the government when they began their project in 2012. They didn’t get the funding they needed from officials — “perhaps they were skeptical of what we wanted to do,” Damoah said.

Instead, Japan’s national space agency, JAXA, stepped in to offer training and resources. “They recognized we were babies in the field [of satellite technology], and they wanted to nurture us.”

After the successful launch, the government in Ghana has committed to supporting the Space Systems and Technology Lab. President Nana Akufo-Addo personally congratulated the team and has promised to support their next effort — GhanaSat-2.

“Currently, what we’re being told by the government is to bring in our plan as well as our budget [for GhanaSat-2],” said Damoah. “So, that’s what we’re working on now.”