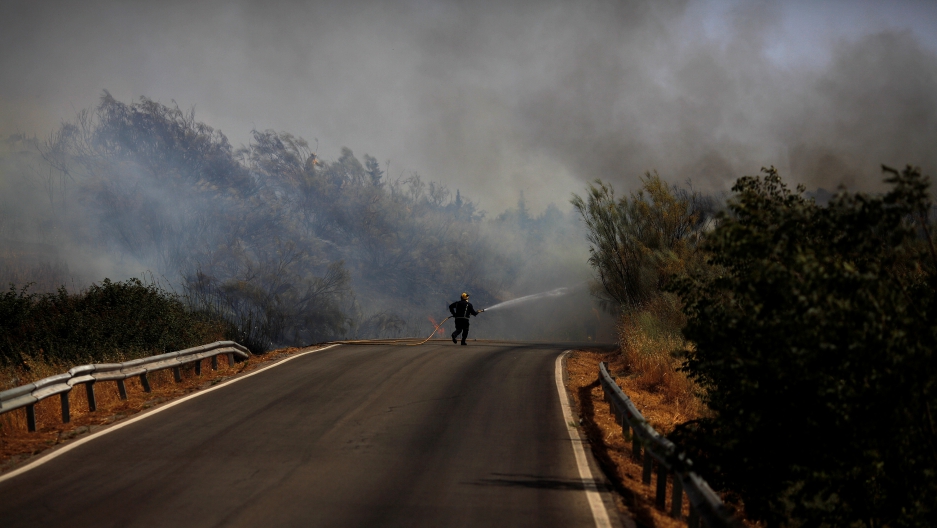 A firefighter works to put out a forest fire during a June heatwave in Southern Spain. Fires have plagued much of southern Europe this summer as the region has been hit by intense heat and drought.

It’s a stark assessment of the realities of the climate crisis, and it seems to have the Trump administration’s rhetoric and policies on climate change directly in its crosshairs.

“The world has warmed ... by about 1.6 degrees Fahrenheit (0.9 degrees Celsius) over the last 150 years ... [and this] has triggered many other changes to the Earth’s climate.”

“The last few years have ... seen record-breaking, climate-related, weather extremes, as well as the warmest years on record for the globe.”

“Temperature ... affects agricultural productivity, energy use, human health, infrastructure, natural ecosystems and many other essential aspects of society and the natural environment.”

“Global climate is projected to continue to change over this century and beyond. ... For the United States, near-term increases of at least 2.5 degrees Fahrenheit (1.4 degrees Celsius) are projected over the next few decades even under significantly reduced future emissions…”

“Many lines of evidence demonstrate that human activities, especially emissions of greenhouse gases, are primarily responsible for observed climate changes in the industrial era. There are no alternative explanations.”

The document containing all these findings and more is a 543-page draft special report from the US Global Change Research Program, a federally-mandated assessment of climate science not yet published but leaked this week to the New York Times.

In many ways the report is a direct challenge to President Donald Trump’s dismissal of concern about climate change, and the contention by EPA administrator Scott Pruitt, Secretary of Energy Rick Perry and others in his administrations that the jury is still out on climate change and humans’ responsibility for it.

But it’s not a gauntlet laid down by outside scientists or activists. It’s an assessment of the latest and best climate science from around the world by 13 federal agencies, including NASA, the EPA and even the Department of Defense, along with a host of leading US scientists. 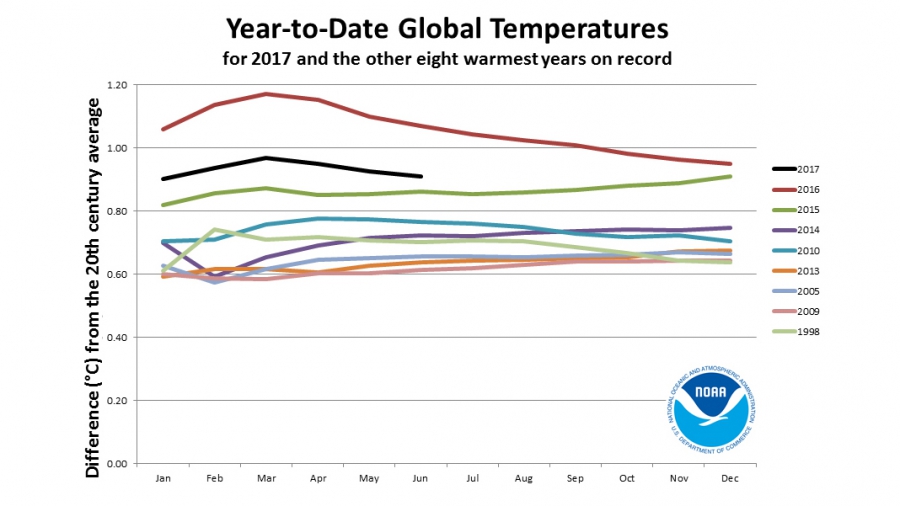 This graphic from the National Oceanic and Atmospheric Administration shows the rapid warming trend of global average temperatures in recent years, including the first half of 2017.

And while it was prepared largely under the Obama administration, it's not a political document. The report, entitled "U.S. Global Change Research Program Climate Science Special Report," is the latest result of a longstanding process going back to 1990 that's been carried out under presidents of both parties with a specific mandate of reviewing and reporting the latest and best climate science — what we know about climate change and what we don't know. The last report was released in 2014.

“This is the most comprehensive science report that has been published outside of the auspices of the Intergovernmental Panel on Climate Change, to my knowledge,” co-lead author Katharine Hayhoe of Texas Tech University told the BBC. “It is also the most up-to-date one, since the latest IPCC report is now four years old.”

Hayhoe says the report brings together that latest science in a way that “presents us with a stark and unyielding picture of the tremendous impacts humans are having on this planet and, moreover, the importance of the decisions that we are making today to reduce and eventually eliminate our carbon emissions.”

Of course decisions are also being made by the Trump administration to reverse efforts to reduce and eliminate carbon emissions, including moves to roll back President Barack Obama’s biggest effort to cut carbon pollution and to pull the US out of the global Paris Agreement to fight climate change.

The scientific report is working its way through the federal review process and, Hayhoe says, “has passed peer review, public review, agency review by all agencies and departments with relevant expertise, and review by a committee of the US National Academy of Sciences that was specially convened with the sole purpose of reviewing this report.”

In other words, it has passed all the usual tests for scientific integrity.

But this is an unusual time, and what remains uncertain is whether the report now pass the test of an administration that has an unprecedented hostility to climate science and to some degree science itself.

“The final draft is now being reviewed by the administration,” Hayhoe said. “If the report is approved, then it is just a matter of logistics before it is published. However, the administration may choose to not approve it, or to request changes.”

If that happens, she said, “the author team will then have to decide whether they can make [those changes] or not.”

The White House has criticized the Times for its reporting on the draft document, but Press Secretary Sarah Huckabee Sanders says it will “withhold comment on any draft report before its scheduled release date.”

The draft report makes clear the depth and breadth of the evidence for how and why the climate is being disrupted.

“Evidence for a changing climate abounds,” the authors state in the report’s executive summary, “from the top of the atmosphere to the depths of the oceans. Thousands of studies conducted by tens of thousands of scientists around the world have documented changes in surface, atmospheric, and oceanic temperatures; melting glaciers; disappearing snow cover; shrinking sea ice; rising sea level; and an increase in atmospheric water vapor. Many lines of evidence demonstrate that human activities, especially emissions of greenhouse (heat-trapping) gases, are primarily responsible for recent observed climate changes."

And it states unequivocally that “greater emissions lead to significantly more warming.”

The leak of the draft report comes amid an unprecedented streak of rapidly rising global temperatures. According to the National Oceanic and Atmospheric Administration, (NOAA), each of the last three years has set a new temperature record, and 11 of the 12 hottest years on record have occurred since 2003.

Scientists expected 2017 to be a bit cooler than 2016 because of the passing of last year’s El Nino warming cycle, but so far it’s been only slightly cooler, making the first half of the year the second-warmest January-June period on record.

As the draft federal climate report was being published, the Pacific Northwest was slowly emerging from a record heat wave and a brutal stretch of hot weather nicknamed “Lucifer” was taxing much of southern and eastern Europe.

Those heat waves have not yet been linked directly to human-influenced climate change, but they might yet be. The draft report documents recent advances in the ability of scientists to detect a climate change impact on many extreme weather events.

More: See all The World's coverage of the climate crisis 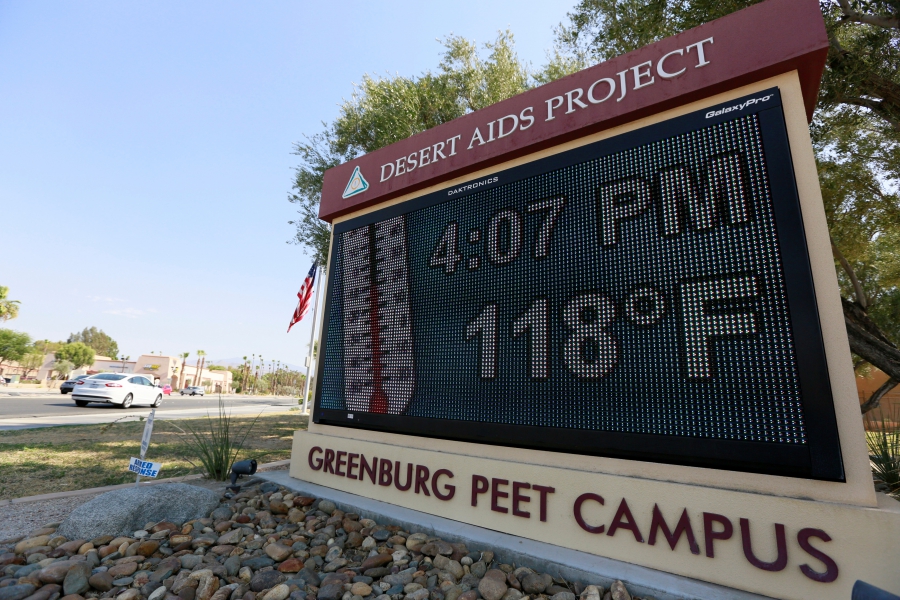