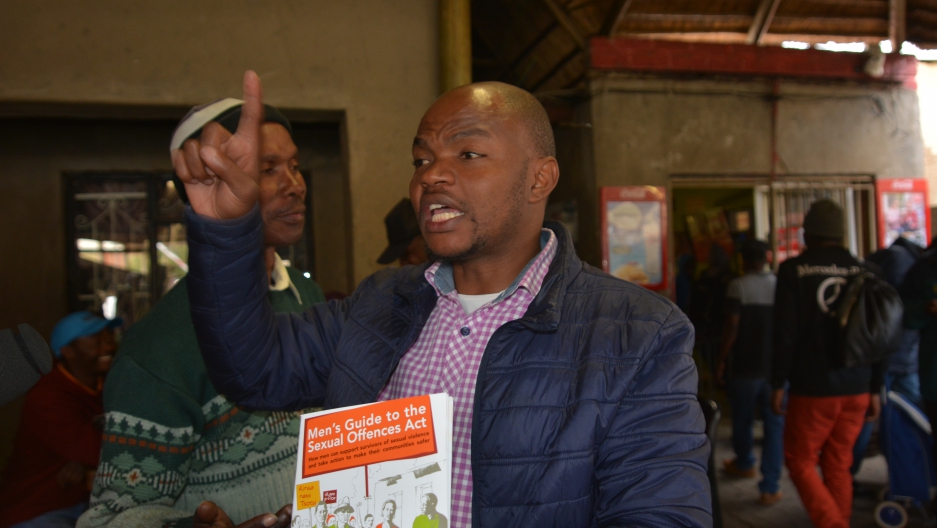 Abu-Baker Sebeela stands in a tavern talking to a room full of men about gender violence.

Ziynda Kamte says she looked out the bus window the whole way to Cape Town.

She says she never stopped looking back. She was terrified that he would pop into her view, coming to get her and their two kids.

“My husband — he changed,” Kamte explains. “He started being abusive, beating me, treating me like nothing. There were days in which he would come home at 4 a.m. And he just wanted us to jam into it, and make love.” 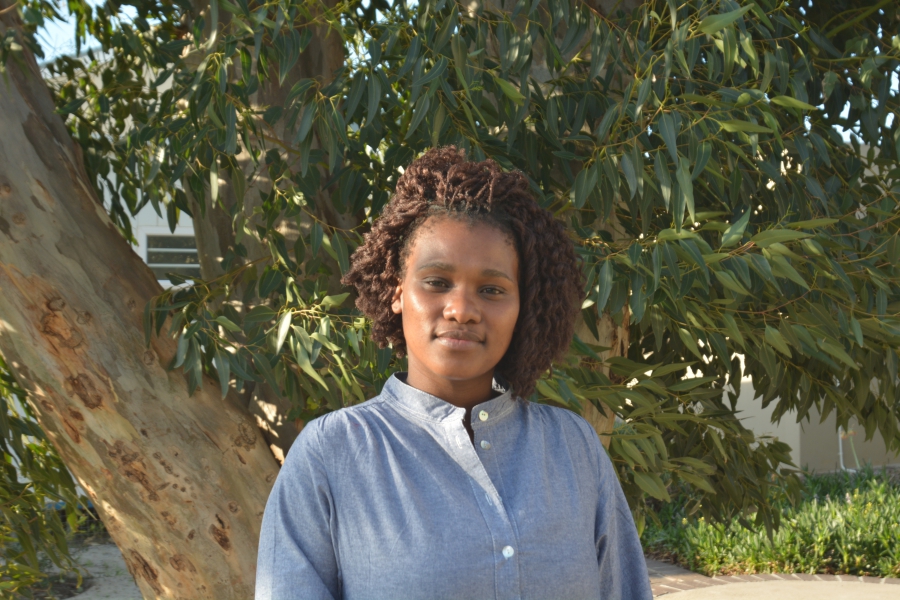 Kamte was terrified of getting HIV. South Africa is the country with the highest number of HIV infections in the world. Nearly 20 percent of the adult population is HIV positive. And Kamte had seen this play out before: Years earlier, her aunt had died a slow, painful death from an AIDS-related illness.

“We used to visit her in hospital,” says Kamte. “You could tell, this is something different. She had [AIDS]. But at the time, people were not being honest about it.”

Kamte is 32. Her generation of South Africans has been educated about HIV, and how to prevent infection. But she says her husband was enraged by the idea of using a condom with his own wife. “And then he would beat me up. Because I said no. I refused. I was trying to protect myself. But he didn’t see it that way.”

There is a lesser known, silent epidemic here in South Africa. This country also has one of the highest rates of rape in the world.

“We’ve got to address the sexual violence because that is really driving HIV in this country," says sex therapist Dr. Marlene Wasserman. “And it still does.”

Wasserman grew up during apartheid, a brutal system that kept the minority whites in power. She says the system was built in part on a myth: “White women have to be scared, black men are going to kill you, or rape you,” she recalls.

When apartheid fell, in the mid-'90s, Wasserman says there was a wave of rape reports, but not along the lines of that racialized myth. “Then it became more and more evident, once the sensationalism of it died and once people found a voice, what was really going on.”

Wasserman says a lot of the men who rape are trauma survivors themselves. This is a country with a history of racial and class violence. And when apartheid ended, things were supposed to change. “You’ve got people who are economically, absolutely, absolutely poverty-stricken, and powerless,” explains Wasserman. “And so, when you have that as a foundation, men who are powerless and not able to provide for themselves and their family, there’s a huge amount of anger. There’s a huge amount of violence.”

Most of the time it manifests as what’s referred to as intimate partner violence.

A bar outside of Soweto, where the air is thick with marijuana smoke, is the realm of men. It’s cold and dark; men in jackets nurse bottles of beer, playing pool.

Abu-Baker Sebeela is a familiar face at these taverns. There’s only one woman here, she’s sitting in a corner. As Sebeela walks by the woman asks, “Did you come here to teach me how to have sex?”

The short answer is, yes.

Sebeela and his team work for a nonprofit called Sonke Gender Justice. They talk to men throughout Johannesburg, about violence, and HIV, and how one often leads to another.

Related: These South African men tackle violence against women — starting with themselves

The men stare, glassy-eyed as Sebeela talks to the crowd. When he’s done, a few come up to him. One guy wants to know where he can get tested for HIV. Another man wants to report a rape. But mostly there are a lot of slurred jokes

“It is quite frustrating,” Sebeela says.

It doesn’t help that the South African legal system has been slow to recognize violence against women. It wasn’t until 2012 that the first marital rape case was won. That’s why he keeps coming back to these bars.

“What we have seen in the work that we do is, actually, men are more open when they are in such spaces, and when they are intoxicated,” says Sebeela. “They speak their mind and how they feel.”

There are myriad ways to stop HIV in South Africa. Among them: making condoms available to everyone, encouraging abstinence and encouraging people to get tested and know their status.

But when it comes to eliminating the violence that is fueling this epidemic, the answer is not just in a health clinic. The answer is also right here. In a dim bar in Johannesburg.