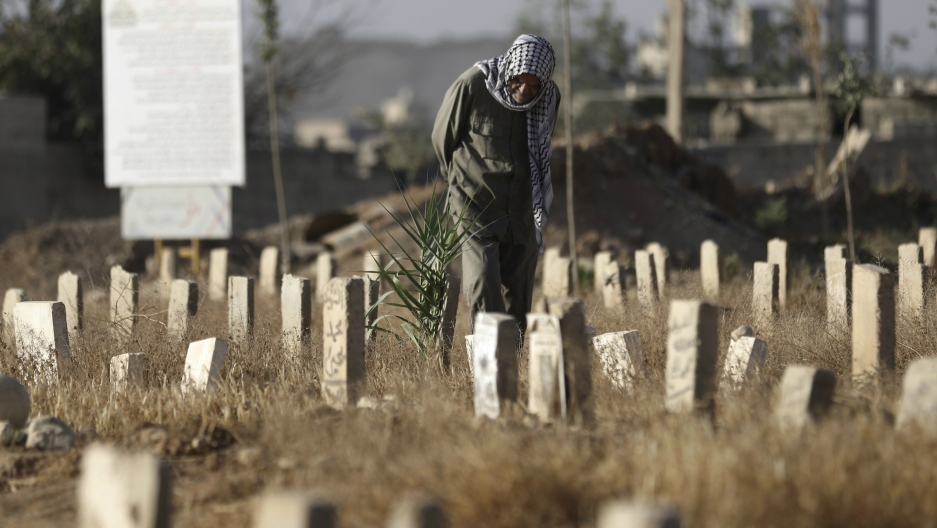 Umm Mohamad, a 60-year-old Damascus resident, sets aside a small sum of money from her retirement pension every month, with the aim of saving up around $900 to cover one year of rent for a burial plot in the Nazha cemetery, located on the outskirts of the capital.

“Before the Syrian revolution, the grave used to cost between $200 and $400” with no yearly fee, she said by telephone, adding that in some cases families could secure a free burial spot in graveyards in the suburbs.

However, since the start of the war, the capital’s 33 cemeteries are at capacity, and prices have soared. Profiteers have leveraged this strain on graveyards in the capital to squeeze some money out of the high demand for burial plots by renting out graves, as one would apartments, for one-year periods.

Though the practice is formally banned by the Syrian government, residents in the capital tell Syria Deeply that employees of the state-run directorate for graves and grave diggers working in the capital’s cemeteries are renting out abandoned and unused plots for up to $1,000 per year.

This black-market graveyard trade stands to show that in Syria’s war economy, there’s money to be made wherever there is death and disaster.

“My sister lost her life and left behind three children. We had no choice but to rent a grave, since the prices of graves became unrealistically high."

Accurate statistics for death tolls in Damascus are hard to come by, but according to the Syrian Network for Human Rights, at least 5,381 civilians have been killed in Syria in the first half of 2017, bringing the total number of people killed since the start of the conflict in 2011 to more than 400,000 people. This does not take into account those who have died from natural or non-war-related causes.

As the seat of power of President Bashar al-Assad, the capital sees significantly lower death tolls than flashpoint areas such as the ISIS-held cities of Raqqa and Deir Ezzor or rebel strongholds in Idlib and the Eastern Ghouta suburbs of Damascus. Nonetheless, Damascus is repeatedly targeted by suicide attacks and has been subject to shelling by rebels based in a nearby opposition enclave.

The rising death toll since the start of the conflict means that, although some burial spots are available for sale, they tend to be rare and extremely expensive, Damascus residents told Syria Deeply. For this reason, many residents have had no choice but to rent out abandoned or unused graves yearly. By paying in smaller annual increments, resident’s of the capital can find ways to secure the money.

Two months ago, Kamel, a 40-year-old Damascus resident, decided to rent a burial spot for his deceased brother in the capital’s Bab Saghir cemetery. Unlike the thousands who have died as casualties of war, Kamel’s brother died of a heart attack, but the process of laying him to rest was no less difficult.

He used informal connections he had with an employee at the state-run General Directorate of Graves, who agreed to rent him a plot of land for around $970 per year. Kamel paid the money in advance, and on the day of his brother’s funeral, the only proof he had of the entire process was his brother’s name etched on a tombstone. No official papers were submitted, and Kamel wasn’t given any document certifying his ownership over the plot.

Though he says he does not believe he was duped, other residents who had undergone the same informal process suffered greatly because of the lack of certification.

“The only proof we had was the tombstone. We had no receipt or contract, and unfortunately this caused us trouble later,” Um Ahmad, a 60-year old Damascus resident, who had to bury her sister, told Syria Deeply.

The mother of two, whose sister was killed last year by an errant mortar shell, struck a deal with a driver who works at the directorate of graves. He agreed to secure her an abandoned grave in the Dahdah Cemetery if she paid around $1,000 per year for the burial spot.

“My sister lost her life and left behind three children. We had no choice but to rent a grave, since the prices of graves became unrealistically high,” she said.

When Um Ahmad returned to the Dahdah Cemetery this year to renew her annual payment, she said that she had found a new name etched on her sister’s tombstone. She was told by the man who rented her the plot that her three-day delay in securing the payment had prompted him to bury another corpse in the same grave and replace the name on the tombstone.

Um Ahmed said she filed a complaint with the grave’s directorate.

“All those working at the bureau denied that such a business is taking place, and since I do not have any official papers, I could not do anything about it,” she said. “I am certain that they all know, and that they run this business together. What hurts me the most is that we have lost the body of my sister and no one is willing to help us.”

Um Ahmed is not the only Damascus resident to have come out on the losing end of the graveyard trade deals. Abu Omar, a 45-year-old public employee in the capital’s state-run electricity company, lost hundreds of dollars when he tried to bury his mother last month.

He struck a deal with a gravedigger who works in the Bab Saghir cemetery, and said that he would give him a $500 down payment for a grave and then pay the remaining sum during the funeral.

“I contacted the same person on Friday morning, and we agreed to have the burial in the early evening. Right after the prayers, we went to the cemetery, only to find it closed,” Abu Omar said. “We were frustrated and when we began to yell, a man [who worked there] came. When I told him what had happened, he said that I had been the victim of fraud.”

Abu Omar finally managed to bury his mother in al-Nazha in the capital’s suburbs. He says he is not able to visit his mother’s grave as regularly as he would like because of the cemetery’s distance from Damascus. He said he submitted a complaint to the graves directorate but received no answer.

He says all he could do was tell his story.

Ahmad Zaza reported from Istanbul. This article originally appeared on Syria Deeply, and you can find the original here. For important news about the war in Syria, you can sign up to the Syria Deeply email list.