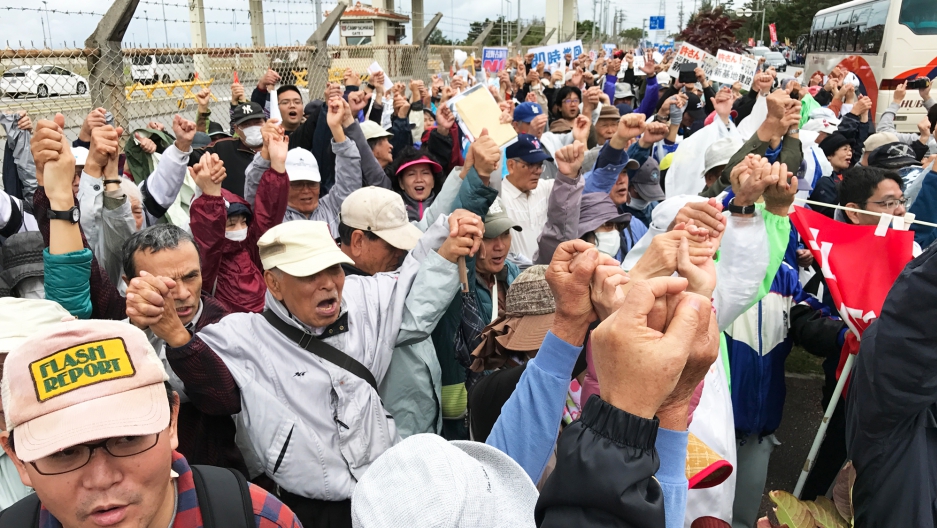 Protesters demonstrate outside a US Marine base on Okinawa. The US plans to greatly expand the base in the rural fishing village of Henoko.

Since World War II, the US has operated a large military base in the central part of Okinawa — a now-crowded island city in Japan's southernmost prefecture. More than half of about 50,000 US service members in Japan are stationed on Okinawa.

Now, the US and Japanese governments are planning to move the Marine base to a more pristine place — the rural fishing village of Henoko. There's already a small base there, but locals are waging a major fight against the expansion.

More than 2,000 protesters recently gathered near the site of the expansion, where construction of the seawall is already underway.

"They are going to build two, huge V-shaped runways that are 1,800 meters long and 10 meters high," said Mayor Susumu Inamine. "These will be an enormous concrete mass right here in the sea."

Okinawa’s leaders have tried to stop the base in Henoko by denying construction permits and going to court. But the Japanese Supreme Court last year allowed work to proceed. Residents have raised a variety of concerns, including aircraft noise and the base's effect on the environment.

"My town would have the worst noise from the military airplanes," said Etsuko Urashima, who lives a few miles away from the new base site. "People here worry if they can really continue to live in the area after the runways are built." 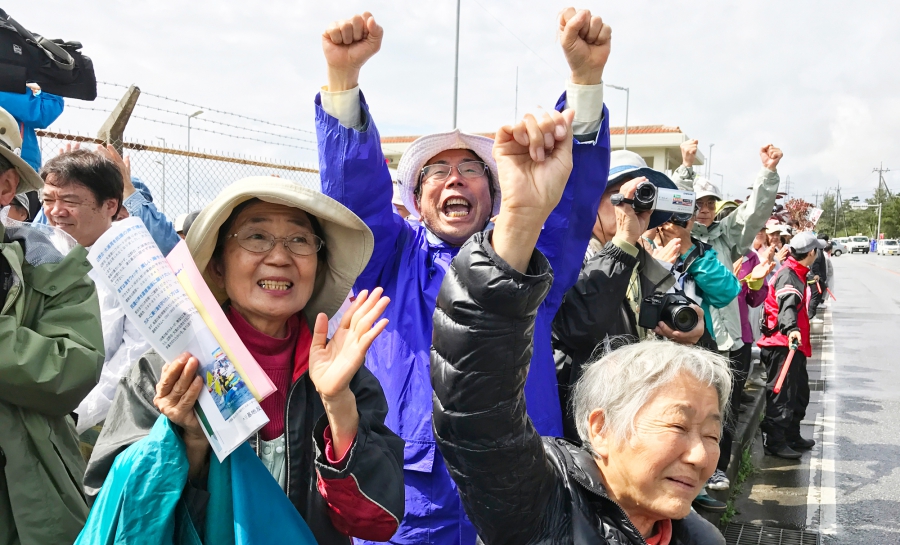 Etsuko Urashima (left) and other protesters rally against the expansion of a US Marine Corps base in the northern part of Okinawa island. Urashima is concerned about the construction of runways in the coastal waters.

But the US and Japanese governments are not backing down, especially in light of renewed threats from North Korea.

"The United States' troop presence in Okinawa remains fundamental to fulfilling our treaty commitment to Japan's defense," said Pentagon spokesman Gary Ross in a prepared statement. "The United States embraces a commitment to maintain good relations with the local communities on Okinawa and continues to be cognizant of the footprint of our military presence."

However, maintaining those good relations is a challenge for the Marine Corps. And it's about more than noise and the environment. Much of the friction on Okinawa concerns the behavior of American troops.

According to police, US troops have committed more than 500 "heinous" crimes on Okinawa since 1972, the year the US handed control of the island to the Japanese government. They include the gang rape of a 12-year-old-girl in 1995, and the rape and murder of a local woman by a former Marine last year. That crime led to huge protests on the island.

"This incident occurred because the military bases are here," said City Councilwoman Kumiko Onaga, who knew the woman’s family. "There are many who have been raped, who are bearing the pain of it in silence, and there are women who have died, like this woman."

Experts say the US is encountering a lot of tension not just on Okinawa, but also in other places around the world where there are American military bases, especially East Asia, the Middle East and parts of Europe.

"Managing local feelings about the American military presence is always complicated," said Michael O’Hanlon, a military analyst at the Brookings Institution. "You've got to try to find the best possible solution because what you really don't want is a showdown where you're ultimately just told to leave with very little warning, and that's the worse case scenario for us."

But managing local feelings on Okinawa could be a challenge as protests against the base continue to get bigger, especially as construction moves full speed ahead.

Sonia Narang reported in Japan with support from the International Center for Journalists (ICFJ).