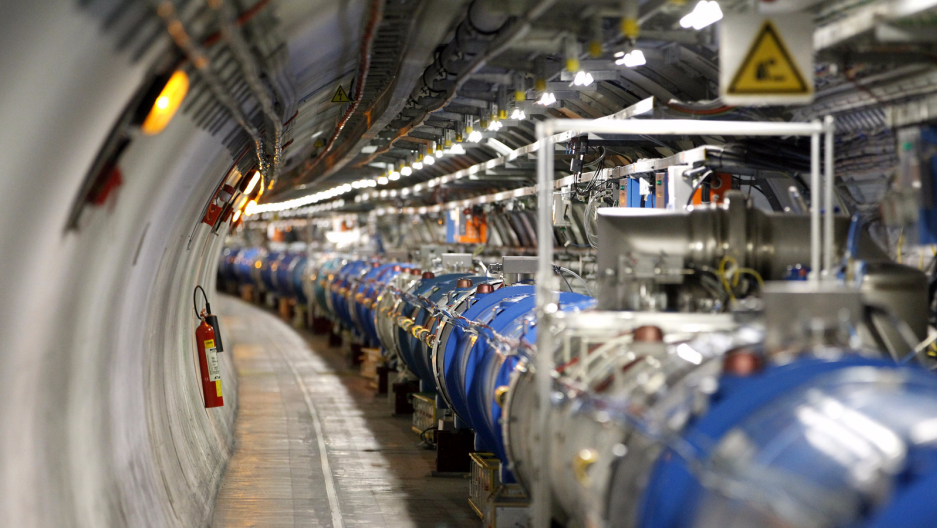 A general view of the Large Hadron Collider (LHC) experiment is seen during a media visit at the European Organization for Nuclear Research (CERN) in the French village of Saint-Genis-Pouilly near Geneva in Switzerland, July 23, 2014.

In physics, the Standard Model describes how particles like quarks, leptons and bosons should interact. But as a review paper detailed in the journal Nature in June, recent experiments at particle colliders around the world have turned up anomalies that the rule book doesn’t quite account for.

Specifically, observations from the experiments — conducted at particle colliders in Switzerland, Japan and the United States — challenge an assumption of the Standard Model known as lepton universality, which describes how charged lepton particles like electrons, muons and taus should interact.

“These three particles — the electron, the muon, and the tau — the only differences between them should really be their masses,” says Pearl Sandick, a theoretical physicist at the University of Utah. “So according to the Standard Model, they should [all] act the same way under the weak nuclear force. They should have the same types of interactions.”

But in the experiments, when physicists studied the decay of a particle called a B-meson after collision, they observed more tau particles in the mix than the Standard Model accounts for.

Further confirmation is still needed before the physics community decides to revise or strike down lepton universality. But taken together, the three results challenge the assumption at the level of four standard deviations, indicating 99.95 percent certainty. “So we’re still waiting to see, but this is definitely an interesting indication,” Sandick says.

If the results are confirmed, explaining the anomalies could push physics into exciting new territory. As Sandick puts it, “There are a couple possible explanations, and they all have to do with new particles, basically.”

One explanation, she says, could be a weak nuclear force that taus feel differently than electrons or muons do. “There’s a new particle that carries that new force, and we would call it a W’, an analogy with the W boson that carries the normal weak force,” she explains. “So that’s one possibility. A second possibility is that there’s actually a new type of Higgs boson.”

The Higgs boson famously discovered in 2012 at CERN’s Large Hadron Collider has no electric charge, she points out. “But the particle that would be needed to explain these results actually does need to have an electric charge,” she says. “So there could be a new charged Higgs boson that’s maybe heavier, heavy enough that we haven’t seen it yet at the LHC. So that’s a possibility.”

The third possibility, she notes, has to do with the fact that the strange events in all three experiments involve both leptons and quarks. (The decaying mesons are composed of quarks and antiquarks.) “And so there could be some type of new particle that actually talks to both leptons and quarks,” she says. “We would call that a leptoquark, and there are models of leptoquarks that might explain this as well.”

The anomalies have another tantalizing potential link: to dark matter. “At this point, there’s not an obvious connection, but it’s certainly possible,” Sandick says. “And one of the things that might connect to this anomalous result with the need for dark matter is something called supersymmetry.”

“So if this supersymmetry exists, then what that means is that, at a minimum, there are twice as many particles as there are in the Standard Model alone,” she says. “One of those new particles could very likely be dark matter, and it just happens to work out that you get roughly the right amount of dark matter left over in the universe.”

For now, Sandick and other physicists are eagerly awaiting more data. “These types of experiments that are being done, that look for anomalies — not necessarily just new particles, but that look for other indirect signals of new physics — are really important,” Sandick says.

Scientists already know there must be something beyond the Standard Model, she says. “The Standard Model only includes three of the four fundamental forces,” she explains: strong force, weak force, and electromagnetic force. “Gravity is not included.”

“Dark matter — no explanation for dark matter is anywhere in the Standard Model,” she adds. “And so there are reasons why we think there’s something else.”