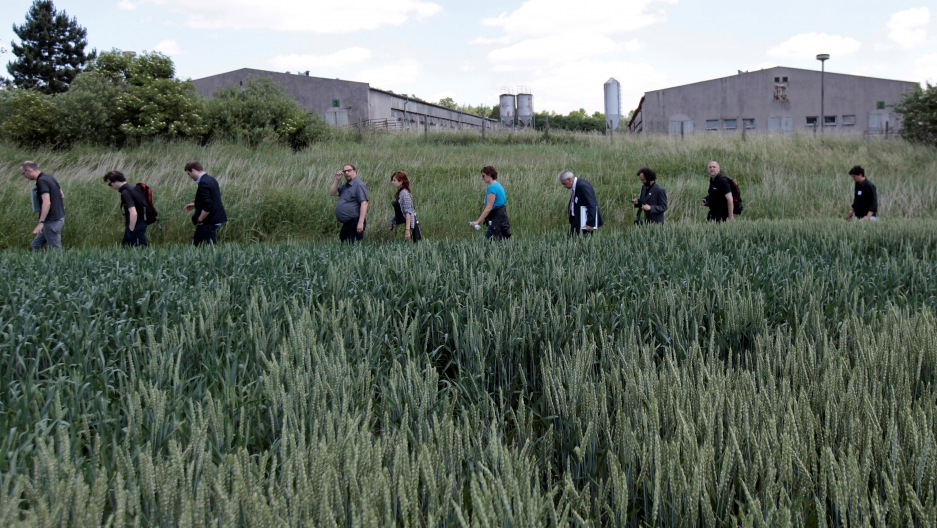 Participants of the European Meeting of Antiracist Leaders walk past a pig farm, situated at the site of a former Roma concentration camp, to commemorate victims of the Holocaust in the village of Lety, June 13, 2014.

The Czech government said Monday it had struck a deal to move a pig farm from the site of a former Nazi concentration camp where hundreds of Roma perished during World War II.

Czech culture ministry spokeswoman Simona Cigankova said the contract for the property would be "finalized by September", but declined to name a sum.

Between 1940 and 1943, Nazi Germany and its Czech collaborators imprisoned close to 1,300 Czech Roma at the concentration camp, located in Lety, a village 75 kilometres (50 miles) south of the capital Prague.

In all, 327 Roma, including 241 children, died at the camp staffed by an ethnic Czech commander and guards, while more than 500 were sent to Nazi Germany's infamous Auschwitz-Birkenau death camp in occupied southern Poland.

The communist Czechoslovak regime built the pig farm on the site in the 1970s.

Jan Cech, an executive with the Agpi firm that now owns the farm, confirmed it had accepted the government offer and that it expected the property to change hands before the October general election.

Benjamin Abtan, an activist heading the European Grassroots Antiracism Movement (EGAM), hailed Monday's development as being "historic for the dignity of the Roma people."

The leftist-led Czech government promised in 2016 to buy out the farm before the election, but activists had feared that infighting among the three coalition parties could scupper a deal.

Abtan and dozens of activists from across Europe had protested at the site in June to pressure Czech authorities to make good on their promise.

Activists also began lobbying the European Union in May last year to halt subsidies paid to the farm.

Alongside European Jews, the continent's smaller Roma minority was a target of Nazi genocide during World War II.

Of the roughly one million Roma who lived in Europe prior to World War II, historians believe that Nazi Germany killed over half.