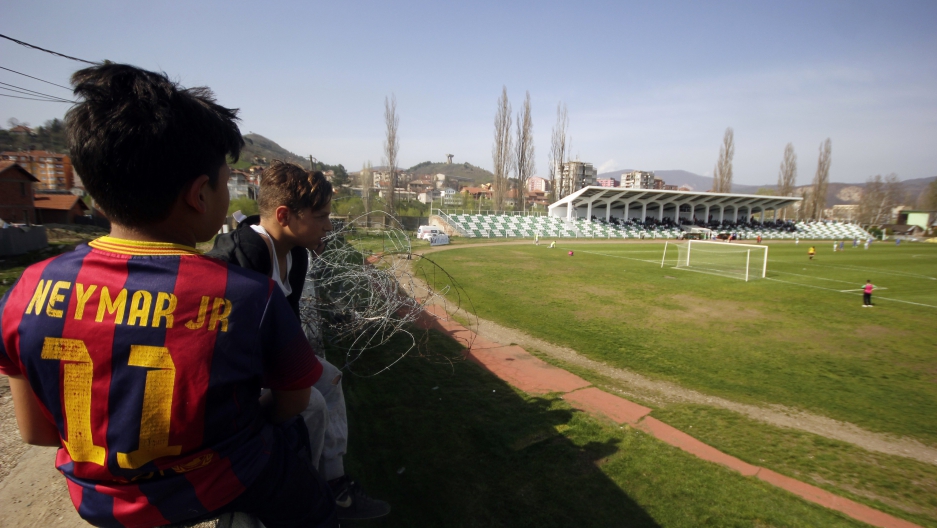 Roma community boys sit on the wall around Riza Lushta stadium as they watch the Kosovo's superleague soccer match between KF Trepca '89 and KF Istogu in Mitrovica, Kosovo, April 3, 2016.

Kosovo's Roma minority "are not treated as humans," laments Florim Masurica, who is seeking justice for his disabled son, one of the children suffering from suspected lead-poisoning contracted at post-war United Nations camps.

Kosovo's pro-independence ethnic Albanian rebels saw Roma people as guilty of cooperation with Serbs during the 1998-1999 conflict — a gratuitous accusation as Roma largely kept out of the fighting.

But some of them faced summary executions, while others were forced to flee from their homes that were looted and destroyed after the departure of Serb forces from Kosovo following a NATO bombing campaign.

That was the case in the Roma neighbourhood of Mahalla in Kosovo's northern city of Mitrovica.

Around 600 of its inhabitants were given shelter by the UN mission in Kosovo (UNMIK) in five camps, initially meant as a temporary measure for 45 days, but they ended up staying six years.

Living near a heavy metals mining complex, these displaced people were unaware that they were breathing in air and trampling on soil contaminated with lead and other toxins, as scientific tests have showed.

In 2005, human rights groups became concerned by the symptoms of Roma children in the camps such as black gums, headaches, learning difficulties, convulsions and high blood pressure.

UNMIK then evacuated the camps — but for some of its residents this was too late.

Bajram Babajboks, 65, claims that there was no single member of his family — four daughters, seven sons and 60 nieces and nephews — "who is not a victim of lead toxins".

"It's the doctors who say it," he told AFP, showing the latest blood test results.

In February 2006, a panel of experts appointed by the UN — following complaints by 138 Roma — came up with a 79-page report examining the claims of poisoning.

It cited tests conducted by the World Health Organization in 2004, showing most children in the most exposed camps had "above acceptable" lead levels in their blood and that "more than 80 percent of soils in the camps were 'unsafe' because of lead contamination."

An environmental medicine specialist, Klaus-Dietrich Runow, took hair tests in the camps in 2005 with "the highest ever seen (results) in the values of heavy metal in human hair samples".

The panel concluded that UNMIK had failed "to comply with applicable human rights standards in response to the adverse health condition caused by lead contamination in the IDP camps and the consequent harms suffered by the complainants".

Piles of industrial waste still litter the ground where the now-dismantled tents of the Zitkovac camp once stood. Contaminated dust "covered the camp as soon as the wind blew," recalled Veli Jashari.

"My son was born disabled, with his legs paralyed," said the 58-year-old, as his son Jetullah, seated in a wheelchair, watched other children playing with a small stray dog.

"I dream of standing on my feet someday. I want to be like the others. I want to go to school," said Jetullah, now 16.

Jashari said his second son, 5-year-old Sejdullah, was also paralyzed — although he was born after the family left the camp. His father suspects he inherited the lead-poisoning.

According to the WHO, children are "particularly vulnerable to the neurotoxic effects of lead, and even relatively low levels of exposure can cause serious and in some cases irreversible neurological damage".

But no exhaustive survey of the camps' victims has been done — which, to the Roma community, is additional evidence of discrimination.

UN Secretary-General Antonio Guterres in May this year expressed the organisation's "profound regret for the suffering endured by all individuals" living in the camps.

As an "exceptional measure," he decided to set up a trust fund to implement assistance projects for the Roma community.

But Kujtim Pacaku, a former Roma MP in Kosovo's parliament, said it was "immoral to make up for the mass abuse only with money."

Like other Romas calling for justice, he wants the case investigated and accountability established before sending "a message to everyone: you cannot treat people like that just because they are Roma."

In June, Human Rights Watch said that the "UN's refusal to take responsibility here undermines its ability to press governments to remedy their own human rights abuses."

Artan Bajrami, 36, said he "would have never agreed to go to a camp" if he had known about "the danger that was waiting there".

Born in one of the camps, his 15-year-old son walks with a limp because of a deformity on his foot.

In addition, Masurica cannot go to school "because he stutters, is mentally behind, and plays only with small kids," said his mother Elhame, 33, who gave birth to him in 2001 in the Cesmin Lug camp.

Thanks to international aid, particularly from the European Union, permanent new houses have been built in Mahalla.

But in addition to the unemployment and poverty that face Roma people throughout the Balkans, those in Mitrovica still deal with the area's toxic fallout.

"This is not the Roma Mahalla any longer. It is a lead-poisoned neighborhood," Babajboks said.