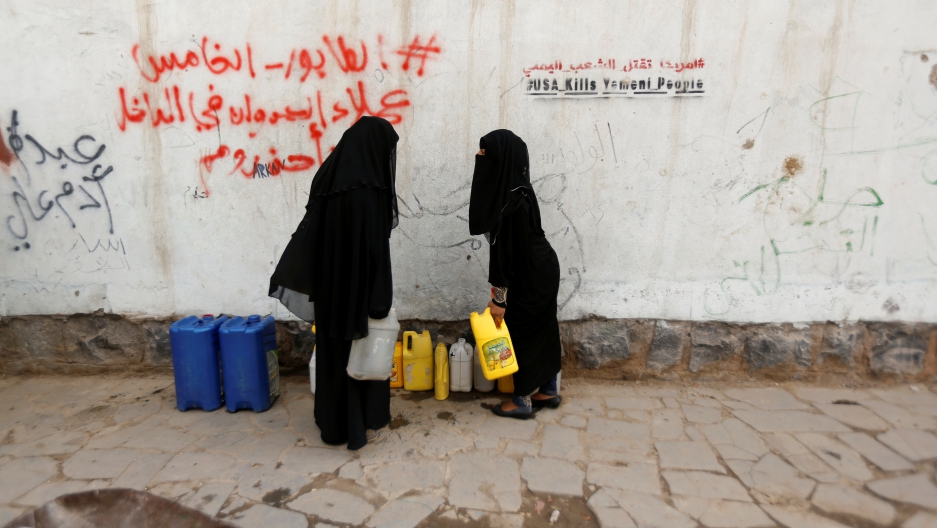 Women carry jerrycans after they filled them up with drinking water from a charity tap, amid a cholera outbreak, in Sanaa. Graffiti on the wall reads "USA kills Yemeni people."

In 2014, Matthew Tueller, a career US diplomat, had barely settled into his new post in Sanaa, the capital city of Yemen, when a civil war began. Tueller is still the US Ambassador to Yemen, but his embassy is now located more than 500 miles away in Jeddah, Saudi Arabia, far from the fighting — and an unfolding humanitarian crisis.

“We had to close down our embassy and move the core embassy staff away, primarily in Saudi Arabia, where we continue to try to engage,” Tueller explains.

Engagement has been a struggle for diplomats such as Tueller, who has been trying to encourage people in Yemen to talk with each other and work out their differences — but from a distance.

“What we largely are doing is engaging with all of the elements of Yemeni society that are in exile,” he says, “and we devise unique and creative means in order to stay in contact with allies ... inside Yemen. And then, of course, we also engage regularly with the governments of the Arab coalition, Saudi Arabia and the [United Arab] Emirates particularly."

Yemen has a long history of instability, but the current fighting dates back to 2014, when a UN-sponsored democratic initiative failed to unite the country, post-Arab Spring. A militant Yemeni religious group joined forces with a former Yemeni dictator to overthrow Yemeni President Abd-Rabbu Mansour Hadi. 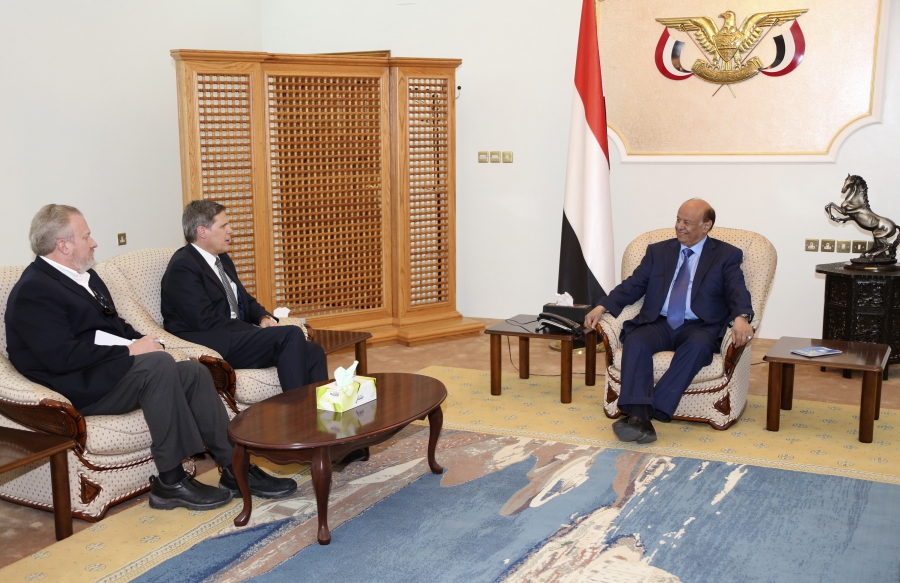 In March 2015, Hadi called on Saudi Arabia to help restore his government to power. The Saudis formed a coalition of Arab countries, backed by the US, to try to bomb Yemen's rebels into submission.

Meanwhile, Tueller stays on the job, trying to guide the key players in the war toward renewed negotiations. “The political solution obviously is one that is going to involve all sides to this, both the legitimate government as well as those who are seeking to overthrow the legitimate government ... and for the sake of the citizens there’s going to have to be some give on all sides.”

The United Nations has tried repeatedly to broker a peace deal between the main combatants: the government of President Hadi (which operates from Saudi Arabia with military support from the Saudis and the US) and the northern rebel group known as the Houthis (who are allied with longtime Yemeni dictator Ali Abdullah Saleh). The Houthi/Saleh rebels receive support — it's unclear how substantial — from Iran.

For the Hadi government, the war is a struggle to regain power and lead Yemen's central government. For the Saudis, it is an existential conflict with its regional economic, political and religious rival, Iran.

Part of Tueller's job is to determine America's role in this murky conflict and to defend the interests of its key ally in the Middle East, Saudi Arabia.

"We certainly are a major partner in Saudi Arabia and the security, we provide weapons," he says. "But the conflict in Yemen is not a conflict between Saudis and Yemenis," he is quick to add. "It is a conflict between Yemenis. The Saudis have intervened on behalf of the Yemenis who feel that they have a weaker military position and who want to try to resume that peaceful transition."

Due to Saudi-led bombing and blockade, 60% of Yemen's 27M people don't know where their next meal is coming from. https://t.co/Qqp0CiBJPp

Humanitarian groups have raised alarms over conditions in Yemen, including a cholera epidemic, a possible famine and an economic crash that they blame on the war. Some, including the International Committee of the Red Cross, are calling on warring parties to ease the fighting so that food, fuel and other relief can be delivered to Yemenis struggling with disease, hunger and extreme poverty.

But, Tueller says, the US is not in a position to enforce a ceasefire.

“We simply don't have leverage over the groups that are actually fighting on the ground,” he says. “This is a civil war. This is Yemenis fighting against Yemenis. And until we have some mechanism to get the Yemenis to step back and make political compromises the conflict is going to go on.”

Not everyone agrees that the US is without leverage.

“The United States is choosing not to have influence over the warring parties in Yemen,” says Katherine Zimmerman, who follows events in Yemen for the American Enterprise Institute in Washington. “We are constraining ourselves ... in terms of who we're talking to and how we are engaging with them.”

To be sure, Tueller and the embassy staff are not slacking. “A lot of us are on the road an awful lot,” Tueller says of his efforts to restore peace and order to Yemen.

“It's an important issue before the [UN] Security Council. So I coordinate closely with my colleagues from Russia, China, France and the UK, and then in addition countries like Germany, Japan [and] Turkey have had longstanding assistance and development and military assistance relationships with Yemen.”

But the diplomatic effort is incomplete, says Katherine Zimmerman. “Our Yemeni embassy ... is understaffed for the task ahead of it. And so we don't have enough people to meet with Yemenis,” she says. “We should be engaging with all parties and understanding what they want.”

US is fuelling the deadly conflict in Yemen through reckless arms sales to Saudi coalition #TheStoryOfYemen https://t.co/B07UD44OT8 pic.twitter.com/Qb7EpA5n7X

By being headquartered in Saudi Arabia, the US may be signaling its support for one side in a civil war that has divided the country dramatically. "As we're looking at how the United States is moving forward with the conflict, we're moving forward in lockstep with the United Nations political process — and also with Saudi Arabia," Zimmerman says.

And that may distort how the United States engages with the civil war writ large because, she says, "Saudi Arabia is a belligerent."

Zimmerman wants the US to engage more directly with more parties to the conflict, people outside the powerful elites who tend to dominate Yemeni politics. "There are millions of people outside of the capital that have grievances," she says, "and that's why there are such strong opposition bases."

"If we focus on restoring a central government [such as the government of President Hadi] it only goes so far. I think this is to the ambassador's point," Zimmerman adds, "where even if we were to resolve the political issues at stake — that drove the war in the first place — it actually won't end the war, because there are now local grievances in many of the provinces that are being fought at the local level. And there are no processeses in place to start resolving those grievances."

Nearly three years since the war began, the US role in Yemen remains a work in progress for Tueller.

"We're doing this job, even though it's particularly difficult to operate under these circumstances, because we see that the US interests are so important. And that if we're not involved, the conflict almost certainly is one that's going to become worse," he says, "and that ultimately our own interests will become much more compromised in this region if we're not part of a solution that leads to a stable unified Yemen."