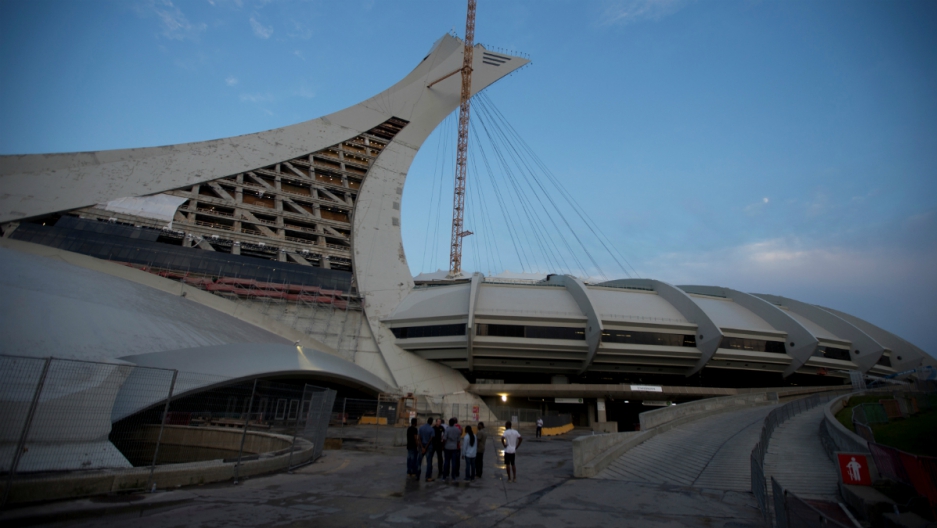 A security guard speaks to a group of men at the Olympic Stadium, which is being used for temporary housing for asylum-seekers in Montreal, Aug. 2, 2017.
Credit:

The stadium has agreed to house about 450 asylum-seekers for a couple of months while the government figures out what to do next.

On Wednesday, the first busloads of people arrived, and now they are sleeping on cots, in a hallway, by the concession stands.

“The ambiance is camplike,” says Mireille Paquet, an immigration policy expert at Concordia University in Montreal, “but for now at least they're safe.”

The vast majority of asylum-seekers are Haitians, who had been living in the US under temporary protection status after the Haitian earthquake in 2010 but are now concerned about their status under President Donald Trump.

The mayor of Montreal, Mayor Denis Coderre, posted on Twitter in French and in Haitian Creole, welcoming these asylum-seekers into his city.

He also pointed out, however, that this situation is a direct result of Trump’s immigration policies.

Many of these Haitian refugees have been crossing the border from the US into Canada secretly by foot.

That’s because there’s a pact, called the Safe Third Country Agreement, between the US and Canada that says that anyone who has already claimed asylum in the US can’t also apply in Canada. The loophole, however, is that if there is no official record of the border crossing, this pact does not apply.

Many immigrants rights activists have been calling for Canada to pull out of this agreement, saying that it encourages people to try to sneak across the border, an often dangerous journey.

“A lot of people involved in immigration services, or working with immigrants, would like Canada to end this agreement,” says immigration expert Mireille Paquet, “but doing so would send a message that the United States is a country that is unsafe and that it is a country that produces refugees.”

It seems like Canada will not be sending that message anytime soon, and for now, these illegal border crossings are likely to continue.

And while housing the refugees in a sports complex is only a temporary solution, it is, Paquet seems to believe, perhaps the best use in years of the 56,000-seat stadium.

“The stadium was built for the Olympics in Montreal [in 1976], and ever since, it’s been the object of contention and criticism,” Paquet explains. “In recent years, it’s been used for events, but it's always been kind of a strange space, which just really doesn't fit well with the rest of the city.”

The stadium's odd architecture — it kind of looks like a spaceship — and its expense — it left the city $1.6 billion in debt — have caused it to be reviled by many.

But Paquet, these days at least, has nothing bad to say about it.

“I'm actually very happy to see the stadium for once being put to something that I feel really proud of,” she says, “which is the welcoming of people that need protection.”