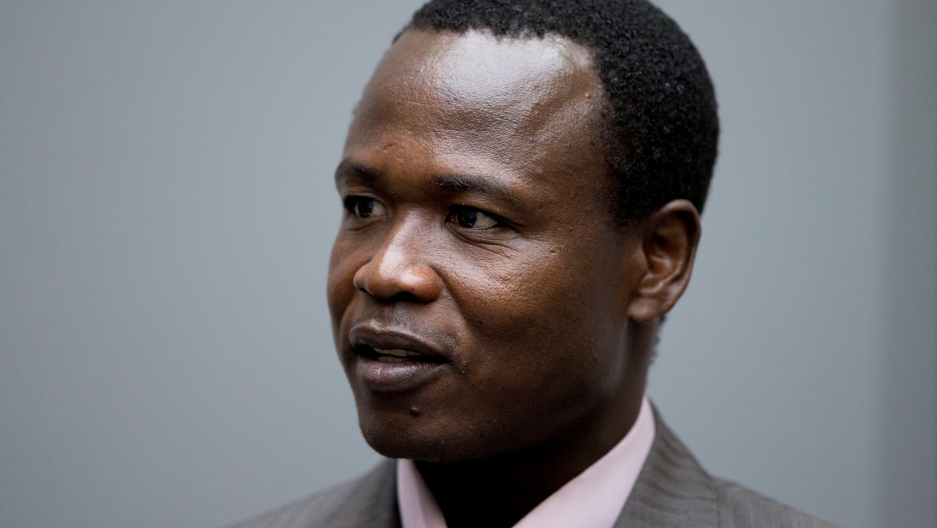 Dominic Ongwen, a senior commander in the Lord's Resistance Army, whose fugitive leader Kony is one of the world's most-wanted war crime suspects, sits in the courtroom of the International Court in The Hague, Netherlands.

No one seems to remember what the boy’s real name was. But his cousin, Lily Atong, remembers him well.

When she talks about him, she gets a distant, wistful look in her eyes.

They grew up together, here in this village in northern Uganda. The boy was chubby, she says with a smile.

He would wake up early in the morning, clean and go tend the garden. He made her delicious, roasted sweet potatoes. And he was funny too — he’d tell stories that made everyone double over in laughter.

There wasn’t much to laugh about back then.

It was the height of the war. An armed Christian militia, known as the Lord’s Resistance Army, fought the Ugandan government for control over the region. And the LRA specifically targeted children: They would storm into a village and snatch up the boys to turn them into soldiers. They’d also take young girls as wives and sex slaves. All in all, about 30,000 kids were taken. 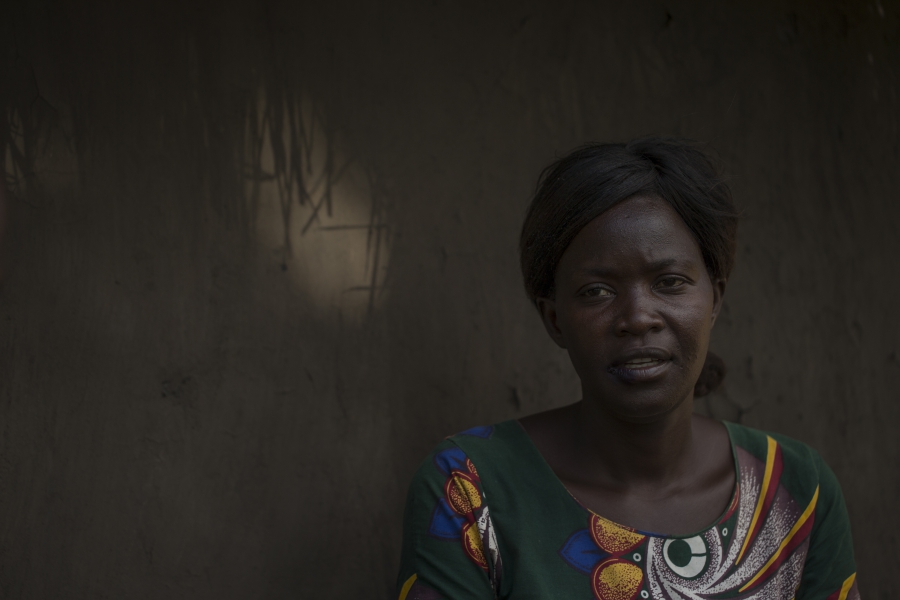 Lily Atong in front of her home in Gulu, Uganda.

When Atong's cousin was 10, he too was abducted and trained to be a soldier. People say he became one of the LRA’s most brutal killers.

In Uganda, the name Dominic Ongwen sends chills down people’s spines. He fought for decades and is alleged to have been brutal. He surrendered two years ago to American special forces.

These days, Ongwen is on trial at the International Criminal Court in the Hague. He faces 70 counts of war crimes and crimes against humanity. He denies the charges.

Ongwen is the first child soldier to ever be tried at the International Criminal Court. His defense has been simple: He was taken as a little boy. He was forced to do those things.

He’s a victim, says Atong. She says anyone else would have done the same in order to survive. Meanwhile, the people who abducted him and put a gun in his hand — they’re walking around town free.

She’s not alone in this view. Ongwen is one of just two LRA fighters facing charges. Even mastermind Joseph Kony, who headed the armed militia, is still at large.

Traveling around Uganda, I find a lot of people who feel sorry for Ongwen. At one point in the city of Gulu, I hop in a taxi, and the driver tells me he feels for Ongwen. You see — the driver himself was abducted as a little boy, and forced to become a child soldier. He says watching Ongwen in that sterile European courtroom, surrounded by judges, is like watching himself on trial.

Not everyone feels compassion, though. The town of Lukodi, in northern Uganda, is green and red — green bush cut by red clay roads. I follow one of those roads uphill to the village schoolhouse. Principal Vincent Oiet sits with me in the yard. He tells me, as a child he was abducted by the Lords Resistance Army five times. He always ran away.

He’s a quirky man, who smiles and laughs often as he talks. It's somewhat jarring, because of what he wants to tell me — how he survived one of the country’s most notorious massacres. The townspeople had been camping right outside an army base, for protection. The LRA raided the camp — Ongwen is accused of leading the operation.

"They came in large numbers," he recalls. "Almost 80. They were making a lot of sound. So we ran, and from a distance we saw smoke coming out of the camp. We spent the night in the bush. In the morning, when we came back, we found a smell. Human beings were burnt. Other people were abducted." 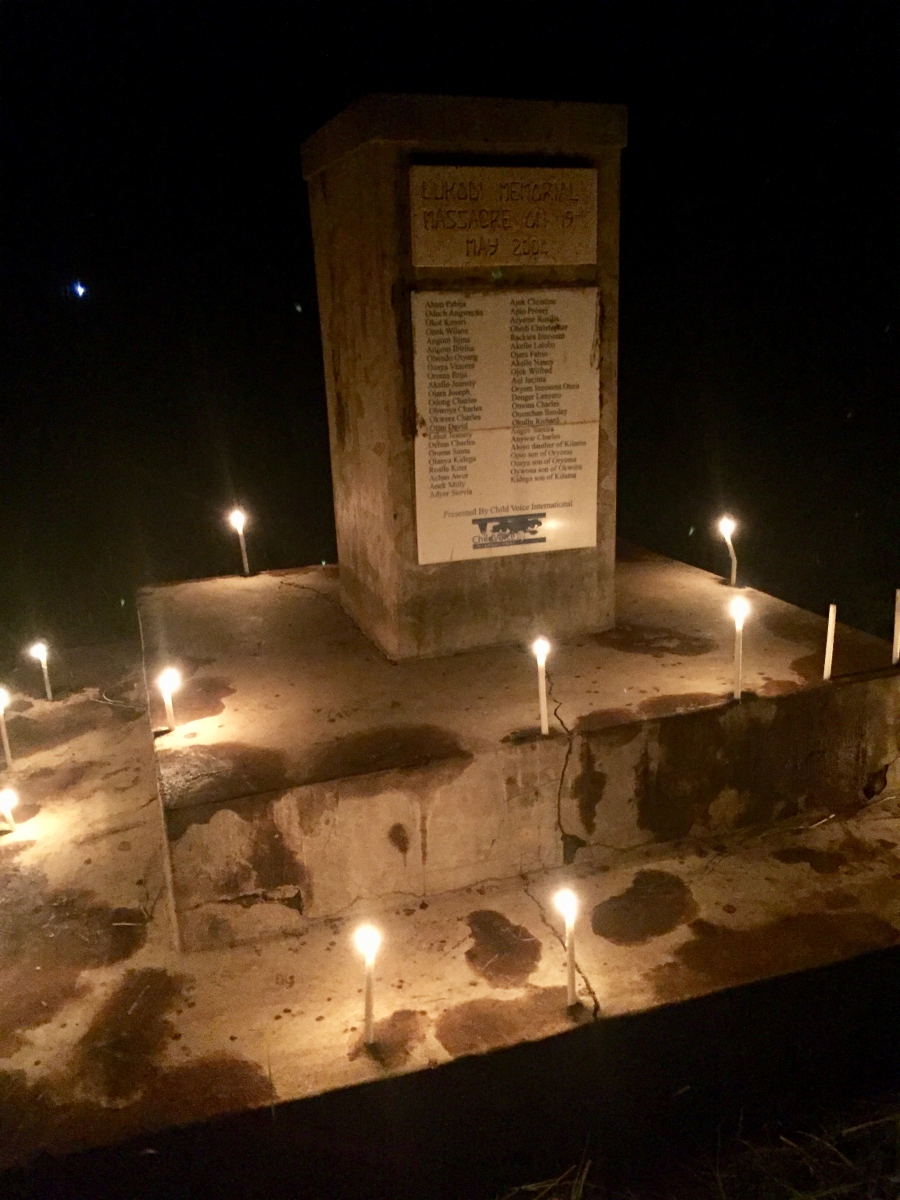 A memorial to honor those killed by the Lord's Resistance Army in Lukodi, Uganda.

More than 60 people were killed in the massacre at Lukodi, including Oiet’s family. Oiet says it’s really frustrating to hear his countrymen say Ongwen should not be held responsible because he was a child soldier. At the end of the day, Ongwen was a man when he killed most of the people in this village.

Every summer night in Uganda, there's a storm. In Lukodi, this night is the 13th anniversary of the massacre and there’s a memorial service. Under an electric black sky, survivors file in through the waist-tall wild grass. They have gathered in front of a monument with the names of the victims of the massacre.

After a war, justice is always complicated. There are victims, and there are perpetrators, but some people end up being both.

So who do you judge? The chubby 10-year-old boy who loved to tend to his garden — the one who got abducted? Or the murderer he is accused of becoming?