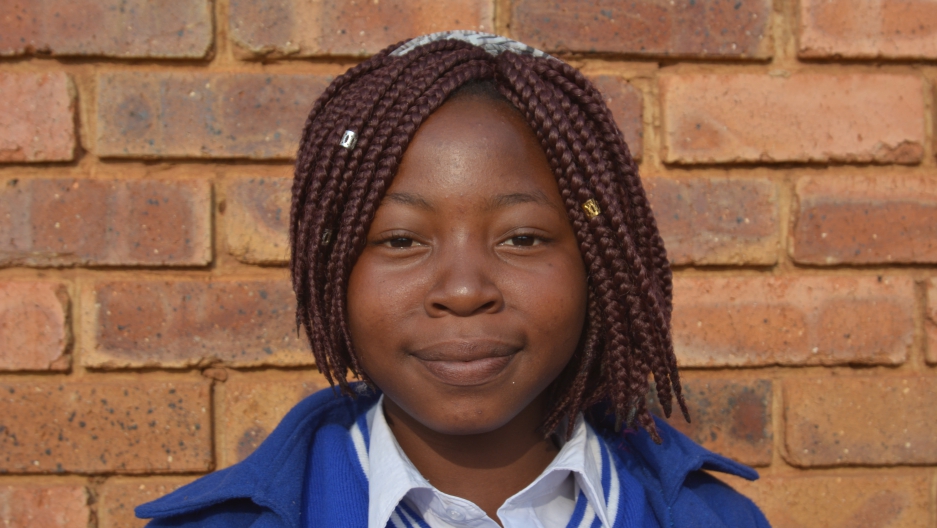 Nhlanhla was just 16 when she became a mom. She was already HIV positive.

The nurse at the clinic stood there explaining. Nhlanhla sat in silence.

What was there for her to say really? Nhlanhla was 16. Pregnant. And she had just tested positive for HIV.

This, she thought — this is how you die.

“I wanted to hold myself and not to cry,” Nhlanhla explains. ”But you know, I didn’t make it. I cried, and then I cried enough.”

She needed to get out of that clinic. In a daze, she picked up her prescription for antiretrovirals — the combination of drugs that suppresses the virus for herself and protects her unborn baby. That night at dinner, she said nothing; she just stared at the food, her eyes welling up. She excused herself.

“The tears were all over my eyes,” she says. “I didn’t know what to do. I just ate a little bit, and then I went to the room and slept. I didn’t even drink the medication.”

Nhlanhla is part of South Africa’s great mystery. How does a girl this smart, outgoing and ambitious, not protect herself from HIV? Especially because this country has the highest number of infected people in the world — more than 7 million. That’s 19 percent of adults. And, there is sex education. Nhlanhla got it in school. There is birth control. Clinics offer it for free.

South Africa even has home kits so you can test yourself for HIV. People know how to prevent this. But young women are getting infected, at a rate twice as high as men.

“We still have a patriarchy in its worst form in Africa ... throughout Africa actually,” says radio talk show host Criselda Kananda Dudumashe.

Dudumashe is also HIV positive. She hosts a show in which she regularly talks about living with the disease. She says it boils down to sexism. You can tell a young girl about the importance of condoms, or abstinence. But that young girl might not feel like she can tell her boyfriend to wear protection or to stop.

“Sometimes you telling a boyfriend that feeds you how to enjoy sex — oftentimes that doesn’t sit well. Either he’s going to beat you up, or you are going to get infected,” Dudumashe says.

So much money has been pumped into the fight against HIV. But Dudumashe says when it comes to girls, we get it all wrong. This isn’t about sex education. This isn’t even about sex. This is about teaching girls that it’s OK to say no to a man. And teaching men to respect that “no.”

Nhlanhla says her boyfriend didn’t respect the no.

The town where Nhlanhla lives, Cullinan, an hour’s drive from Johannesburg, is a mining town. Nhlanhla squints when the wind blows in a fog of dust. From her grandma’s small house, across a lake, you can see a large diamond mine. It’s the only place in the world where they’ve found blue diamonds. There isn’t a lot to do around here, except party with her boyfriend.

“Most of the time we were partying together,” she says. “Coming from pubs, and we were drunk.”

At one point she says she was so depressed and angry, she planned to kill herself and her boyfriend.

She bought halephirimi, which is rat poison. She was going to put it in the food.

She says that’s when it came to her.

“Yes I was angry, but when you find out that you are positive, there is no time for pointing fingers,” Nhlanhla says.

She says she had bigger concerns. “They told me that if I drink my medication correctly, the baby will be born negative.”

Here’s the good news. Worldwide, more than half of all people infected with HIV are on antiretrovirals — the drugs that suppress the virus. Also more than ever before, you can be HIV positive, pregnant, and give birth to a baby that’s HIV negative. If you take your daily medication.

Nhlanhla remembers when the doctors told her that her baby boy had been born negative.

“That name collects every situation that I’ve faced, and everything, and that love I had for him, she says. “I made sure he is born negative. And healthy, for the sake that I love him. ... I made sure everything goes well even when the time was hard.”

Nhlanhla recently turned 18. Her son is 8 months old, and he’s healthy. She gets help from the organization Mothers2Mothers that works with mothers with HIV. She herself feels mostly normal. She’s finishing high school next year, and she has moments when she actually forgets she has the virus. But she talks about it very publicly. Nhlanhla is part of a movement of young people who are coming forward with their positive status.

She was recently on an MTV show about teenage pregnancy in South Africa. Nhlanhla was one of three girls who participated in MTV Shuga Presents: 16 and Pregnant.

The show followed the teens through prenatal check-ups and difficulties within their families. The program was produced by the MTV Staying Alive Foundation and reproductive health care provider, Marie Stopes.

“This was an opportunity to encourage conversation about sexual reproductive health,” explains Georgia Arnold, Executive Director and Founder of the MTV Staying Alive Foundation. “So from everything from contraception, to teen pregnancy — most importantly it signposts our audience as to where to go if they need more information.”

It was the first time some friends and members of Nhlanhla’s family found out about her status. Her ex-boyfriend, who is mentioned in the show but not seen, has not been forthcoming about his HIV status. Nhlanhla says he hasn’t told his family — or the women he dates.

But Nhlanhla told the world her secret. And it was OK.