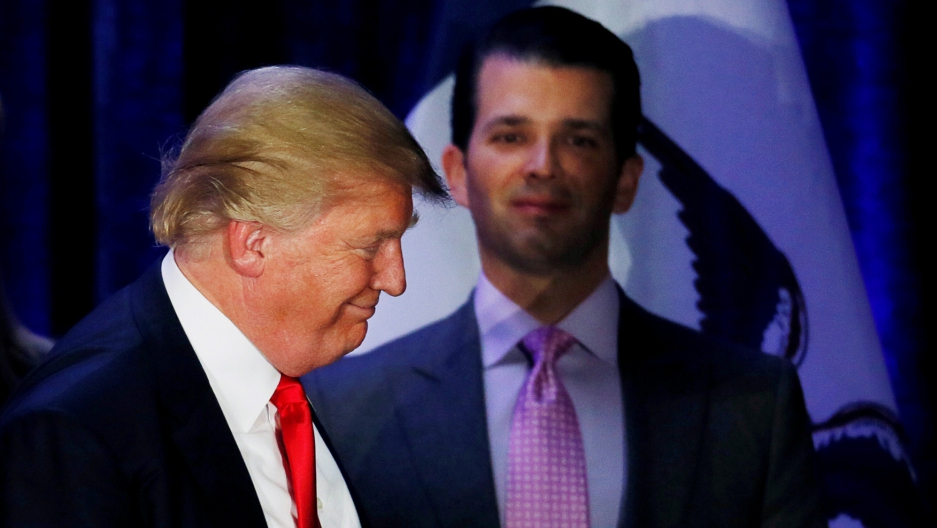 Donald Trump Jr. (R) watches his father Donald Trump leave the stage on the night of the Iowa Caucus.

The misleading statement in which Donald Trump Jr. said a meeting with a Russian lawyer during the 2016 election was focused on adoptions was personally dictated by President Donald Trump.

It later emerged that during that fateful June 2016 meeting, Trump's eldest son, his son-in-law Jared Kushner and then campaign manager Paul Manafort met with a Russian government attorney who an intermediary claimed had incriminating information about Trump's election rival Hillary Clinton.

The subject line of the email from Trump Jr. inviting Kushner and Manafort to the meeting read "Russia — Clinton — private and confidential."

In his initial statement on the meeting, Trump Jr. said the group "primarily discussed a program about the adoption of Russian children," and insisted that "it was not a campaign issue at the time and there was no followup."

The Washington Post reports that the president dictated the statement to his son while on a flight home from the G20 summit in Germany.

Trump Jr. later sent shockwaves through Washington by releasing a series of emails that detailed how he had attended the meeting after being promised "very high level and sensitive information" that was "part of Russia and its government's support for Mr. Trump."

Trump has rushed to his son's defense, and lambasted what he calls a political "witch hunt."

In defending his son, Trump said: "I think from a practical standpoint most people would have taken that meeting ... Politics is not the nicest business in the world, but it's very standard."

Citing people familiar with the discussions, the Post said the president's legal team planned to present the meeting as a potential setup by Democrats seeking to entrap Trump Jr. and thus Trump himself, who at the time was the presumptive Republican presidential nominee.

The meeting with lawyer Natalia Veselnitskaya has thrust Trump Jr. into the center of a growing scandal over whether Trump's associates colluded with Moscow to tilt the 2016 election in the Republican's favor.

Former FBI director, Robert Mueller, is probing, in his capacity as special counsel, the Russia connection independently of the Senate panels.

The Post said advisers worry that the extent of Trump's direct involvement in his son's response could put the president — already under fire for other efforts to undermine the Russia probe — and key advisers in legal jeopardy.

"This was ... unnecessary," one presidential adviser told the Post on condition of anonymity.

"Now someone can claim he's the one who attempted to mislead. Somebody can argue the president is saying he doesn't want you to say the whole truth."

Suggesting Trump is increasingly acting as his own lawyer, strategist and publicist, the adviser added: "He refuses to sit still.

"He doesn't think he's in any legal jeopardy, so he really views this as a political problem he is going to solve by himself."

One of Trump's attorneys, Jay Sekulow, said in response to the report: "Apart from being of no consequence, the characterizations are misinformed, inaccurate and not pertinent."