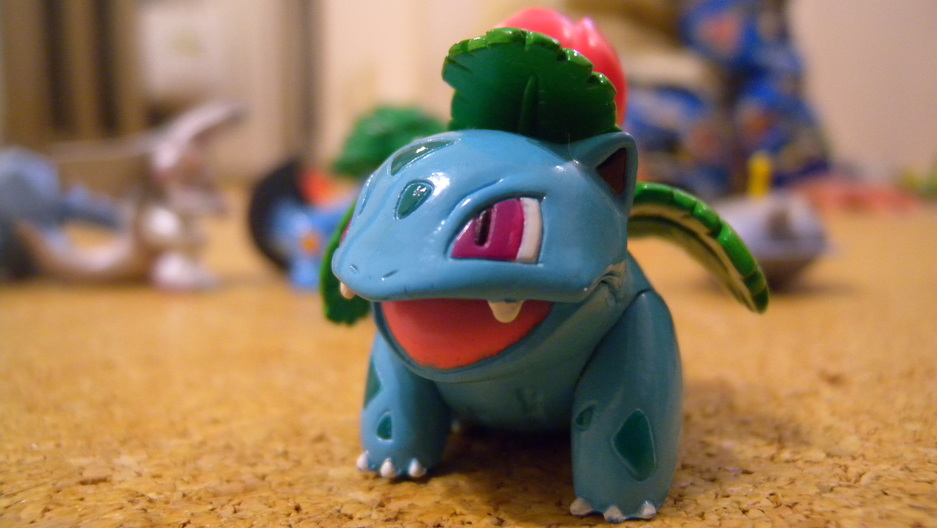 Meet Ivysaur, an evolved form of Bulbasaur. It’s not clear whether, in this fifth-grade class, Ivysaur would be able to immigrate to Pokémonlandia.

The challenge: Bring immigration law to life for a room of fidgety fifth-graders.

Specifically, I need to bring it to life for fifth-graders who have already heard from a dozen other parents on Career Day in May — including an actual rocket scientist. I am an immigration lawyer and professor. The room is warm, and the kids sit at their desks, sets of four scattered around the room. The looks on their faces are tired and skeptical. My daughter at her desk is alternately hopeful and nervous that I will embarrass her.

My plan? Talk about Pokémon.

I write Pokémonlandia on the board and announce that we are going to create the rules for who could come live in that imaginary place. What kinds of people do we want?

The boy with glasses who had been bouncing in his seat calls out “Pokémon trainers!” After a couple more Pokémon-related suggestions, a quiet girl whose head had been in a book when I walked into the class raises her hand and suggests “kind people.”

I ask the class if they want people who could play sports or who liked pizza. They agree with the pizza idea and specify that we should have soccer and basketball players. I ask if we should let people in who liked “Hamilton.” Half the class gets worked into a frenzy in favor of this idea. The other half shares defeated looks, clearly not part of the craze.

So far so good.

Then I ask, “Ok, how are we going to prove that anyone is kind? Or can play basketball? Is your word good enough, or should there be some other way to show it?”

I asked the girl who suggested kindness what she would do. She thinks it would be good to ask about the last kind thing a person did. And her classmate adds, “I could let them know about the time you moved a bug off the sidewalk so it wouldn’t get stepped on!”

Interviews. Witnesses. Evidence. The kids are figuring it out.

One kid figures it out too well. To show what a Pokémon fan he is, he excitedly reaches under his desk and pulls out a thick stack of cards. Which his teacher promptly confiscates.

His evidence, it turns out, was not legal in the classroom.

Finally, I say, “Ok, for the ‘Hamilton’ people, I think we need a test. Finish the lyric for me: ‘Everyone give it up for America’s …’” Fifteen fifth-graders shout: “… favorite fighting Frenchman, Lafayette!” They pass the test.

So, we have rules, we have the idea of proof. Now we need to get into the weeds.

Let me take us out of the classroom for a moment, to provide some context.

Immigration law is notoriously labyrinthine. And that’s an underestimation. Some people, with the right relationships or work credentials might have straightforward paths. But even for them, the process is fraught with anxiety because it is so easy to make a mistake, whether on the forms or in life. And for many people, the path is anything but straightforward.

My daughter’s classroom is in a diverse suburban Maryland community just outside Washington, DC, where kids are as likely to be the children of lawyers and doctors as they are the children of shop owners and landscapers. Many of the kids have been through the immigration system themselves. One girl had arrived only a few months earlier; she joined the fifth grade class from Ethiopia in February. Many more were children of refugees or asylees, or their parents immigrated for work or family relationships. Some, I am guessing, have no status at all — or at least not yet, since “status” is so often a long and complicated work-in-progress. If they came as refugees, they almost certainly waited years before being admitted. Winning asylum here also takes years, because both the asylum office and the immigration courts are so backlogged.

I do not want to get into all this with these kids. It is depressing at best, especially for those closest to the process. But I do want to be clear that being eligible for immigration is not the same thing as being able to immigrate.

At this point, the geography of the classroom becomes my inspiration.

I ask all the students who said they wanted soccer players in Pokémonlandia to raise their hands. At every table cluster, at least two kids’ hands shoot up — at a couple, all four kids excitedly wave their arms.

I break the news to them that their table clusters are each one country. The rule is that only one person per country can migrate to Pokémonlandia each year. This means that at the tables where four kids raised their hands, one of them would wait four years. I randomly gave them their order.

The girl who has to wait four years immediately slumps over her desk. Future actress or future immigration lawyer — hard to say.

This is a simplified version of why and how immigration backlogs start. For each category — say, adult married children of US citizens, or adult unmarried children of green-card holders — there are numerical limits (roughly 23,000 and 26,000 visas respectively). After that, only 7 percent of visas can go to any particular country. If only 100 people want to come from Central African Republic and 50,000 want to come from India, all of the qualifying Central Africans will get visas, but some of the eligible Indians will have to wait another year, or two or 10 — or in the most notorious case, 24 years for some family members from the Philippines.

Back to my oversubscribed table cluster and slumping student. I ask her if she would like help to come sooner. She nods eagerly.

I go over to her desk and look around. “You know, you’re in luck. There is a very special rule that allows people with pink sneakers and yellow shoelaces to immigrate without waiting.”

The other kids immediately check their shoes to see if they qualify. They do not. The pink-shoe girl is quite pleased with herself, but the rest of the room grumbles. As in real life, not everyone can afford the high-quality legal representation the pink-shoe girl got. But good lawyers can often find unexpected paths for people who think they have no options.

I end their collective misery at that point, but I take their rapid-fire questions. How young are your clients? (One of my clients was 9 months old when I took her deportation case, which impresses and shocks them.) Do you lose cases? (Not often, but when we do it hurts. And when we win, it feels wonderful.)

One student asks for my business card, which I take as my cue to end the lesson.

Fifth-graders are so curious about the world and they have finely-tuned instincts for what is fair and unfair. That makes it interesting and challenging to talk about immigration with the class. I try to present good faith arguments for all sides of the many debates about immigration, and yet, when the law is what it is, and the system is as creaky and slow as it is, sticking to basic facts is usually still shocking.

We detain children? Yes. It takes seven years for your unmarried adult children of US citizens to be able to migrate to the US? Yes, unless you’re from Mexico, and then it’s 21 years. There are five judges in Baltimore to hear 22,000 Maryland immigration cases? Yes.

I did not get into all of this with these kids that day. For me, it was enough to introduce in a palpable way that it is a complicated system to navigate, hoping that if they hear simplistic slogans like “Which part of illegal don’t you understand?” they will remember that it’s harder than that.

And if one of these kids becomes a politician and passes a law in a couple of decades banning “Hamilton” fans or creating pink-sneaker exceptions, I sincerely apologize.

Elizabeth Keyes is an associate professor and director of the Immigrant Rights Clinic at University of Baltimore School of Law. Her daughter will start sixth grade in the fall and aspires to be a novel-writing manager of an animal sanctuary. Or something.