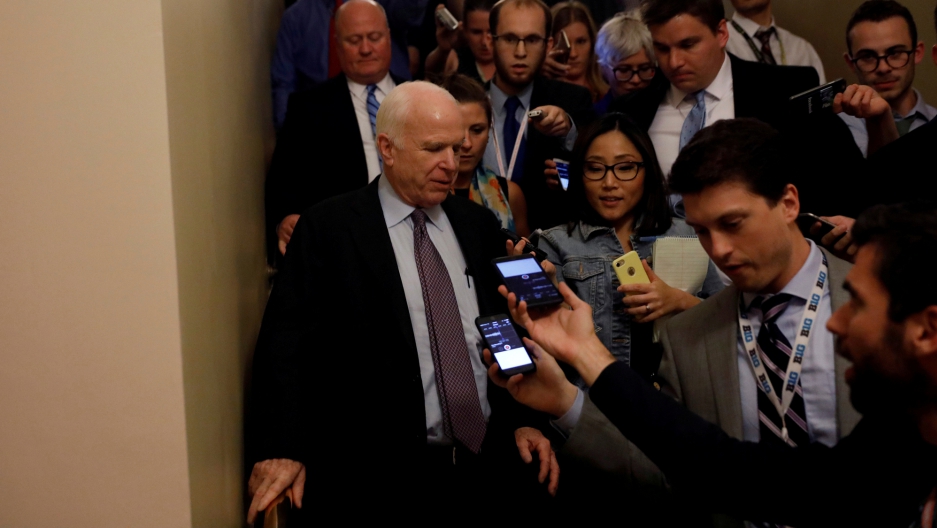 In the early hours of Friday morning, US Republicans failed in their latest effort to repeal Obamacare. The vote came down to the wire, with the decisive moment resting with Senator John McCain, recently diagnosed with brian cancer, who sided with two moderate Republicans and all Democrats in opposing the legislation.

"This was a disappointment, a disappointment indeed," Senate Majority Leader Mitch McConnell told colleagues after one of the most tense votes in years on the Senate floor.

"I regret that our efforts were simply not enough this time."

The collapse marks a major setback for Republican leadership and for President Donald Trump, who had campaigned relentlessly on a pledge to repeal and replace Obamacare, officially called the Affordable Care Act, that passed into law under his predecessor Barack Obama in 2010.

Friday's vote, which capped a series of failed efforts in recent months to get an Obamacare repeal measure over the line, was on a so-called "skinny repeal" bill that would have rolled back only parts of Obamacare but kept the bulk of the law intact.

It crashed to defeat, 49-51, leaving Trump's singular legislative initiative, and Republicans' seven-year pledge to rip out the health care law, in tatters.

Trump, who had long cajoled and strong-armed Republicans in a bid to get them into line, swiftly spoke out about the failure, apparently unmoved by Democratic pleas for the parties to work together and improve the existing law.

"3 Republicans and 48 Democrats let the American people down," Trump tweeted. "As I said from the beginning, let ObamaCare implode, then deal."

3 Republicans and 48 Democrats let the American people down. As I said from the beginning, let ObamaCare implode, then deal. Watch!

Senate leadership had never intended "skinny repeal" to become law; they saw it as merely a vehicle for joining forces with House Republicans to craft a broader repeal-and-replace plan.

But some Republicans including McCain blasted the bill as terrible policy, and grew nervous that the House of Representatives might turn around and pass the bill instead of going to conference with the Senate.

The non-partisan Congressional Budget Office analyzed the bill, and concluded that insurance premiums would spike by 20 percent per year and 16 million people would lose insurance if it became law.

House Speaker Paul Ryan later said his side was willing to negotiate with the Senate, but that failed to placate McCain.

Vice President Mike Pence was brought to the chamber around midnight, in case he would be needed to break a 50-50 tie.

But he never got the opportunity, as McCain, whose war hero status was mocked by Trump in 2015, refused to cave to pressure to get on board, despite extraordinary scenes on the Senate floor where a grim-faced Pence huddled with McCain for several minutes.

"We must now return to the correct way of legislating and send the bill back to committee, hold hearings, receive input from both sides of aisle, heed the recommendations of nation’s governors, and produce a bill that finally delivers affordable health care for the American people," McCain said in a statement.

While several Democrats clapped when McCain cast his "no" vote, the mood remained somber in the chamber after the defeat.

"We are not celebrating; we are relieved that millions and millions of people" would still be able to retain their health care, said top Democrat Chuck Schumer.

But he acknowledged Obamacare needed repair. "Let's turn the page and work together to improve our health care system," he added.

Some Republicans refused to concede that the effort was dead.

"It's not over 'til it's over," first-term Senator John Kennedy told reporters, adding that he still hoped Congress would be able to rip out Obamacare "by the roots" and start over.

But getting there will be far more time consuming, and most likely far less partisan.

The most recent effort was conducted under a special process that required just a simple majority to advance. Any new plan would likely require a 60-vote majority to move forward, making Democratic support a necessity.

Lisa Murkowski, one of the three Republicans who voted against the measure, said the Obamacare status quo was still unacceptable and unsustainable.

"We have to regroup. We have to come together" and work in a committee process to craft improvements to the law, she told NBC.

The secretive strategy employed by McConnell is sure to come under scrutiny.

He crafted the bill in secrecy, and Republicans and Democrats alike complained they had not even seen the measure until it was introduced on the Senate floor.