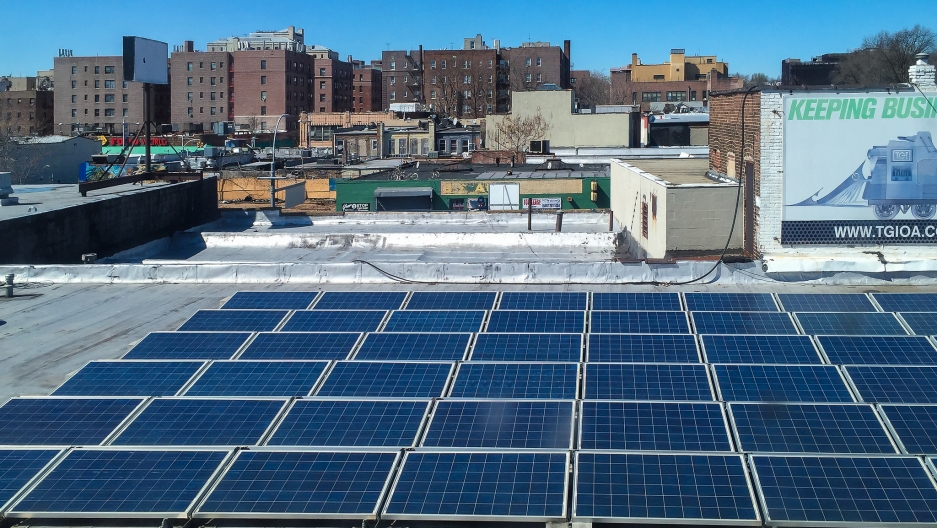 The green trend these days is to go local — and if urbanites can source everything from veggies to craft beer in their neighborhoods, why not solar energy?

LO3 Energy, a New York-based startup, is working on one way to do so. Its project, Brooklyn Microgrid, aims to help electricity users buy energy from their energy-producing neighbors, using smart meters and an app.

“Brooklyn Microgrid is the idea that we can now allow peer-to-peer transactions of energy and energy attributes across the grid,” says Scott Kessler, director of business development at LO3 Energy. “So, if you’re producing via solar panels, via wind, whatever energy-generation resource you might have, you can now actually transact with your neighbor,” keeping the energy’s environmental and economic impact in the community.

Kessler says about 60 microgrid meters have already been installed at energy-producing buildings across Brooklyn, and around 350 people have signed up to participate. The project doesn’t involve rewiring the physical grid, he explains; it just tweaks how electricity is bought and sold. “So, it's really just a new form of settlements among people,” he says.

The new project relies on blockchain — the same secure digital ledger used in cryptocurrencies like bitcoin. In its pilot phase, neighbors traded test versions of renewable-energy credits, according to The New York Times. Now, Kessler says, the team is working with regulators to define how electricity can legally be traded through the microgrid in the future.

“We're not a utility, we're not a generator, and we're not really an energy retailer,” Kessler says. “So, how do we fit in, and how can we start to trade energy legally while still providing all the protections that folks on the electric grid are accustomed to?”

According to Kessler, the microgrid should be up and running “in a few months.” A video previewing the Brooklyn Microgrid app — which will also let users suggest sites for new solar panels — explains how consumers will set the price they’re willing to pay for different types of energy, including community-produced solar. There’s also mention of “negawatts.” For example, when everyone’s cranking up their air-conditioning on hot summer days, you could be paid to turn your water heater and other energy drains off.

“So, not only can you start to buy and sell energy, all of a sudden I can actually sell the ability to turn on or off my devices,” Kessler says. “And you start to get this idea of grid control through people's transactions.” The grid, he explains, “just wants to be balanced at the end of the day.”

Once the microgrid is live, Kessler says the company plans to expand the technology to demonstration projects in other communities, and around the world. And, in Brooklyn, experimenting with battery technology could potentially keep the microgrid up and running during larger grid outages — no small offer for an area that experienced major power outages during Hurricane Sandy in 2012.

“We actually just announced a partnership with Siemens where we're looking at incorporating our technology with existing grid infrastructure, like their transformers and their substations, and also looking at physical microgrids where this has some really interesting applications, as well,” Kessler says.