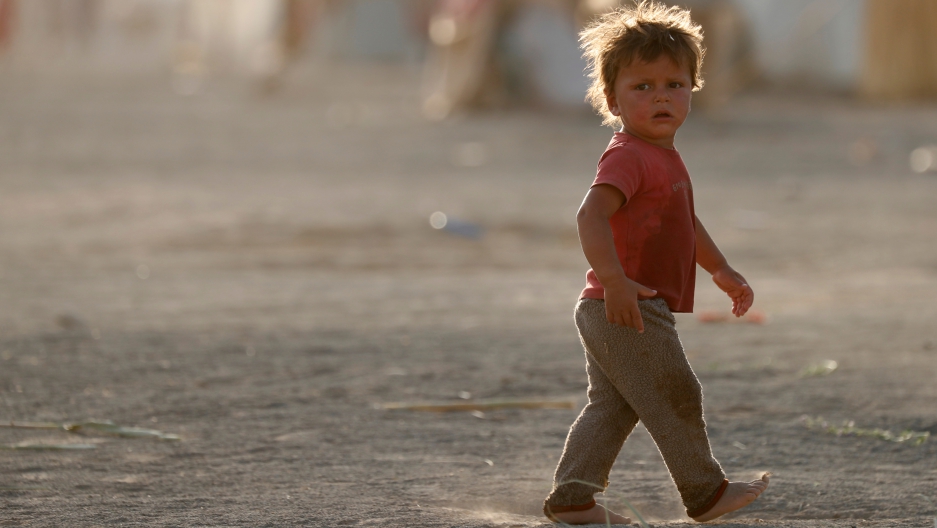 A boy, displaced from fighting in the ISIS stronghold of Raqqa, Syria, walks in the desert near the village of Karama, east of Raqqa, July 1, 2017.

The military defeats suffered by ISIS over the past few months, in Syria and Iraq, are leading to some unexpected problems. ISIS supporters, women and children, are being displaced and sometimes captured.

It's an uncomfortable reality, but ISIS supporters are people too. That raises issues about what happens to them now.

Borzou Daragahi of BuzzFeed News went and met some of the women and children, currently being held in detention in a makeshift camp in northern Syria. They were detained by US-backed Kurdish fighters during operations around Raqqa, the capital of the self-proclaimed caliphate. His story for BuzzFeed is here.

Some of the women are Syrian. Many are from overseas. Daragahi met some from Tunisia, Germany and Indonesia, to mention a few. Some joined ISIS for the cause, some just followed their husbands and lovers. Few seemed to be completely honest about their stories.

The camp is hardly comfortable, but the women are fed, and Daragahi says there is no evidence that they are being abused.

The children are different. The older ones, says Daragahi, want to know when their families can be together again. The younger ones are largely oblivious.

These women are not suspected of involvement in war crimes, but they had little to say about the atrocities committed by ISIS, perhaps by their own husbands. Most denied the atrocities, or played them down, or argued moral equivalence in how their people have been treated by others.

Daragahi says most regret their fate. One said: "We were looking for paradise but all we got was hell."

But he says none expressed repentance or regret for what ISIS had done. “I did not hear any,” says Daragahi. “I heard repentance and regret about coming to Syria and joining ISIS. But I did not hear anything. And I provided a lot of opportunities, in interviewing these women over a few hours, for them to express any kind of remorse or sympathy for ISIS’s many, many victims.”

The women might still face legal consequences, even if not directly involved in crimes against humanity. “There's going to be real issues for them to face,” says Daragahi, “because the crime of joining ISIS is something they're going to have to face up to. There's a social stigma there and there's also, I think, some legal repercussions. So most of these women will probably do some time.”

Daragahi says one woman told him she was “ready to go and serve time in prison, to pay her debt to society for anything she might have done.”

‘Giving them other opportunities’

But the region faces a big issue about what happens after jail time. There are potentially thousands of women like this, and there is no clear, regionwide, policy as regards rehabilitation. But there are studies.

“There's a whole new field in Europe and in the US to some extent,” says Daragahi. “It goes under the rubric of ‘countering violent extremism’ or CVE. It’s a combination of social work and criminal justice and so on — aimed at not necessarily convincing these people that this was the wrong path, but trying to reintegrate them positively into society. I actually went to the Netherlands some time ago where they have a very, very advanced and sophisticated kind of program for this kind of stuff.”

“They have people who are perhaps Muslims themselves,” he explains, “who perhaps at some point in their life had a toe or a foot in the more radical parts of Islam, and are now working with the government, working with various agencies, trying to convince youth to lead a more peaceful and more moderate path. Not necessarily by using scripture, because they find that that doesn't work. But by giving them other opportunities, giving them other channels for them to invest their energy in.”

“But in a way,” he says, “you're putting the cart ahead of the horse, in the case of these women, who are still stuck in this legal and social nether world, in these makeshift prisons, in a makeshift refugee camp, in a makeshift political entity, in northern Syria.”

ISIS is definitely losing territory and they are trying to adapt. But it's hard to tell how well they’re doing, says Daragahi. “You know, it seems like the number of foreign attacks has also gone down.”

“I have a feeling that ISIS's stock is declining quickly,” he adds. “It's been somewhat discredited. I think that the global effort to stigmatize and discredit this organization is kind of bearing fruit and that it's going to fade in the same and maybe similar way that al-Qaeda has faded as a threat.

“But I think that, sadly, none of the issues that in part gave rise to these extremist jihadi groups has been resolved. To wit, the kind of sense of grievance among Sunnis in the Middle East and beyond; the sense of hurt and injustice that created the fertile ground for ISIS to take hold in Syria and Iraq. More likely than not, you're going to get an al-Qaeda 2.0 or ISIS 2.0 emerging from the rubble of the region.”