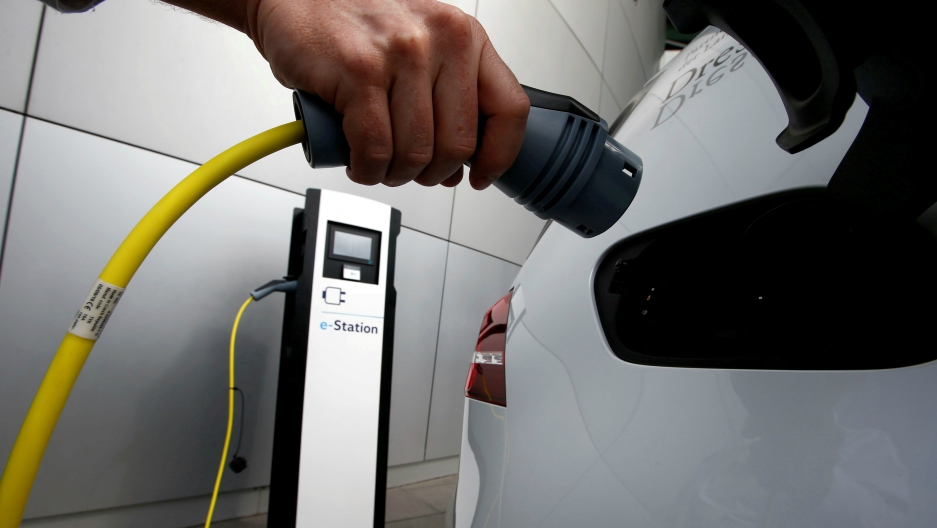 An electric car being charged outside the new production line of the Transparent Factory of German carmaker Volkswagen in Dresden, Germany, March 30, 2017.

Britain said Wednesday it will outlaw the sale of new diesel and gasoline cars and vans from 2040 in a bid to cut air pollution but environmental groups said the proposals did not go far enough.

Environment minister Michael Gove announced the move as part of the government's keenly-awaited $3.9 billion air pollution plan, which will demand that councils propose measures by March next year to reduce nitrogen dioxide (NO2) levels.

The ban on gasoline and diesel cars as well as vans follows a similar proposal by the French government, and will also include hybrid vehicles that have an electric motor and a gasoline or diesel engine.

Britain's High Court demanded that the government produce plans to tackle illegal NO2 pollution, largely caused by diesel emissions, and a draft report was published in May, but the full report was delayed by last month's snap general election.

The government will provide local councils with more than $330 million to bring NO2 levels to legal levels, with possible solutions including the removal of speed humps, reprogramming traffic lights and changing road layouts.

Campaigners want cities to impose entry fees on diesel drivers, but councils will only be allowed to do so if no other measures are available, with ministers wary of "punishing" drivers of cars who bought their vehicles in good faith, according to media reports.

"Diesel drivers are not to blame and, to help them switch to cleaner vehicles, the government will consult on a targeted scrappage scheme, one of a number of measures to support motorists affected by local plans," a government spokesman said.

Gove added that he did not believe "that it is necessary to bring in charging."

"While this plan makes the right headline-grabbing noises, in reality it means that children across the UK will continue to be exposed to harmful air pollution for years to come, with potentially irreversible impacts," said Areeba Hamid, clean air campaigner at Greenpeace UK.

The Society of Motor Manufacturers and Traders (SMMT) said that the move could cost jobs.

"Outright bans risk undermining the current market for new cars and our sector which supports over 800,000 jobs across the UK, we could undermine the UK's successful automotive sector if we don't allow enough time for the industry to adjust."

Air pollution contributes to the death of more than 40,000 people per year in Britain, according to official figures, with nitrogen dioxide a particular problem.

Norway, which is aiming to end the use of all cars running on fossil fuels by 2025, offers generous tax breaks for electric vehicles as well as free parking and the use of bus lanes.