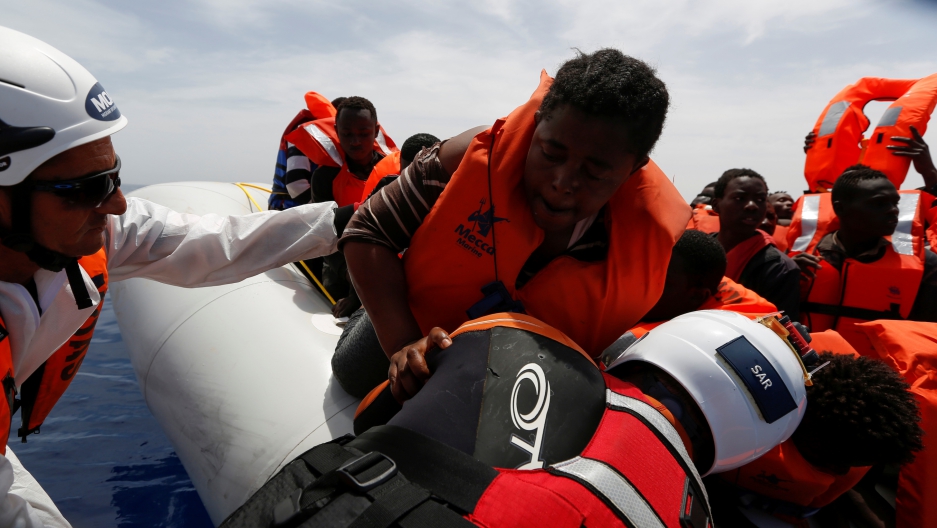 The group Defend Europe wants to put a stop to the work of organizations like this one, Migrant Offshore Aid Station, seen rescuing migrants from a rubber dinghy in the central Mediterranean near Libya, on May 4.

For the past few years, humanitarian workers have been carrying out rescues of migrants trying to cross the Mediterranean Sea to Europe — but a new group wants to put a stop to it.

A dozen mostly 20-somethings from Europe are trying to head out to sea to investigate and possibly disrupt the rescue operations, aiming to prevent more migrants from reaching Europe’s shores.

What is Defend Europe?

Defend Europe is a group of young people who belong to the Identitarian Movement, a network of far-right activists with branches in France, Germany, Italy, Austria, the Netherlands and other European countries, as well as support from groups in North America and elsewhere. They say they want to protect Europe’s identity by stopping immigration, which reached record numbers in recent years.

A variety of right-wing figureheads, such as Austrian Martin Sellner and Italian Lorenzo Fiato, are among Defend Europe’s activists. YouTube commentators like Brittany Pettibone from the United States and Lauren Southern from Canada support the group as well. The members are reportedly in their 20s and early 30s.

They believe that nongovernmental organizations’ search and rescue missions in the Mediterranean act as a “pull factor,” encouraging migrants to take to the sea because they know they will be rescued and carried to Europe.

“The problem are those NGOs,” a representative says in a promotional video on YouTube (below). “They are working as water taxis, ferrying migrants from the Libyan shore to Italy, basically cooperating with human traffickers.”

What do they plan to do?

The identitarians raised more than $150,000 to charter a 130-foot ship called the C-Star, which they plan to use to monitor the rescue missions in the Mediterranean.

They say they want to end “human trafficking” and, most importantly, stop people from coming to Europe.

The crew plans to head out to an area of international waters off Libya's coast known to be a search and rescue zone, where humanitarian groups are operating.

There is some confusion, however, about their plans once they get there.

Defend Europe has not yet agreed to an interview with PRI.

But in comments to BuzzFeed News, one member said they expected to try to block the humanitarian ships, while another said they will investigate the operations and possibly pick up migrants and hand them over to authorities in Libya or Tunisia.

According to a fundraising webpage, the group says: “Our goal is to document the doings of the NGOs, expose their collaboration with the human smugglers, and intervene if they do something illegal.”

That echoes theories expressed by a number of far-right officials. An Italian prosecutor opened an investigation into claims of collusion between NGOs and smugglers in May. He said it was just a “hypothesis” and that he had no proof of any wrongdoing.

NGOs operating rescue missions in the Mediterranean include Doctors Without Borders, Save the Children and other organizations from Spain, Germany and elsewhere. They say their ships coordinate with the Italian government's Maritime Coordination Center and deny the allegations of wrongdoing.

How is the mission going so far?

Some of the group’s activists have been waiting in Italy for their ship to arrive, but on Wednesday the C-Star’s captain and some its crew were reportedly detained in Cyprus for forging false documents.

The British newspaper The Telegraph reported that the crew are having some issues with their immigration status, and that five of them were applying for asylum.

In a statement posted on Twitter, Defend Europe said:

"We were reported that at the airport, as the apprentices were about to return to their country of origin, NGOs offered them to stay in Europe and apply for asylum, in exchange for promises and money.”

"Fifteen apprentices refused, five accepted this act of bribery and are now making false accusations against the owner of the ship."

Why don’t NGOs take migrants back to Libya?

Libya is now the main departure point for many migrants fleeing sub-Saharan African countries for better and safer lives in Europe.

The Libyan coast guard has taken more than 6,000 migrants attempting sea crossings back to Libya this year. But the nongovernmental groups take the migrants to Italy, whose islands and Mediterranean coast are a few hundred miles from the rescue zone. The organizations say the situation in Libya for migrants is too dangerous, and the United Nations migration agency has backed that up.

Over the past few years, Libya has become a “torture archipelago,” according to the UN’s International Organization for Migration. It is a place where migrants trying to reach Europe face the real prospect of being sold into slave markets, abuse, rape and detention.

The UN has described the migrant detention centers as “inhumane and shocking,” and urged for them to be shut down.

The EU is sending millions of dollars to improve these sites and to properly train the Libyan coast guard. But in the meantime, migrants who are sent back to Libya face the very real prospect of torture and arbitrary detention.

This is why NGOs have argued against rescues being carried out by the Libyan coast guard.

What are the rescue ships doing to prepare for Defend Europe’s potential interference?

Earlier this week, Defend Europe activists were waiting for their ship to arrive in Catania, on the east coast of Sicily. In the same port is the Vos Hestia, a rescue ship run by Save the Children.

The identitarians even tweeted out an ominous message about it.

The Vos Hestia, ship of "save the children" is now in Catania. The days of their unwatched doings are over. #defendeurope pic.twitter.com/aWQUSbafhG

Rik Goverde, who is with the Save the Children team in Catania, said they aren’t entirely clear what Defend Europe’s aims are.

“We don’t mind them being there, but interfering in the rescue would be a violation of maritime law,” he said.

“We are not to decide if [migrants] are welcome in Europe. The only thing we do is try to save lives at sea,” he said. Save the Children’s Mediterranean rescue operation “is not a long-term solution of course. The solution lies on land — in the countries of origin and Europe. I hope [Defend Europe] would understand that.”