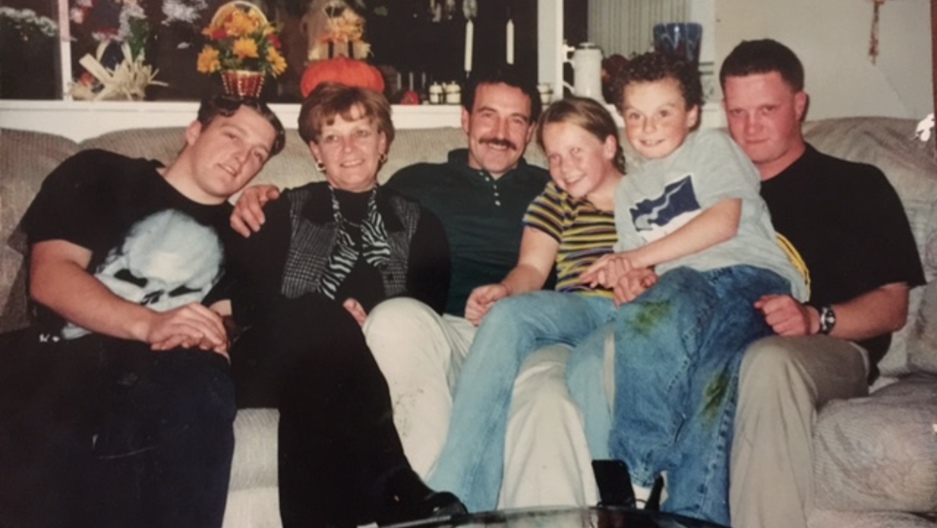 The McAllister family arrived in the US from Ireland in 1996. Malachy McAllister was denied asylum but his deportation has been deferred as legislation about his case has been pending in Congress. Photographed in Long Island, New York. From left to right: Jamie, Bernadette, Malachy, Nicola, Sean and Gary McAllister.

Over the years, as judges and immigration officials have analyzed Malachy McAllister’s life to determine whether he should be allowed to stay in the US, they’ve focused on two events that happened 30 years ago in Northern Ireland: In one, McAllister acted as a look-out during an attack on a policeman; in the other, McAllister’s family was ambushed in their home.

Depending on how the government weighs these events, McAllister is either an Irish terrorist or a persecuted asylum seeker.

McAllister is wary of talking to the press. Articles over the years have described McAllister as a refugee and a terrorist, an Irish revolutionary and a New Jersey dad. None of them, he feels, explain his story properly.

In May, we sat in his Ford F-150 outside a bar he owns in Midtown Manhattan. McAllister has bright blue eyes and an Irish accent unchanged by 20 years in New York and New Jersey. He’s amiable and quick to make a joke, but he’s also grown frustrated with telling this story. No matter how he tells it, he says, judges, reporters and legislators only seem to hear “Irish terrorist.”

“We have been allowed to stay here, but it has been difficult. It’s been year in, year out. We’ve had close calls. I have lost my wife,” McAllister says. “I have worked hard in this country. Even to simply maintain — for want of a better word — sanity.”

To stay in the US, McAllister has had to appeal to members of Congress to write letters and pen legislation on his behalf. There have been eight pieces of legislation introduced in Congress seeking to regularize his status. Like similar legislation for other individuals, none have passed, but they have given McAllister and his family temporary relief as they were considered.

In May, the head of Immigration and Customs Enforcement decided to crack down on this legislative reprieve. Now, McAllister and his supporters’ only option is to convince the head of the Department of Homeland Security, now temporarily led by Elaine Duke, that McAllister is not a threat to the country and deserves to stay in the US.

McAllister grew up in Belfast in the 1970s and 80s, during the Troubles, the period of civil war in Northern Ireland that pitted a Catholic minority, who wanted independence from Britain, against a Protestant majority that was backed by the UK. McAllister was part of the Catholic minority, and he remembers being harassed daily, being stopped and searched by the police. Sometimes, McAllister says, officers would threaten him and others by pressing guns to their temples.

He says police officers once picked up his wife Bernadette and then shoved her out of a moving armored car — one of the the Saracen vehicles that became well known in Northern Ireland — while she was pregnant.

“I think it’s critical for people to understand that when you are living in that environment, when there are ... daily shootings, what other alternative do you have than to fight back against the beatings and the persecutions?” McAllister says.

In May 1981, Bobby Sands, an imprisoned member of the Provisional Irish Republican Army, died following a months-long hunger strike. Like many young men in his neighborhood in Belfast, McAllister was outraged and spurred to action. He joined the Irish National Liberation Army, a nationalist paramilitary group, and served as a lookout during an attack on a police officer, a member of the Royal Ulster Constabulary. McAllister was also part of a group that allegedly plotted to murder another officer, but that attack was never carried out.

McAllister was convicted of “unlawful and malicious wounding with intent to do grievous bodily harm” and “conspiring to murder” and served three years in prison. Before he went to prison, he says he left the paramilitary group. When he was released, McAllister got a job working construction, and tried to move on. But the fight for Irish independence continued around him.

On October 2, 1988, two Loyalist gunmen attacked McAllister’s house. McAllister and his wife, Bernadette, were on vacation, but their four children were at home with Bernadette’s mother.

McAllister, his wife and their children fled. They first sought asylum in Canada in 1988. Almost eight years later, in 1996, Malachy’s asylum application was denied. So, the family decided to drive across the border into the US. They entered as tourists in 1996 and asked for asylum the same year. 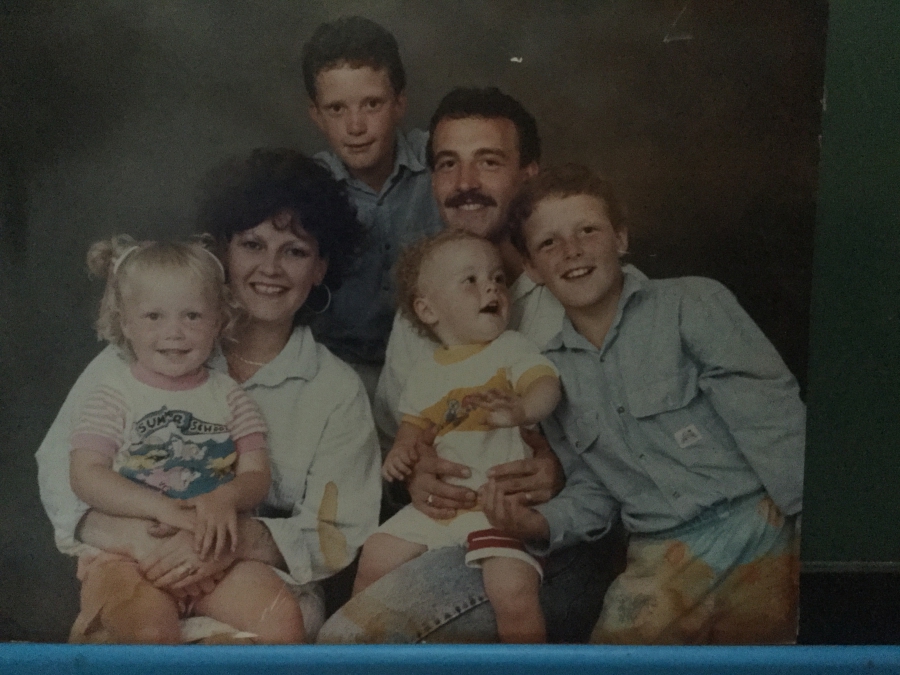 At first, the McAllister family sought asylum in Canada in 1988. They are pictured here at a Sears photo studio in Mississauga, Canada. They are, from left, Nicola, Bernadette, Jamie, Malachy, Sean and Gary McAllister. But Malachy McAllister’s application was denied. The family did not want to split up.

It took four years for their case to be heard by a judge and, in the end, McAllister’s claim of persecution was denied. Instead, the judge said that McAllister had engaged in terrorist activities and could be deported.

“My case fell through the cracks, and the big issue was 9/11,” McAllister says. The ensuing Patriot Act expanded the definition of “terrorist acts” and who can be considered a “terrorist.” “Once you are tagged with that ‘terrorist,’ that's very difficult to overcome.”

McAllister appealed the court's decision, and in 2006 the Third Circuit Court of Appeals denied McAllister's asylum claim. Notably, in a dissent (PDF), Judge Maryanne Trump Barry (the older sister of President Donald Trump) pointedly wrote: “We cannot be the country we should be if, because of the tragic events of September 11th, we knee-jerk remove decent men and women merely because they may have erred at one point in their lives. We should look a little closer; we should care a little more. I would ask — no, I would implore — the Attorney General to exercise his discretion and permit this deserving family to stay.”

“It's been before the courts, before Congress, before lawyers, before the court of public opinion. Before any court you can think of. And yet, here we are 21 years later, and it’s still not resolved. I don't know what that says,” says Ray O’Hanlon, editor of the Irish Echo. O’Hanlon has been covering McAllister’s case for years and says it’s difficult to explain why McAllister has never received any immigration relief or permanency for his family.

After McAllister and his family were denied asylum, members of Congress stepped in to help. Sen. Robert Menendez, a Democrat from New Jersey, is among several legislators who have backed private bills to allow McAllister and his two younger children to apply for green cards and stay permanently in the US. These bills are rarely voted on in Congress. Instead, they delay an immigrant’s deportation proceedings for as long as the bill sits in Congress.

That has changed under the Trump administration.

In May, the head of ICE wrote a letter (PDF) to members of the Senate judiciary committee to let them know that private bills would no longer automatically stay an immigrant's deportation. Immigrants like McAllister, supported by private bills, might have been allowed to stay for six months with a possible 90-day extension. But now, at McAllister's next check-in in October, he could be deported.

O’Hanlon, who has covered immigration for years, believes that McAllister’s case shows a deep failure on the part of the US.

“America suffers from its own hype — ‘Land of the free, home of the brave.’ People take that literally, and it doesn’t seem to be quite the case,” O’Hanlon says.

But sitting in his truck in May, five months before his next check-in, McAllister is not optimistic about his chances. Frankly, he says, he’s exhausted.

While his family waited for a resolution to their case, McAllister’s wife Bernadette was diagnosed with ovarian cancer in 2004. Six weeks after her diagnosis, she died.

More: In Boston, an Irish immigrant’s arrest highlights the role of race in immigration enforcement

In the 20 years since the family arrived in the US, one of McAllister’s children gained US citizenship through marriage. Another was deported to Ireland and now lives in London. And the youngest two are currently provided temporary relief from deportation under DACA, Deferred Action for Childhood Arrivals. If DACA ends — the Trump administration has not been consistent about support for the program — they would be returning to a country they left almost 30 years ago, and where their father’s name and case is well-known.

So, more than a decade after a judge denied him asylum, McAllister is still living in the US and still under threat of deportation. Since his first asylum trial, a report was published that documented collusion between British security forces and a loyalist agent and paramilitary organization that was connected to the attack on McAllister’s home. Last summer, loyalist Winstin ‘Winkie’ Rae was charged with two murders of Catholics in Ireland in the late 80s and early 90s and the attempted murder of McAllister.

None of this evidence existed during McAllister’s first asylum hearing. And the only way his case can be re-examined is if the head of the Department of Homeland Security agrees to reopen McAllister’s file.

Rep. Joe Crowley of New York says he has spoken to former Homeland Security secretary John Kelly — now the president's chief of staff — privately about McAllister. “We are willing to work as diligently as we can to keep him here and not send him back to where he would face bodily harm or death,” Crowley said in a phone interview.

ICE spokesman Luis Martinez said that the agency does not discuss individual asylum cases, and could not confirm that Kelly spoke to Crowley about McAllister’s case. However, he did say that deferring deportation on the basis of pending legislation is inconsistent with Trump’s executive orders.

McAllister’s next check-in with ICE is in October. He says he no longer knows what to expect.

“I hope it comes out the right way, but it's too much stress,” McAllister says. “I wake up in the night, and I am thinking of what the possibilities are, where we are going to be. Should I sell the house tomorrow? Should I pack up the business? Should I tell my employees, ‘All right guys, enough's enough’? I am unsure of what the future holds here.”