Kevin Christensen looks on as his son, Lane Christensen, sharpens an industrial drill bit. Christensen’s four-person company turned into an international exporter in a matter of months with help from the US Commercial Service.

Small, rural companies in North Dakota are increasingly turning to the US government to help grow their businesses, create jobs, and, in turn, boost their local economies. North Dakota business groups want the program expanded; they’ve been waiting a long time.

Kevin Christensen is an example of how the program can work. He turned to the US Commercial Service, the trade promotion arm of the Commerce Department, for help last year. He owns and operates the four-person Palmer Bit Company out of his small shop in Williston, in the northwest corner of North Dakota.

“My whole family works here, my wife does the books, I got my two sons here in the shop and I do the office work,” Christensen said.

He said that it’s great working with family, but admits that they also drive each other a bit nuts. Together, the family produces drill bits. Big ones.

“We’re talking, this bit is 250 pounds,” said Christensen, showing off one of the larger ones in his shop.

Christensen’s bits can bore through miles of earth to explore for minerals, water, and oil. He’s been making drill bits for 40 years. For the first 39, he didn’t try to sell them internationally. Then he went global, chalking up sales in 19 countries, everywhere from New Zealand to Belgium to Zimbabwe.

With exports, he said his revenues shot way up: — “22 percent. For a little company, it’s massive, it’s huge for us.”

He credits his growth to one person with the Commercial Service, and he’s not exaggerating by giving international trade specialist Heather Ranck all of the credit.

“I am the only person covering all of North Dakota and nine counties of northwest Minnesota as well,” said Ranck, who is based in Fargo. “If I didn’t have interns supporting me here, I would not be able to do it.”

What she’s doing is coming up with targeted export plans for rural companies. This has been difficult for government trade specialists, especially in lower-population states where staffs are small and budgets have been thin for more than a decade.

“It’s been very challenging to fill unfilled positions, and our staffing has declined pretty significantly,” Ranck said. “Since I’ve started here, 11 years, we’ve never really had an ability to staff.”

Related: The most ‘broken’ town in America is back on its feet

“I’m not supposed to comment on stuff like that,” said Ranck, who, as a civil servant, serves the president regardless of party. What Ranck will say is this: American companies need a boost.

“The US significantly underperforms for exporting compared to all the other OECD countries,” she said, using the acronym for a group of 34 advanced global economies. “We’re in dead last place.” The US exports just 13 percent of its GDP, according to 2015 numbers, the most complete data that are available. “A lot of companies view exporting as icing on the cake, instead of part of their business plan,” Ranck added. “So that’s my job, getting them to view it as an integral part of their business.”

Ranck introduced the export program she’s streamlined to a client, Spectrum Aeromed, a manufacturer of medical equipment used in airplanes and helicopters.

“I like to do a nine-step process, where you start with the worldwide analysis of countries. You guys pick three that you want us to focus on. If you were to think of an ideal market, what would you look for?” Ranck asked two executives at Spectrum.

Spectrum Aeromed’s Chief Operating Officer Chad Kost said they’re already selling their products in a few countries, but are looking for Ranck's help to expand to countries in Asia like China, Thailand and the Philippines. 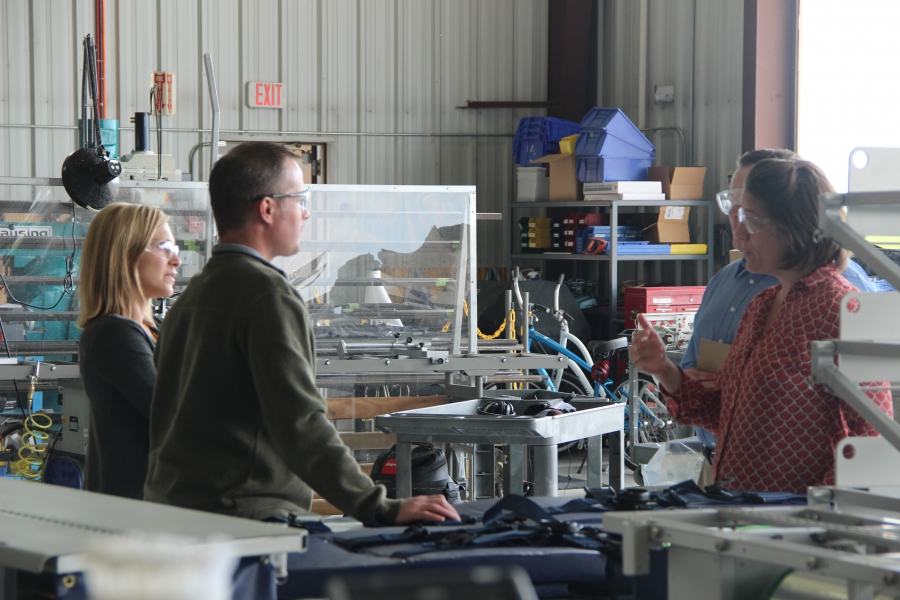 With her marching orders, Ranck and her interns will spend four to six weeks doing research and combing through government databases. Then, Ranck explained, Spectrum will be able to further tap into the unrivaled power of the US government.

“So let’s say you picked Greece, and we actually have an office in Greece, a US Embassy, and they can actually proactively go out and contact some of these people we found and others that they would know,” Ranck told the folks from Spectrum.

All of this help from the government will typically cost a company about $1,500. A private consultant might charge $50,000 for this type of research, and that’s without the on-the-ground connections from US embassies.

In rural states, exports are a lifeline for many local companies, said North Dakota businessman Tom Shorma, who chairs the volunteer organization the North Dakota Export Council. He argues that it’s actually easier these days to find new customers in Brazil than in New York or Texas.

“North Dakota is a small-population state, there are just over 700,000 total people in the state. So we have to sell what we grow and/or manufacture to other states or other countries,” Shorma says.

The problem is, again, resources.

Shorma understands budgetary realities, but he said if Washington is really serious about creating jobs and boosting the nation’s GDP, they should focus on exports; after all, 95 percent of the globe’s potential customers reside outside the US.

And there are already long-established government resources in place to help American companies reach them.