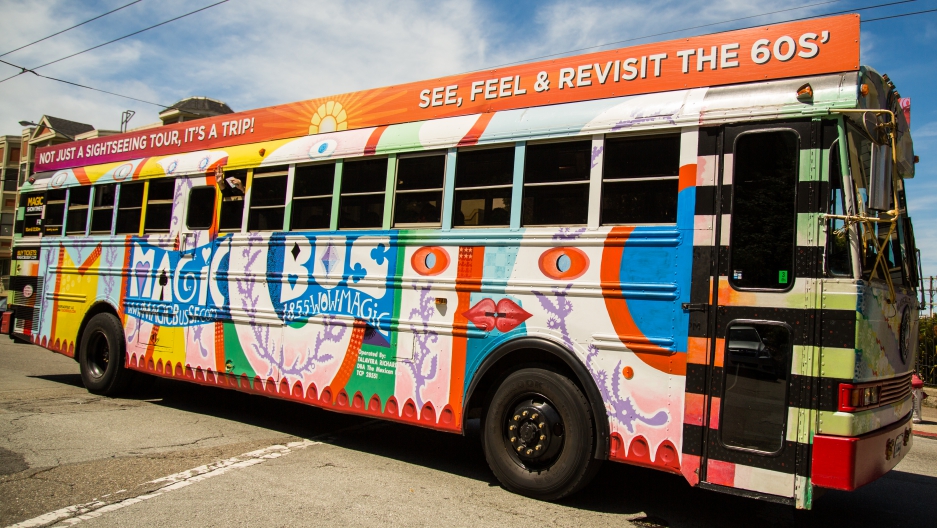 This weekend, I’m hosting an hour-long special on the BBC World Service, looking back at that wild revolutionary moment in the cultural and political life of America. And really the world.

I met some fascinating people in San Francisco making this radio documentary for the BBC, and I want to share with you some of what they told me. Because when you look around America and the world in 2017, it's hard not to think back about what a small community did to challenge the establishment 50 years ago.

At the Haight-Ashbury annual street fair last month, I met a man who was thinking about all this. His name is Helger and he was born in 1967.

Helger is German. He and his wife moved to the Bay Area for work about a decade ago. They loved it and decided to stay.

I asked him whether the hype around the 50th anniversary of the Summer of Love is nostalgia — or something else.

“I mean you know who [is] the president of the United States, and what we're seeing around the world, whether it's in Turkey or in other countries. We see a movement of democracy being abolished in some of the countries,” he said. “I think it's important for us to go out again and connect to people in real life and try also to have a conversation. I mean maybe we're a good example.”

Dennis McNally, former publicist for the Grateful Dead and a historian of the Summer of Love, said the cultural life of America was fermenting in said Haight-Ashbury in 1966.

“They experimented with psychedelics, with consciousness, with sexuality, with music, with all kinds of things.”

“They experimented with psychedelics, with consciousness, with sexuality, with music, with all kinds of things.”

The ones doing the experimenting were an eclectic mix of artists and writers, from Jerry Garcia and Grace Slick to Allen Ginsberg and Ken Kesey. They were folkies and jazz cats — actors and dancers. There were local business owners in the Haight, college kids, high school dropouts and people who just wanted to be part of the scene.

“They had such a good time that, at the end of it, they said, 'let's throw a party,’” said Dennis.

A party that would last, in theory, for three months. ... Word spread fast.

School was out, and the idea of being part of something exciting, radical and fun drew as many as 100,000 people to the streets of Haight-Ashbury that summer. The streets of the Haight were constantly packed.

Joel Selvin, a writer and former rock critic for the San Francisco Chronicle, said “San Francisco was this glorious beacon of this new life and it echoed throughout the world.”

South African trumpeter Hugh Masekela had fled the apartheid regime back home, and became part of the LA music scene. In June of 1967, Masekela played the Monterey pop festival. Before he had his big 1968 hit "Grazin' in the Grass," he was grazin' in something else.

"When you walked down the Haight Ashbury at any time, it was difficult to find somebody who wasn't floating," he said.
"When you say everybody was 'floating' in the Haight, what do you mean?" I asked.

"They were high. Everybody was high," he answered.

"Did you try LSD in California?" I asked.

"I didn't try it. I took it. I took it regularly. ... Very few people were not tripping," Masekela explained.

Just imagine the freedom the Haight presented for a young black artist from apartheid-era South Africa.

And, remember what else was going on in the world. It was the Cold War. Vietnam was at full tilt. The civil rights movement had gripped America.

Harry Strauch provides a pretty clear sense of the mood in the country — and the world — back in 1967.

His family had emigrated to the Bay Area from Vienna, and he ended up in the Haight, opening what was probably the first head shop in the US — In Gear. But in between, he made a stop at Harvard, where he saw the schisms in America on full display.

"I went to Harvard University where Henry Kissinger and Timothy Leary were teaching, both at the same time, in the same building where I was the philosophy librarian. And that was in Emerson Hall," he said. "And at each end of the building there were two lecture halls. And sometimes I would go down to one, and there was Kissinger talking about Realpolitik, and it was all loaded with these young future senator types. And at the other end of the hall was Leary talking to the psychology graduate students, and they were all taking mushrooms with the prisoners in the state's prison system."

Yeah kind of mindblowing. But that image neatly sums up the 60s.

There are so many legacies of the Summer of Love. But we've got to single out the music. 1967 was already a prolific musical year.

And then the San Francisco sound caught fire.

Writer Joel Selvin told me about how Paul McCartney had to see the scene for himself.

"He flew in from Los Angeles where he was doing some business, borrowed Frank Sinatra's Learjet, and spent the day and flew out without staying the night," he said. "He had a copy of Sgt. Pepper's and it was a test pressing. And he walked in unannounced to a rehearsal by the Jefferson Airplane. Can you imagine that? It's 1967 and you're playing with your little band in San Francisco and in your rehearsal, 'Hullo fellas,' comes Paul McCartney!" he said while laughing.

Well they knew what to do. They took him over to the Airplane mansion, and dosed him with DMT, which was a very cool designer psychedelic that was short-term, like the trip was like an hour," Selvin explained. "They called it working man's acid. And they sat around, and when everybody came back to Earth, they listened to the test pressing."

"He wanted to see San Francisco. ... He'd heard about it. He'd made this record that was a sort of imagining of it. This was something happening, what, 8000 miles away that he'd just heard about. It was a rumor."

"He wanted to see San Francisco. ... He'd heard about it. He'd made this record that was a sort of imagining of it. This was something happening, what, 8000 miles away that he'd just heard about. It was a rumor."

But it wasn't a rumor, it wasn't a dream. It was real. So real that musicians all over the world continued to fall under the spell of San Francisco for years to come.