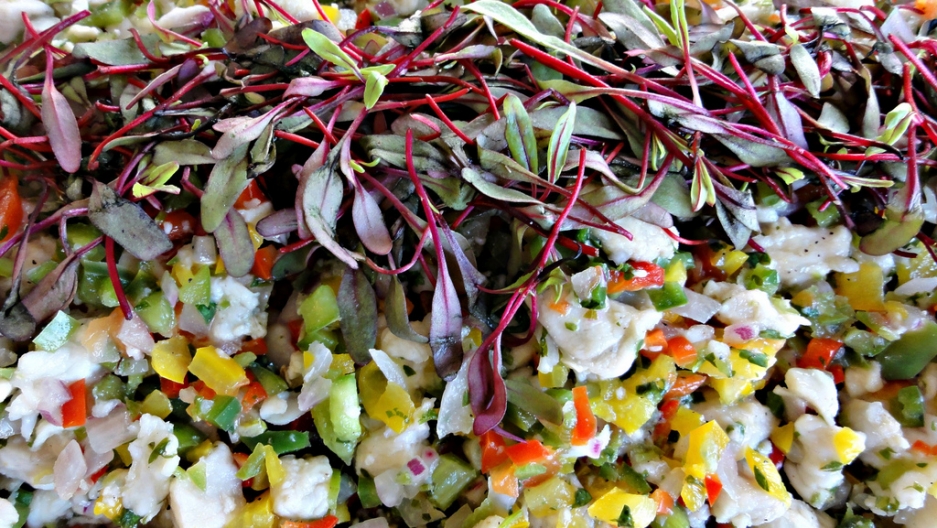 It’s the height of summer, and nothing sounds less appetizing than sweating over the stove to cook a meal. No one would blame you for turning to a diet of ice cream, salad and sandwiches — but with the help of science, you can expand your culinary horizons even further.

As Jeff Potter, author of "Cooking for Geeks: Real Science, Great Cooks, and Good Food," explains, there are plenty of ways to dehydrate, acid bathe and salt preserve your way to a delicious meal, sans oven.

To demonstrate, he brought samples of salmon, beef, scallops and more into the Science Friday studios. All of the dishes had been prepared safely without heat: The salmon was salt cured (gravlax), the beef was dehydrated (jerky) and the scallops were acid cured (ceviche).

“Heat really turns out to be a fantastic way to kill those pathogens that might make you sick,” Potter says. But there are other ways to do away with foodborne microbes, too, he says.

“There's this lovely acronym, ‘fat tom,’ where each letter stands for something that is important for microbial growth,” he says. Spelled out, the acronym points to food, acidity, time, temperature, oxygen and moisture. Tweak any of these factors, and you can make it tougher for microbes to survive.

Take the ceviche, for instance — which in Potter’s demonstration is just scallops soaked in lime juice. (At home, he adds extras like cilantro and onions.) “So, these scallops are previously frozen, which means anything that might be in the interior in terms of parasites would be killed by the freezing process,” he says.

Meanwhile, the acidic lime juice bath takes care of the scallops’ outsides. “It's basically taking the proteins on the outside and denaturing them, changing the way they are structured,” he says. “And that, of course, would also denature any bacteria that might be on the outside.”

Another easy, no-heat technique is to reduce the moisture in meats and other food. In the case of beef jerky, dehydrators mechanically remove the moisture, Potter says. In salt-cured foods like gravlax, he explains, salt does something similar: absorbing water, and thereby preventing it from being accessible to microbes.

The gravlax can usually last up to a week in the refrigerator, and Potter says well-processed beef jerky can be stored even longer — for years. “The food safety people don't say years,” he adds. “But there's nothing that should be problematic there.”

What if you can’t avoid cooking this summer? In that case, Potter suggests another science-based solution: The pressure cooker. He estimates that if you’re making a juicy roast that would need six hours in the oven, it might take just an hour or two in the pressure cooker.

“If you do it in a pressure cooker, where your temperature can get up to about 240 degrees — and that's based on increased pressure, so you're going to have an increased boiling point, so the rest of the muscle tissue can get hotter in that environment — things like the breakdown of collagen will occur much, much faster,” he says.

Or, you can turn that roast into beef jerky. Here’s how.