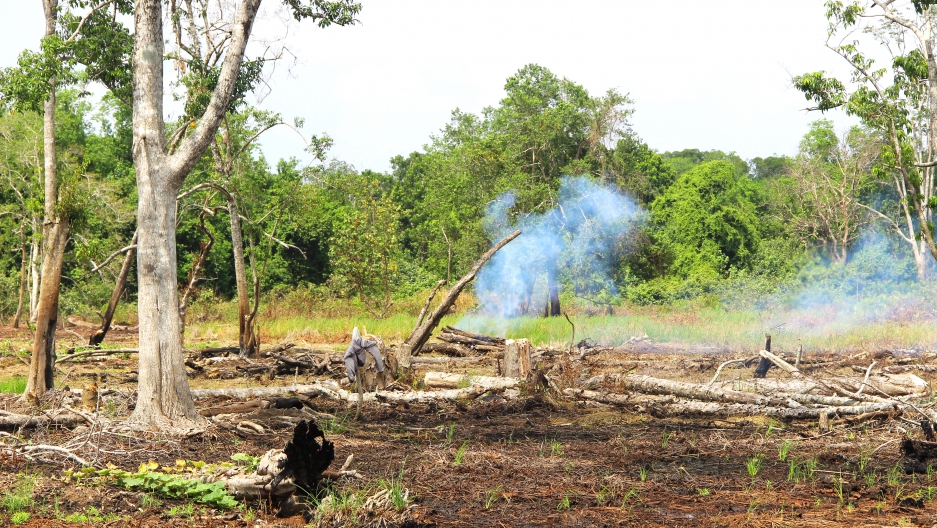 A small patch of forest still burns after being cleared for farming in West Kalimantan, Indonesia.

A key strategy in the fight against climate change is slowing the rapid destruction of the world’s forests.

When trees burn or decompose, they release carbon. About 10 percent of the greenhouse gases emitted every year are from this newly freed carbon rising into the atmosphere.

In recent years, developed countries have committed billions of dollars to help developing countries prevent deforestation. Some of the funds have been used to pay landowners not to cut down their trees. Part of the goal is to give landowners income that isn't dependent on clearing land for agriculture or selling timber to meet big expenses.

Costa Rica was the first country to start this kind of program 20 years ago, and several countries, including Mexico, have followed suit. But conservationists have long questioned how well they work. How many people who get paid not to cut down trees would have done so in the first place? Will people just shift their timber harvesting to different areas? Are these programs cost-effective?

A new study, published in Science magazine Friday, is the first to analyze a landowner payment program in a randomized trial — the gold standard of field research that is common in many areas of study but rare in conservation.

In western Uganda, a local conservation group identified 121 villages with private forest owners and randomly selected 60 of them to be eligible for the program. The vast majority of residents in the select villages said they had cut down timber on their land in the past three years.

From 2011 to 2013, landowners who opted into the program were paid about $11 per year for each acre of forest area they preserved. At the end of the program, satellite images found that in the participating villages, roughly 4 percent of local forest cover was lost. In the places where business went on as usual, 9 percent was lost.

Participating landowners received an average of $113 over the two-year period, and even after incorporating total program costs, Northwestern economist Seema Jayachandran and her collaborators determined that the cost-benefit ratio of the program was a positive one. “The [program] is less expensive per metric ton of averted CO2 than many policies in the United States for which similar cost-benefit analyses are available, such as hybrid and electric car subsidies; those policies cost 4 to 24 times the CO2 benefits they generate,” wrote the researchers.

If the program became permanent, Jayachandran estimated the cost of averting a metric ton of carbon would be $2.60, significantly less than the so-called social cost of carbon, which the Environmental Protection Agency in 2012 assessed at roughly $39.

This is the most convincing evidence recorded so far that these types of cash payments to landowners work to prevent deforestation. But only about a third of landowners in eligible villages chose to participate. And it’s not clear how easy it would be to scale this program up or whether costs would rise if it were made permanent.

“While this is pathbreaking work, it leaves open some big questions,” said Daniel Miller, an assistant professor of natural resources and environmental sciences at the University of Illinois, who raised concerns about the long-term sustainability of programs like the one studied in Uganda.

“Financing for such programs is notoriously unstable, so what will happen if the funding dries up? Answering these questions to understand the persistence of program impacts like those found in this study is a real research frontier.”