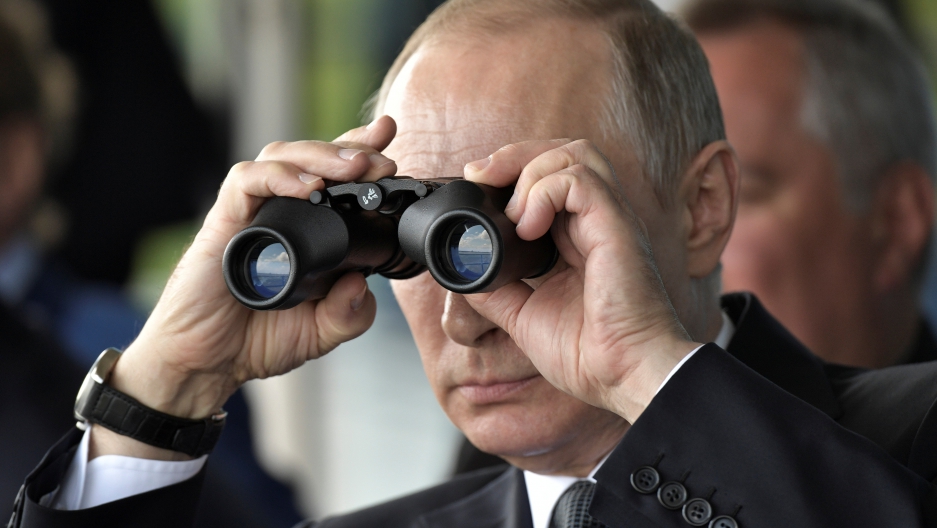 Russian President Vladimir Putin watches a display during the MAKS 2017 air show in Zhukovsky, outside Moscow.

Up until a few years ago, the Russian leader seemed to all but ignore the internet and spoke out loudly against it. He called the web a "CIA project," with interests that opposed Russia.

"Television was the main way he got his news and the main way Russians got their news," says Lourie, who explores the Russian president's conversion to online espionage in his new book "Putin: His Downfall and Russia's Coming Crash."

Lourie notes that about 80 percent of Russians follow official TV news sources, about the same percentage that, according to some estimates, support the Russian leader.

"It's worked perfectly well for him," Lourie says. "Plus, his general mindset and sensibility would incline him to television as opposed to the internet because [TV] was solid, it was real, it was predictable, it was controllable, it was right there, it was physical and tangible. The internet was vague, it's decentralized, anyone could get anything, any time, any place. To some degree, [the internet] is a totalitarian nightmare. It's by its very nature democratic, tending even towards the anarchic."

Today, Putin's government seems to be wildly successful at exploiting the web, and using it to discredit opponents. For example, Russians seem to have a special expertise at bringing the internet to bear on what they call kompromat — compromising material — a thing that has a rich tradition in Russia politics.

Still, the ease with which former CIA employee Edward Snowden leaked reams of classified documents demonstrated to Putin just how dangerous the internet could be for any leader. And Lourie says, ultimately, the internet's power and reach will leave Putin and his associates vulnerable.

"They're terrified of the Russian equivalent of an Edward Snowden appearing," Lourie says. "Younger people are increasingly getting their news and their views from the internet, not from newspapers or television. The Russian internet is still free enough that you can get news and information and ideas through it, without tremendous effort. So, ultimately the hope of Russia is the coming generations who have had no Soviet experience and are increasingly a product of the web."