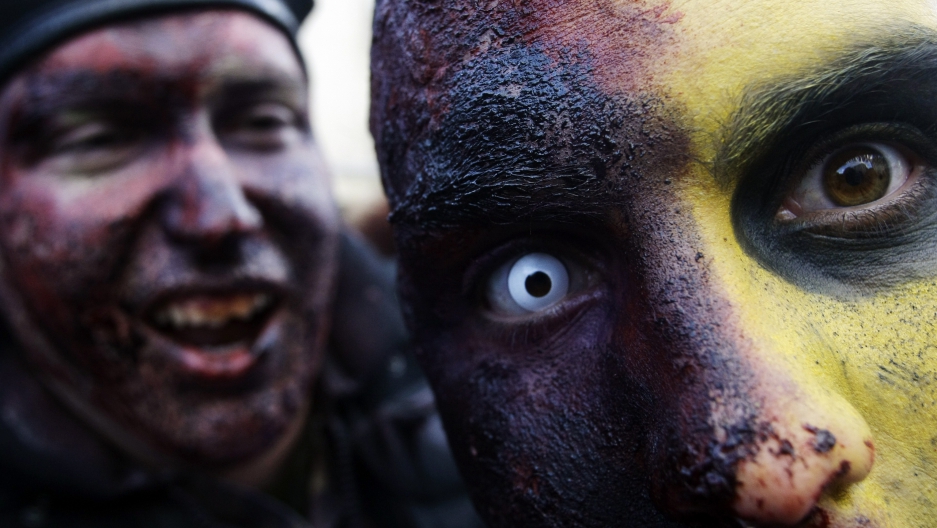 People dressed like Zombies take part in a Zombie gathering in Madrid February 7, 2009. Men and women from all over Spain gathered in Madrid to celebrate "Zombie Pride Day" and to pay homage to George A. Romero, director of horror film classic "Night of the Living Dead."

George A. Romero died on Sunday at the age of 77 after a battle with lung cancer. The Pittsburgh filmmaker was revered as the godfather of the modern zombie film. With "Night of the Living Dead" (1968), he set the rules for zombies that still hold fast today for many films about the undead. You must destroy the brain or remove the head to kill them. And if you get bit by one you become one and then you crave human flesh.

In 1978 Romero made the sequel "Dawn of the Dead" and turned to the Italian rock band "Goblin" to do his score. The band had composed music for films by Italian filmmaker Dario Argento. Argento in turn distributed "Dawn of the Dead" in Italy under the title of "Zombie." Then, when his compatriot Lucio Fulci decided to make a zombie movie, Fulci called it "Zombie 2" to tap into the popularity of Romero’s film. Fulci also took his cue for his slow-moving reanimated corpses that craved human flesh from Romero’s two movies. But being Italian, he had to make it a bit more operatic with bold flourishes of gory style.

However, Romero did more than just create a movie monster. He suggested that zombies could be a blank canvas for social commentary and a way to explore what it means to be human. 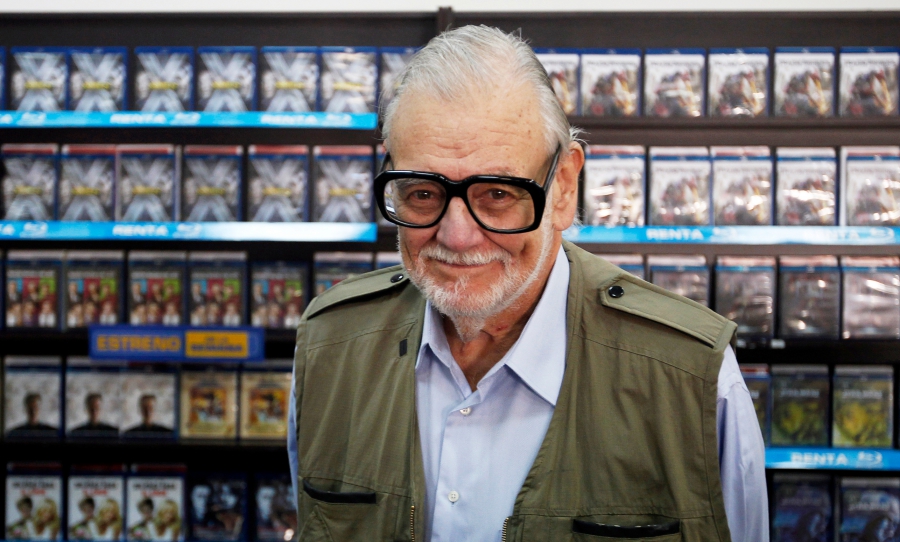 US filmmaker George A. Romero, also known as the Zombie Master, poses for the media during the Hallowfest news conference in Mexico City October 21, 2011.

In 2004, British filmmaker Edgar Wright wanted his zombie film to tie into the lineage of Romero’s films.

Wright injects "Shaun of the Dead" with an unflappable British cheeriness even in the face of a full-scale invasion of the living dead. Plus his film uses zombies to make a satirical comment on the ills of society. Simon Pegg starred as Shaun and co-wrote the script with Wright.

"We wanted to keep that spirit that George Romero started off, which is to use them as he did with Dawn with consumerism, and Day, which was vivisectionists and use them as a metaphor," Pegg said.

Wright added, “The zombies meant different things in different eras. We always said our zombies are a metaphor for apathy. It's kind of like the great plague is laziness, so it was like the zombies represent sloth.”

Aarón Soto, a Mexican filmmaker and coordinator of "Rue Morgue Mexico" (the Mexican section of the magazine "Rue Morgue"), spoke about more artists who looked up to Romero.

“In Mexican cinema history there are many filmmakers that mention they have been influenced by Romero’s work, from Juan López Moctezuma, director of the satanic nunsploitation 'Alucarda,' to superstar Guillermo del Toro,” Soto said. “But the straight-up zombie films that pay homage to Romero are 'Cementerio del Terror' (Horror Cemetery, 1985), by Rubén Galindo, and Alejandro Jodorowsky's 'Santa Sangre' (1989), a surreal serial killer film that, according to Jodorowsky, is very inspired by Romero — including a haunting scene were the dead come out of their graves.”

In Cuba’s "Juan of the Dead," zombies are made political scapegoats. The government news identifies the zombies as “dissidents financed by the United States.” In the end, the thing that defines the title character of Juan is that he loves his country and no matter what comes, he will stay and he will survive. He jokes that he survived notorious episodes in history like the exodus of the Mariel boat lift, the Cuban intervention in Angola, and economic crises he calls "that special period and the thing that came later." So, he'll survive the zombie apocalypse no problem. The film uses the zombie apocalypse to celebrate the spirit of the Cuban people. These are people who can fight zombies with slingshots or make a boat out of junkyard trash.

As more and more countries around the globe serve up their versions of the zombie apocalypse, each owes some debt to Romero — be it Hong Kong’s "Bio Zombie" overtly spoofing Romero’s films or the self-aware zombie in Canada’s "Fido" recalling Bub in "Day of the Dead" or Singapore’s "Hsien of the Dead" just riffing on the familiar titling.

Unlike the many corpses that he reanimated back to life in one 'Dead' movie after another for four decades, Romero now lies in peace. But he leaves behind a legion of shambling, socially conscious zombies that continue to inspire filmmakers around the globe.

Beth Accomando is an arts and culture reporter for KPBS. She is the host of the podcast "Cinema Junkie."