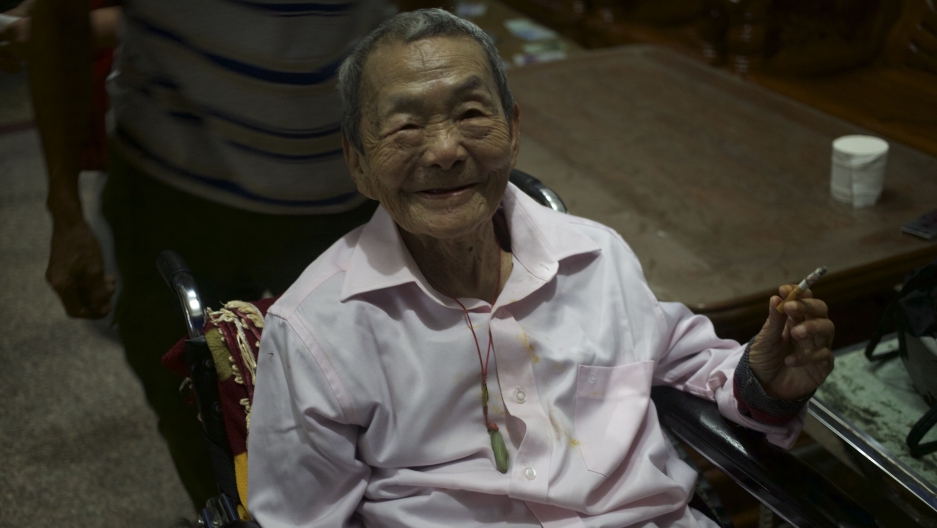 This piece is courtesy of Coconuts Media. More of their reporting on Myanmar can be found at "Coconuts Yangon."

Olive Yang, the royal-turned-warlord, whose CIA-supplied army consolidated opium trade routes in the Golden Triangle in the 1950s, had tabloid-fodder romances, and later in life served as a government peace broker with Kokang rebels, died on Thursday. Yang was 90.

She died after a brief coma in Muse, a city on the border with China, in the care of a relative who confirmed her death by phone. Yang spent her twilight years there, unable to return to her birthplace in the embattled semi-autonomous ethnic rebel territory in northeastern Myanmar known as Kokang.

Born Yang Kyin Hsiu in 1927, in British Burma, the boyish daughter to the hereditary royal ruler of the Shan state of Kokang, Yang fled her ancestral home when it was burned by invading Japanese troops in the Burmese theater of World War II. She was forced into an arranged marriage with her younger cousin; by her wedding day, both her parents had died. Yang was expected to produce an heir for her husband, who himself was the chieftain of a smaller neighboring clan in Shan State.

In one version of the story, Yang threw a urine pot at her husband in a fit of rage when he tried to consummate their marriage.

According to relatives, Yang’s choice to pursue a career as an opium trafficker was made out of desperation to escape her roles as a wife and mother in a society with few alternatives for gay women.

“She found herself living on the fringes of society,” niece Jackie Yang wrote of the young mother’s decision to abandon her husband and son in "House of Yang," a Yang family history self-published in 1997. “When the [Chinese Nationalist]’s invitation came to lead an army of 300 men, it was a temptation she couldn’t resist.”

In Yang’s dedicated file housed at the National Archives in Yangon, a 1950 letter she wrote to the Shan State commissioner describes the four-day journey from her husband’s home to a militia outpost on the Chinese border, accompanied by “employees” and several loaded mules.

Along the way, the record shows, Yang had kidnapped drunk Burmese police officers who attempted to extract bribes from the caravan. She took them all the way to her new militia’s headquarters, tied up with rope. She characterized the incident as a “misunderstanding.”

“I knew I had done a very careless thing for which I feel very much ashamed,” Yang said in the letter, by way of explanation to the commissioner.

She would have been no more than a few weeks pregnant at the time.

Not long after Yang gave birth in 1951, an intelligence dispatch sent to the Shan State commissioner described Yang, then aged 24, as a “manly hearted” menace dressed in men’s fatigues, with “at least one pistol at her hip,” and hundreds of dacoities under her command, collecting taxes on the caravans of raw opium they guarded across the Kokang hills to the border with Thailand. At her peak, she commanded more than 1,000 troops, records show.

Among Yang’s clients was the newly formed CIA, which in exchange for opium, armed numerous trafficking militias in the Golden Triangle, including thousands of remnants of Chinese Nationalist (KMT) troops. The covert plan, dubbed Operation Paper, devised as an early Cold War strategy against communism, was approved by US President Harry S. Truman in 1950. 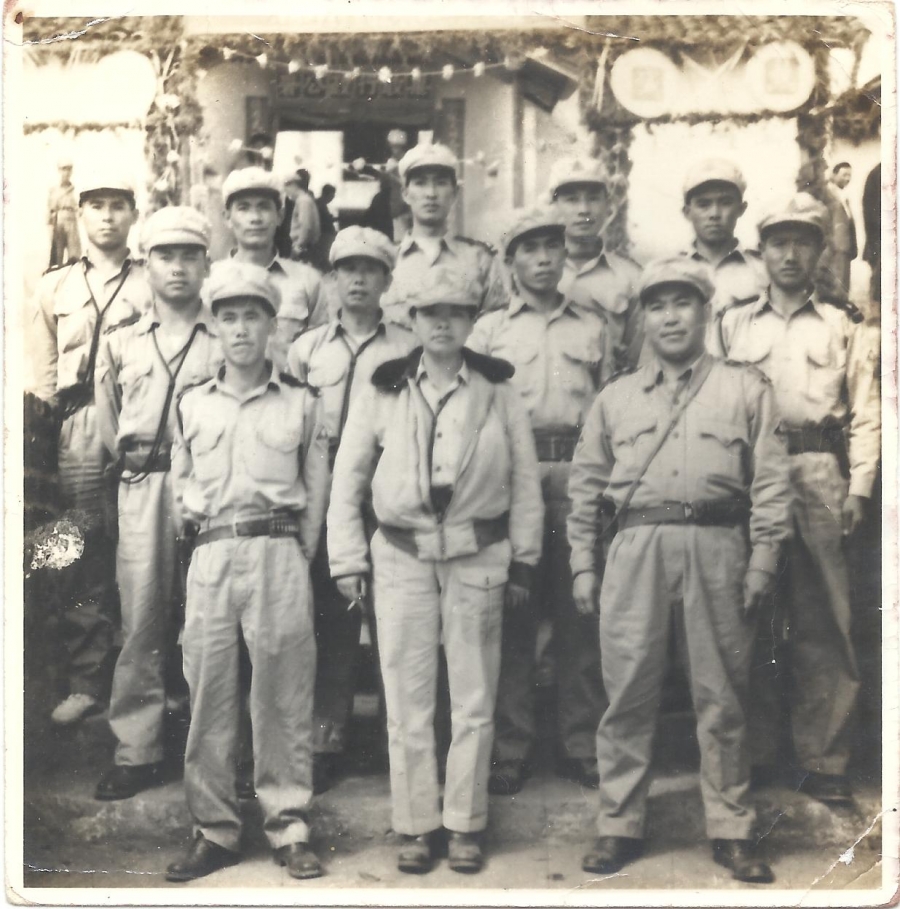 Olive Yang is pictured with her soldiers circa 1956.

Courtesy of the Yang family

One such US arms drop in 1952, when Yang’s army traveled across the border to an airfield in Thailand to receive weapons from an unmarked C-47 aircraft, is documented in a complaint filed by a Burmese government delegation at the UN in 1953. The diplomatic crisis between Burma and the US became so fraught, it prompted a visit from then-Vice President Richard Nixon later that year.

The trade routes Yang pioneered would eventually give rise to the world’s most productive opium-growing region, and became a blueprint for similar programs repeated by the CIA around the world, including in Afghanistan’s Golden Crescent, according to Alfred McCoy’s 1972 book "The Politics of Heroin."

Burmese authorities arrested Yang along with her deputy and close confidante, Lo Hsing Han. He went on to become the DEA’s most-wanted drug kingpin worldwide, producing opium that was widely trafficked across Europe and the United States. Yang spent several years in prison in Mandalay, on charges she aided Chinese soldiers in illegally crossing the border.

“It wasn’t easy growing up without a mother,” Yang’s son, Duan Jipu, 67, said in a 2016 interview at his ramshackle home outside Chiang Mai, Thailand. Raised by a wet nurse, he recalled a childhood spent in the care of uncles, hearing tales of his mother’s bravery, enjoying only short visits with her in between drug runs, lesbian lovers and stints in prison.

Yang named her son Jipu, after the Jeep cars she saw American soldiers driving during World War II in Kunming, China. “I like my name, because it reminds me of her,” he said. Though he thinks of her often, he has not communicated with his mother in several years. “When I miss her, I just look in the mirror.”

As one of 11 siblings, it was Yang’s elder brother, Edward Yang, who assumed the royal title of sawbwa, along with administrative powers over the territory known today as Kokang, and command of a small army to protect it. The relationship between two siblings competing for power became so fraught it led Burmese authorities to suggest, in his archived file, that Mr. Yang was afraid of his sister.

Mr. Yang abdicated in 1957, allowing the territory to formally join the Union of Burma, along with dozens of other ethnic Shan chiefs. Yang seized command of her brother’s former army, earning a reputation as a champion of the Kokang people in the face of Burmese chauvinism—and a small fortune through the opium trade and other businesses in the process.

Away from her family, Yang found rare acceptance among the soldiers she commanded. “We adored her. She was like a mother to me,” said Liu Guoxi, a former soldier in Yang’s army, who in 2012 became a member of parliament for the military-backed USDP. He once guarded mule-mounted caravans of opium alongside Yang, and described her as a sharp shot, adept on horseback. “She was at least as brave as any one of the men. She was no different to us.”

Always looking for love in the wrong places, according to her surviving relatives, Yang found herself on the unrequited side of a love triangle with her own brother, Kenneth Yang, and Karen beauty queen Louisa Benson. In 1960, she courted actress Wah Wah Win Shwe, who had shot to fame with her first film at age 16, and the relationship became the subject of gossip tabloids. Yang lavished the starlet with expensive gifts, even adding her young lover’s name to the deed of her house on University Road in Yangon. She remained living in that house during Yang’s imprisonment by dictator Ne Win’s men in 1963. 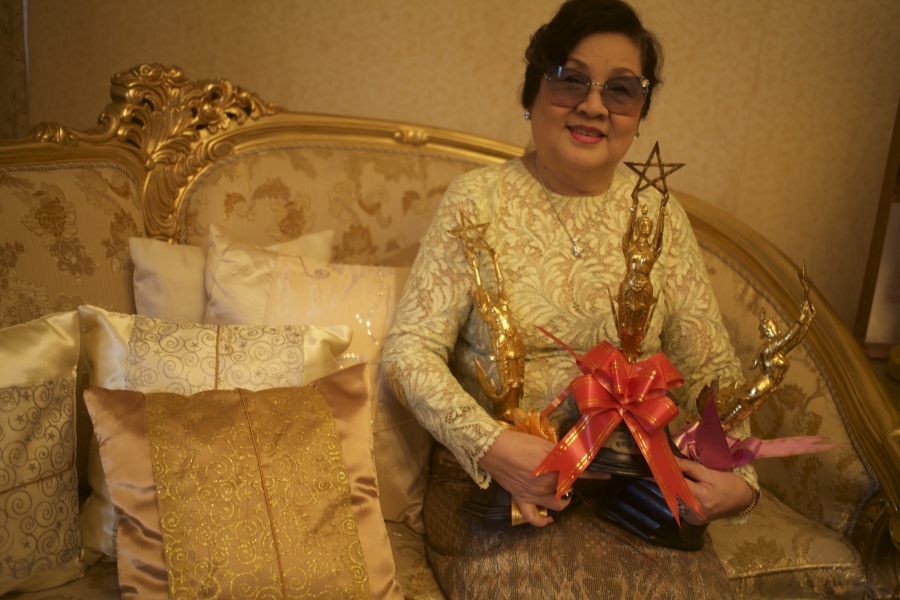 Actress Wah Wah Win Shwe, pictured here in her home in 2015 with the three Myanmar Academy Awards she won as a film star, denied the affair with Olive Yang.

Ms. Win Shwe lives in a new house on that same property today, with her husband and children. Interviewed at her home there in 2015, she denied the affair.

For over six years, Yang languished in Yangon’s Insein Prison, much of it in solitary confinement, where she suffered torture and sexual abuse, she claimed to relatives years later. Homeless and broke following her release, Yang lived in the homes of friends and family around Yangon for decades.

In 1989, because of Yang’s well-connected status among the complex tangle of drug-financed ethnic armies arrayed across northern Burma, she was recruited as a liaison, by U Khin Nyunt, then-spy chief, along with her former protégé, Mr. Lo, to negotiate peace agreements for the Burmese government.

The agreement they struck with the Kokang rebel force, the MNDAA, headed by Yang’s distant relative, Peng Jiasheng, lasted until 2009. Fresh clashes in March this year near the Kokang capital dealt a further setback to the Aung San Suu Kyi government’s halting peace process, which intends to bring an end to the world’s longest-running civil conflict.

In a life that spanned the transformation of British colonial Burma to the fledgling democracy of Myanmar, Yang did not live to see the end of the civil war in the land that was her birthright, facilitated by the drug trade routes that were her legacy.

Yang’s lifelong struggle with an inability to conform to Burmese society’s female gender norms earned her the moniker “Hairy Legs,” and led journalists to erroneously describe her as “bisexual.” Later in life, however, she asked to be called Uncle Olive.

Her brother Francis, who predeceased her by a few months, said he still felt regret when he thought of how frequently he scolded his sister for not being normal.

“We would ask her why she didn’t wear women’s clothes or why she had to have a short haircut. We would shout at her for chasing women,” he said. “Back then we didn’t know about lesbians and transsexuals.”

“I told her when I went to visit her two years ago that I was sorry,” Francis said in an interview at his home in London in 2015.  “I told her, I will call you ‘Uncle’ from now on.”

Alice Dawkins contributed to this report.

Editor’s Note: Olive Yang’s gender identity is difficult to explain. Yang's native language, which is similar to Chinese, doesn’t use gendered pronouns at all. That, in combination with being born in the Golden Triangle at a time when various terms for gender identity didn’t exist, may have contributed to her not ever stating a preference for how she is referred to. Later in life, Yang preferred to be referred to as Uncle Olive.