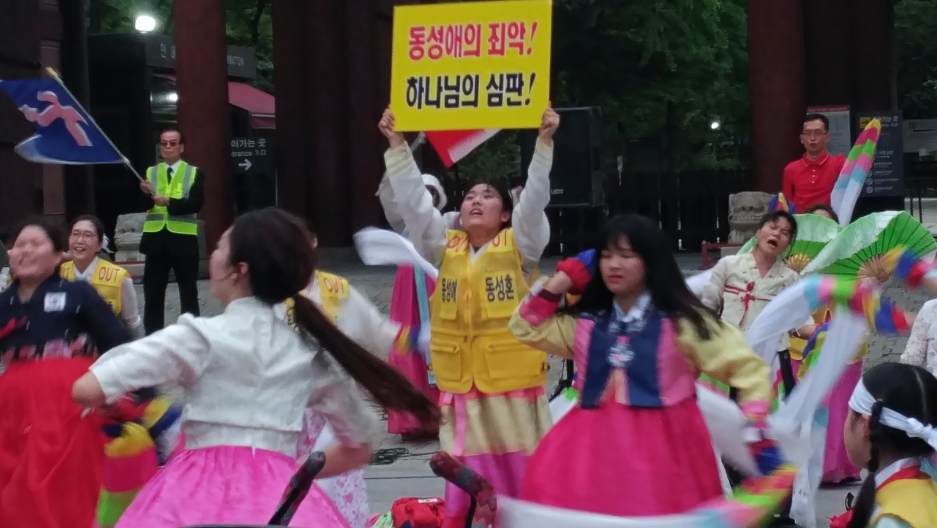 Across the street from the Korea Queer Culture Festival, protesters dance and sing while one woman jumps up and down and holds a sign that says “Homosexuality is a crime! It’s god’s judgment!”

Hoon would only hold his boyfriend’s hand at night, in the shadows of Seoul’s narrow alleyways, where no one could see them.

“Whenever my boyfriend tried to do something, I was so defensive because people around us might think that we’re gay,” he said.

But, in all truth, Hoon is gay. The 24-year-old college student just doesn’t want most people to know it. Hoon didn't want his full name published because of the stigma LGBT people face in South Korea.

“There are so many people who hate us, and I don’t want to make someone angry or have someone start yelling at me,” he said. “We do worry about discrimination and hate speech all the time.” 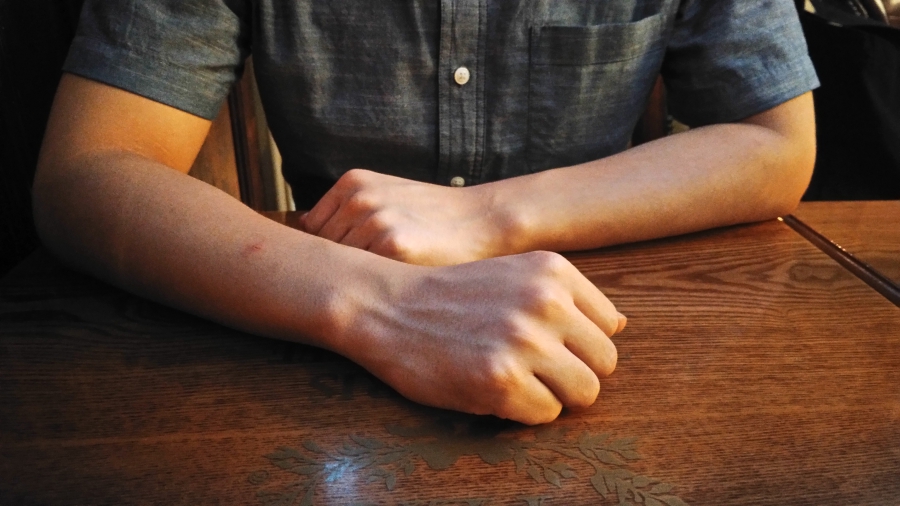 Hoon, who only shared part of his real name for fear of retribution, tells his story at a coffee shop near his internship in Gangnam. Hoon will graduate college in a few months and begin working in PR.

Hoon is among the thousands of people who plan to march in Seoul’s queer parade on July 15, despite the anticipated protests from the religious right, who hold their own anti-gay festival on the sidelines each year. In South Korea, there are still no laws banning discrimination against LGBT people, and even Moon Jae-in, the nation’s new liberal president, has failed to support gay rights.

In a televised presidential debate last April, he stated that he “opposes” homosexuality — a possible pander to Christian lobbyists and the general public, since a pro-LGBT agenda can be politically risky in South Korea.

Across the street from the Korea Queer Culture Festival’s opening ceremony at Seoul Plaza on June 14, a group of about 50 to 100 conservative Christian protesters danced, sang and shouted anti-gay slogans into their microphones. In addition to calling homosexuality a sin, the religious right frequently claims that gay men weaken the military and make the nation vulnerable to North Korean attacks. Some call LGBT people a derogatory term that translates to “pro-North Korean gays,” for example. 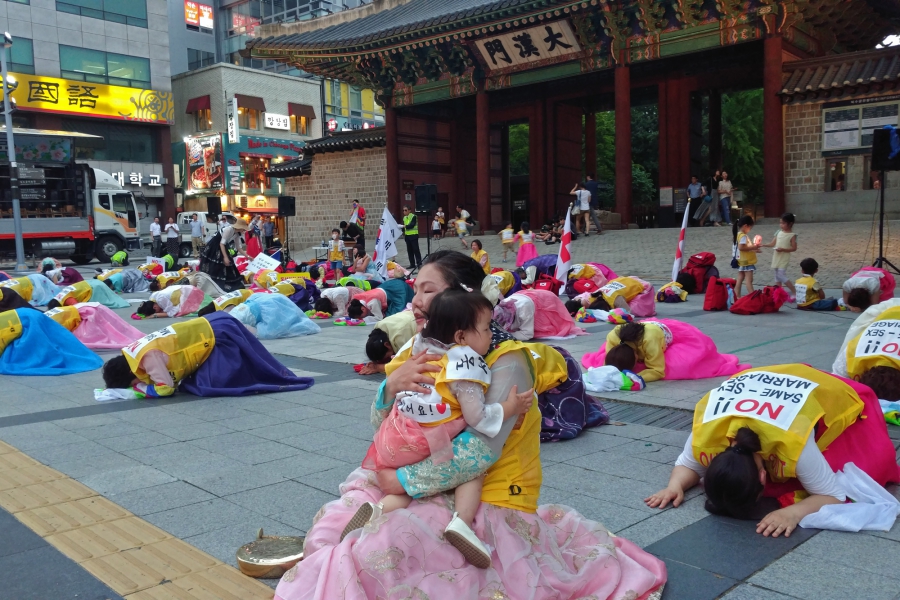 A woman holds her child among a group of anti-gay, conservative Christian protesters, who bowed in silence for several minutes across the street from Korea’s Queer Culture Festival on July 14

“LGBT rights and protests for LGBT people aren’t really well-received in Korea,” said Jiyoon Kim, a research fellow at the Asan Institute. “A lot of people think LGBT rights are not a matter of human rights. People tend to think of it as a very peculiar sexual taste.”

Overall, a 2015 public opinion survey suggests fewer than 30 percent of South Koreans support gay marriage. Even among young adults, feelings are fairly lukewarm — only about half of people in their 20s said they “tolerate” homosexuality, though that’s a nearly 21 percent increase from 2010. Support from the oldest generation — people aged 50 and above — has largely remained under 14 percent during that time period.

Related: In South Korea, being gay is still taboo

It’s true that Taiwan became the first Asian country to legalize gay marriage in May 2017, and in South Korean media, gay celebrities and gay TV characters are becoming increasingly common. But South Korea is still a place where unveiling sexual orientation can come at a significant cost — especially for able-bodied young men, who are required to serve in the military for two years, where they’re subjected to laws that criminalize homosexual intercourse. Earlier this year, the South Korean army’s chief of staff ordered an investigation to identify gay soldiers, which ultimately produced about 40 or 50 names, according to Amnesty International. One soldier was sentenced to six months in prison for having consensual sex with another man.

“The military system is a major obstacle for sexual minorities,” said Youngshik Bong, a researcher on gay rights and a fellow at the Yonsei University Institute for North Korean Studies. “It’s a breeding ground for masculine culture and binary identification of gender — male versus female.” 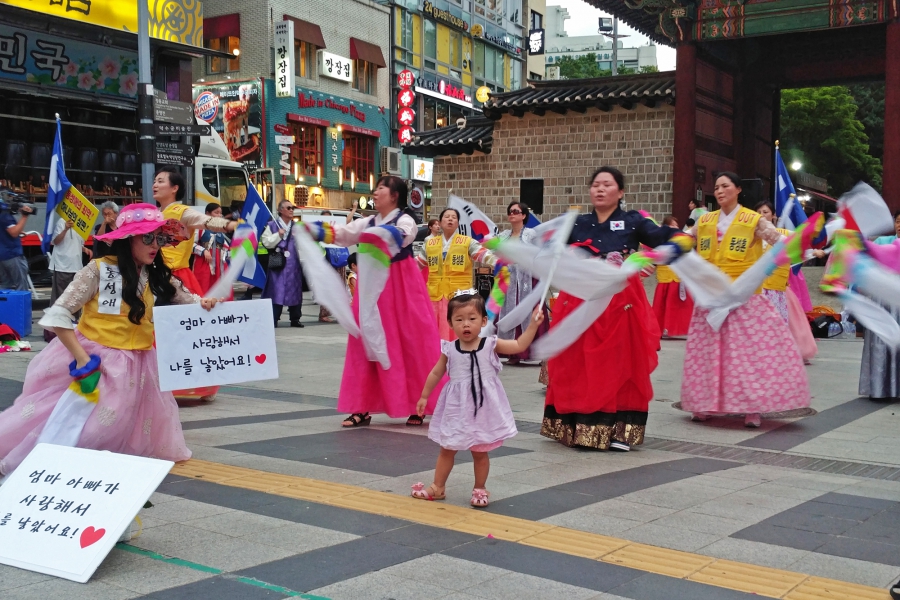 "A young girl waves South Korea's national flag during an anti-LGBT, conservative Christian protest across the street from Korea's Queer Culture Festival on June 14. The woman next to her (left), her caretaker, holds up a sign that says "My mother and my father love each other, so I came to be."

Hoon knows of at least two people in his network who were arrested during their military service. One of them allegedly spent three days in jail after being catfished by military officials pretending to be a gay man on a dating app. The other, he says, was coaxed into admitting his sexual orientation to a fake account made by military officials on “gaysbook” — a term for secondary, openly-gay Facebook accounts kept by members of the LGBT community.

“It was quite sad. Still, people care about it,” he said. “On the apps, there are also many straight people — mostly men — who try to find gays in their area and then [spread the word] about them. It’s very offensive.”

But as news about military arrests started to trickle in, Hoon was actually surprised. When he served in the military from 2013 to 2015, most people “were very considerate,” he said.

Hoon had accidentally come out to his parents at age 16, when they found a pamphlet from a gay youth center in the house. Their reaction was supportive, he said, and so he felt comfortable checking off a bullet point on the military mental health exam that asked if he identified as transgender or if he’s attracted to the same sex. A military doctor recommended that he go to therapy for six months leading up to his service, and a few high-ranking officials were told about his sexual orientation when he arrived.

“When I got to the training center, the captain called me in to see him man-to-man,” Hoon said. “He [sympathetically] asked me, ‘What if you love someone in the army? That’s going to be painful.’ That was quite nice. He really cared.”

Yet Hoon, seemingly level-headed and forgiving in nature, also laughed as he recalled one lieutenant who called him into a meeting to ask “humiliating” questions.

“He asked me, ‘Have you ever had sex with a girl? How many times have you slept with guys? What’s your position?’” Hoon said. “He was just curious because he didn’t know anything — he just couldn’t understand it.”

Change may be coming

South Korea’s story is one of incredible transformations, and gay rights may soon be no exception. The country is largely known for its rapid transition from one of the poorest nations on the planet to a major world economy in less than 70 years. Now, the LGBT community’s growing visibility may encourage more people to openly back LGBT rights.

Several hundred people turned out for the festival’s opening ceremony on June 14, sitting on the grass and clapping as they listened to live music and remarks from major foreign ambassadors. This year marks the 18th consecutive event, and it touts a demanding slogan: “There is no later. We demand change now!” 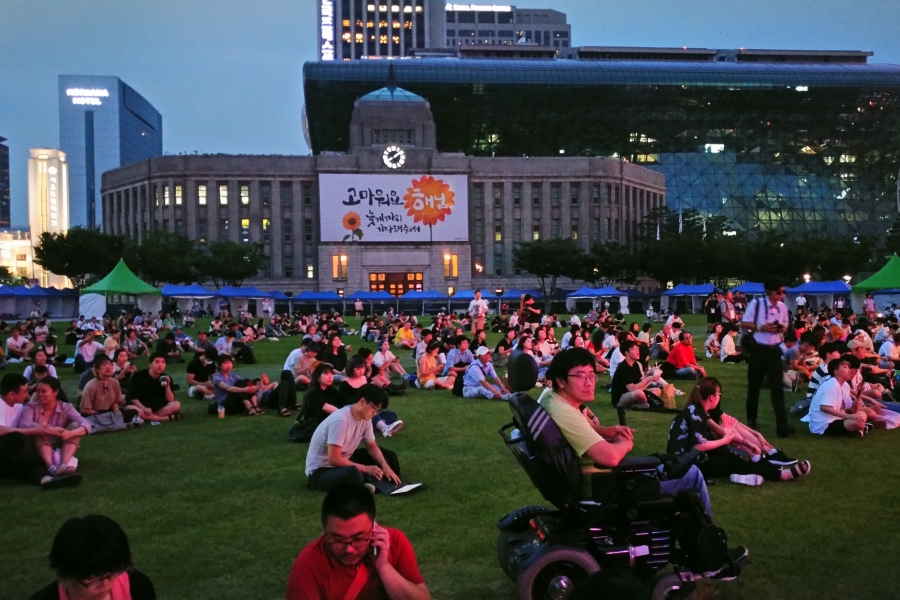 Hundreds of people gathered in Seoul Plaza to listen to live music on the night of July 14, marking the official opening ceremony of the 18th annual Korea Queer Culture Festival.

“Even five years ago, many people didn’t even know what ‘gay’ means,” Hoon said. And though many Koreans like himself continue to only share their sexual identity with their closest confidantes — if at all — experts believe collective political action could be on the horizon.

“These days, you do see a lot of emerging, new, young leaders in the LGBT movement who are lawyers, movie directors, actors, scholars, doctors, pastors,” Bong said. “We are witnessing a very positive generational change, and so now sexual minorities are being advocated for by their own members. That’s the most important development.”

Kelly Kasulis is a correspondent for The GroundTruth Project. She reported this story from Seoul.