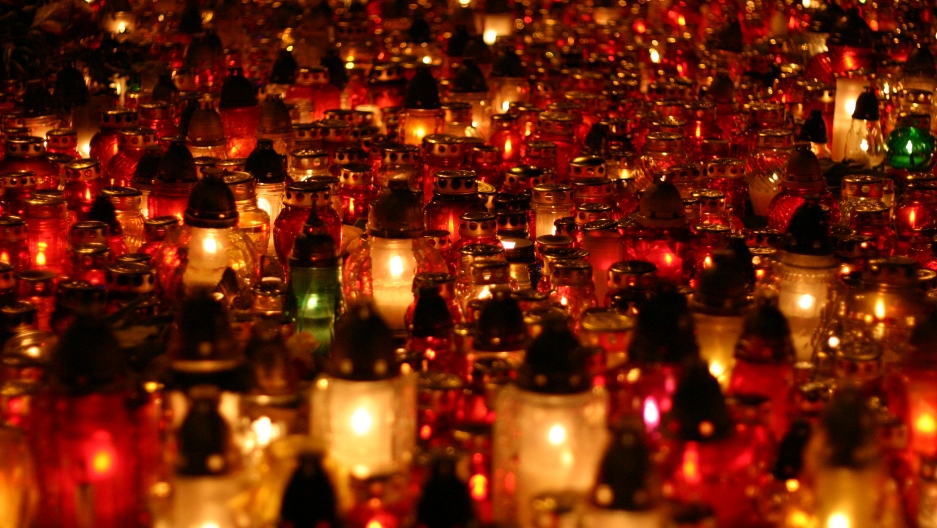 Thousands of candlelights lit in front of Poland's presidential palace in memory of the victims of a fatal plane crash. Warsaw, April 2010.

Mourning varies across cultures. And it's marked by ritual.

Indonesian Torajan families might house and "feed" the body of a deceased relative for months after their death, as their soul makes its way to the afterlife. Swedish burials take place long after death, and close family members wear white ties. In New Orleans, the living honor the dead with emotionally charged jazz funerals.

When Edwidge Danticat's mother died of cancer in 2014, the novelist felt a lack of ritual.

"When my mother's mother died, she went to Haiti to the funeral," Danticat says, "and she came back and she wore black all the time, and then gradually wore lighter colors. There was a mourning period in which you wore black clothes."

But Danticat, the Haitian-American author of "Brother, I'm Dying" and "Claire of the Sea Light," says she wears black on the regular. She couldn't use black clothes to mourn the loss of her mother.

Writing, she says, became her ritual. About four months after her mother's death, Danticat started writing about it, and reading works from other authors who've grieved their loved ones, and some who've even confronted death themselves.

"There was just nothing I felt compelled to write, and then friends started sending me poems and books about grief and mourning," she says. "So I started writing this book as a way of processing my grief, and also because I also had this feeling that I would not be able to write anything else until I had dealt with my grief."

This week Danticat's ritual has been published: Her latest book, "The Art of Death: Writing the Final Story," is not a novel, but a book on the craft of writing — specifically about death.

The book is a rich exploration of how we understand death — "one of life's greatest mysteries" — written in Danticat's curious, enchanting prose. She writes about her mother, who recorded casette tapes for her children when she was sick.

On the tapes, Danticat's mother left instructions for her funeral, down to where in her home to find the dress she should be buried in. But they also contained the hurried declarations of someone nearing death.

Danticat has experience dealing with death: "Brother, I'm Dying" is the story of her father's and uncle's deaths happening on a parallel. And after the 2010 earthquake hit Haiti, Danticat lost relatives in the rubble.

When she went to Haiti then, she brought with her Haruki Murakami's "After the Quake," a collection of stories about people in Japan who are left reeling in the wake of an earthquake. She writes about it in "The Art of Death."

"One of the things that one of the characters says is that 'the Earth has become liquid,'" Danticat says. "And once the Earth becomes liquid, nothing is stable anymore. ... And I think that speaks to a lot about how people experience just death in general. The ground shifts under your feet. Your placing in the world, when it's a parent, feels different."

Danticat says her mother never lost hope for a miracle when she was dying. "She was a person of very strong faith," Danticat says.

But after listening to her mother's casette tapes, she realized how much her mother had accepted her diagnosis.

"I was surprised by how much she'd accepted the fact that she was dying," Danticat says. "Because, you know, you get the diagnosis, the doctor tells you that you're terminal — actually the doctor told her very carefully, but told me more openly that she had maybe three months left. ... I wasn't sure how much of that she accepted."

Danticat says her mother's tapes have something in common with the work of the dying writers in "The Art of Death."

"Dying people, when they write or when they speak — like my mother, even in her casettes — urge us to live," she says. "But many of us in order to live peacefully have to forget that we're dying. But what I've most learned is that death is about living. When we mourn people, we mourn the life that they have lived."

"The Art of Death: Writing the Final Story" by Edwidge Danticat is available now from Greywolf Press.