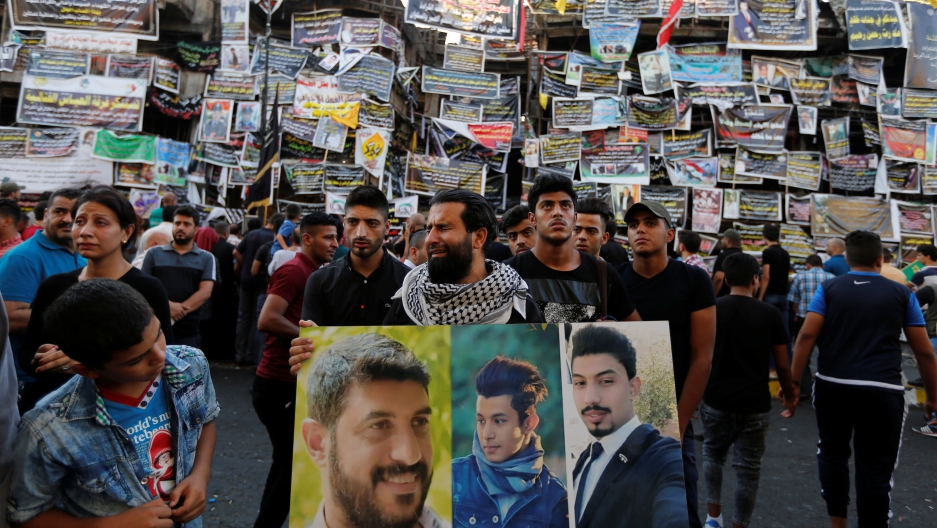 An Iraqi man holds a picture of victims of the Karrada suicide bomb attack in Baghdad, Iraq, on July 10, 2016, one week after the attack.

A year ago, a truck barreled into crowds assembled to watch Bastille Day fireworks in Nice. ISIS claimed responsibility for the attack that killed 86 and wounded 433. But for all the news coverage of the event, it is statistically an outlier — one of only 36 fatal attacks in 2016 in the West. Events like that night a year ago in Nice represent a mere 2.5 percent of all terror attacks.

Worldwide, terror attacks and fatalities fell in 2016 even as other trends rose, according to new data released this month by the Global Terrorism Database. The number of hostages taken, for example, nearly doubled. Seven out of the 10 deadliest terror attacks involved kidnapping and hostage-taking, and in each one, more than 100 victims were abducted and killed.

“Those attacks [in the West] remain the minority, a very small minority of attacks we see,” said Erin Miller, program manager of the Global Terrorism Database (GTD). “Obviously, these major attacks get so much attention, because they’re unusual and they’re newsworthy, and the Middle East blurs into the background.”

EXPLORE OUR INTERACTIVE: What does a day in terror look like?

The GTD is an open-source database of terror incidents around the world maintained by the National Consortium for the Study of Terrorism and Responses to Terrorism (START), a US Department of Homeland Security Center of Excellence located at the University of Maryland. In the database, terror attacks are defined as acts of violence that are intentional and do not include incidents caused by state actors or governments.

In addition, they must include two out of three of the following factors: an economic, social or religious goal; an intended audience that reaches beyond its victims; and a context beyond the scope of legitimate warfare.

The deadliest terror attack in 2016 took place in the Karrada district of Baghdad on July 3, near the end of the holy month of Ramadan. In a shopping center filled with people buying clothes and gifts before the festival of Eid al-Fitr, an ISIS suicide bomber detonated a truck full of explosives, killing 382 and wounding 200 more. (In December, an attack led by ISIS in Palmyra killed 421 total, but 301 of these fatalities were ISIS fighters killed during the battle against Syrian forces. This fits GTD’s qualifications for a terrorist attack, but the Baghdad bombing killed more civilians.)

Sayad Jiyad, a researcher and political analyst at the Al-Bayan Center in Baghdad, was at a nearby hotel watching a soccer match on the night of the bombing. In a blog post, he writes about the price of living in a country where terrorism is a daily threat.

“As we were still discussing the result, we suddenly felt the shockwave of a bomb and the loud sound of an explosion accompanying it, meaning it was nearby,” Jiyad wrote. “Living in Baghdad means you learn to differentiate between a car bomb, a truck bomb, a Grad or Katyusha rocket, a mortar, a grenade, an improvised landmine or IED, a missile, or just a plain sound bomb.”

Mass terror attacks — those killing 50 or more people — are extremely rare, only half a percent of all incidents in 2016. Last year, there were 72 attacks that caused 50 or more fatalities.

Only two — the attack in Nice and the Pulse nightclub shooting in Orlando, where 50 people died — took place in the West. Out of 36 fatal attacks in the West, 70 percent resulted in one death, and in nine out of 26 cases, it was only the terrorist who was killed.

RELATED: Suicide attacks are rare in the West — but part of a growing global trend

And even 75 percent may be an underestimate, according to one expert.

The database systematically excludes events that are uncovered by the media. The GTD counts incidents of terror by processing news articles in English — and relies on translations of foreign media from the Open Source Center, a US Central Intelligence Agency product. This can also be a potential source of Western bias.

“You’re getting very different numbers depending on where you collect the data, and in what language,” said Mia Bloom, a professor of communication at Georgia State University.

Worldwide, 34,623 people died from terror attacks in 2016, but 71 percent of deaths were concentrated in just five countries: Iraq, Afghanistan, Syria, Nigeria and Somalia.

Iraq, the deadliest place in the world for terror, was home to 35 percent of all deaths worldwide, an average of 33 deaths every day. Six out of the top 10 deadliest terror attacks in 2016 took place in Iraq, all of which were orchestrated by ISIS.

Fatalities are only one measure of the impact of terrorism — and don’t account for its total emotional and political reach. In fact, 40 percent of terror attacks result in zero casualties, but those attacks still have an effect.

In 2016, there were 126 bombings set off by Maoists throughout India — 111 of which did not result in fatalities. But they were still used to obstruct political processes and to terrorize local citizens. On April 23, Maoists bombed a school building that was used as a polling station in the Simultala district in northeast India, deterring voters from participating in an upcoming local election.

Abu Sayyaf, a jihadi militant group in the Philippines, gathered political and financial power by taking hostages for profit. Out of a total of 23 kidnappings last year, nine left victims unharmed — but earned the terrorist group $602,775 in ransom.

ISIS, the most active terrorist group in 2016, launched 1,430 attacks in total. A quarter of these incidents were also non-fatal, and 10 percent resulted in one fatality.

Still, whether an attack killed hundreds or injured no one, statistics like the ones you’ll find in the GTD can fail to capture the very human toll of terrorism. After the Karrada bombings, Iraqis tweeted photos and stories of victims in attempts to humanize media coverage of the terror attack. They give you a sense of the trauma behind the numbers.

Behind every death is a unique human being. A beautiful person that is loved and now missed. We are #NotJustANumber pic.twitter.com/iVRcOyMSNt