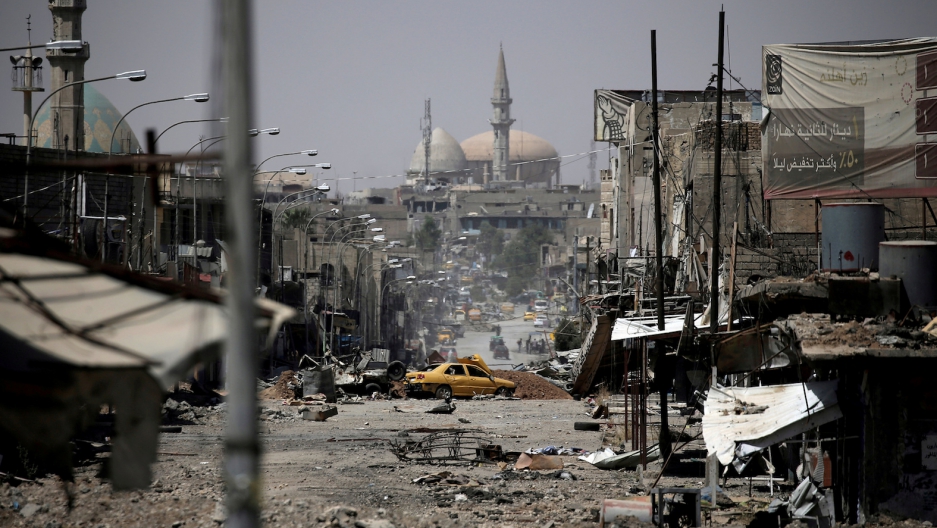 A view of part of western Mosul, Iraq, on May 29. "The mosque in the background would have called the faithful to prayer and it would have been full of different noises: car honks, shop-owners shouting to attract customers, music playing in coffee shops full of people. These everyday sounds had now been replaced by the heavy crump of mortars, artillery, helicopters and the clatter of gun battles. And the memory of a normal day seemed so distant," said Reuters photographer Alkis Konstantinidis.

The true cost of the liberation of the Iraqi city of Mosul is only just beginning to emerge. Those numbers only tell part of the story, as thousands of bodies may still lie under the rubble in the western half of the city, yet to be counted.

Iraqi Prime Minister Haider al-Abadi declared victory over ISIS in the city on Monday, announcing “the end and the failure and the collapse of the terrorist state of falsehood.”

But the next day, Amnesty International accused all sides in the Mosul battle — including the US-led coalition — of potentially committing war crimes.

Could the battle for Mosul have gone any other way? Were civilian casualties inevitable, or could the pain have been lessened?

Amnesty International released a report Tuesday focusing on the fight for western Mosul, a more densely populated area that includes the narrow streets of the Old City.

Titled “At Any Cost,” it says ISIS fighters carried out heinous, intentional atrocities, such as using civilians as human shields and brutally shooting hundreds to death as they tried to flee the city.

It also accuses the Iraqi government and US-led coalition forces of failing to take effective precautions to protect civilians, and of subjecting civilians to “relentless unlawful attacks.”

Coalition airstrikes were carried out by the US, as well as Britain, Belgium, France and Australia. The US and France also supported Iraqi forces with artillery fire.

Amnesty says 5,805 civilians may have been killed by coalition and Iraqi forces in the fight for western Mosul from Feb. 19 to June 19. The rights group cited data from Airwars, an organization that monitors civilian deaths caused by the anti-ISIS coalition.

Airwars has estimated that the foreign coalition alone may have killed as many as 1,200 civilians in the eight-month campaign to free Mosul.

The coalition has conceded responsibility for 484 civilian deaths in Syria and Iraq combined since 2014. It is still investigating dozens of incidents.

The total number is likely to be much higher, and may never be known.

Amnesty said the anti-ISIS coalition “failed to adequately adapt their tactics to these challenges — as required by international humanitarian law.”

While noting that ISIS tactics “created particular challenges for pro-government forces in terms of civilian protection,” Amnesty said that Iraqi government and US-led coalition forces “failed to adequately adapt their tactics to these challenges — as required by international humanitarian law.”

A victim of one of the worst incidents of civilian casualties in Mosul — injured in a US airstrike in the al-Jadidia neighborhood on March 17 that killed more than 100 people — told PRI in March that ISIS fighters rounded her and dozens of others up before the building she was in was totally destroyed by the strike.

“I tried to go outside. Everything was burning. Fire was everywhere. My husband’s family were all killed. I was wiping my face and I was covered in blood. Everyone was covered in blood,” Lina Shahab said from her hospital bed in Erbil, in northern Iraq.

Read more: ‘I saw everything burning’: Iraqi survivors of a suspected US coalition airstrike speak

The US military later said that a 500-pound bomb targeted two ISIS snipers and acknowledged more than 100 people were killed. Local officials say more than 200 died.

This is a pattern that was repeated over and over again, according to the Amnesty report. 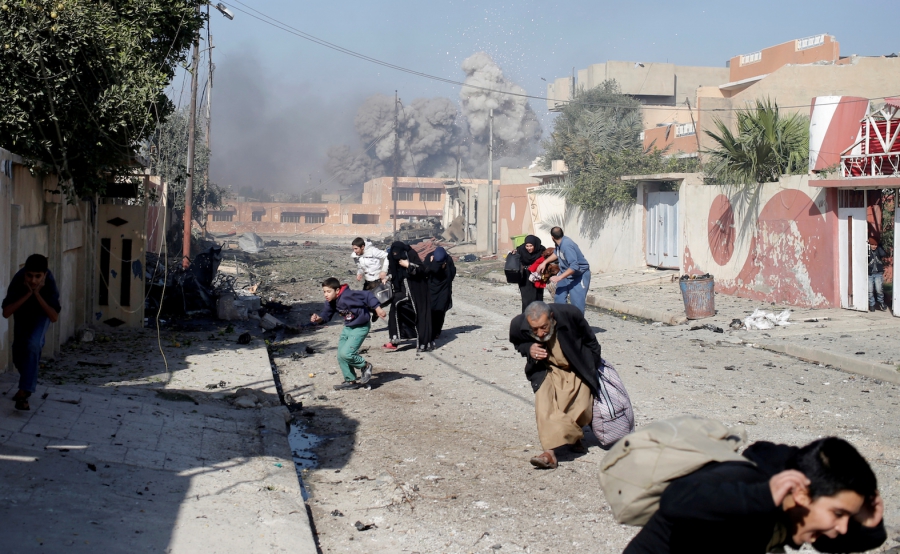 People run in panic after a coalition airstrike hit ISIS positions in the Tahrir neighborhood of Mosul, Iraq, on Nov. 17, 2016. "The fighting comes in waves and when things eventually quietened down, I saw a group of civilians making the most of a break in gunfire to come out onto the streets. They were both young and elderly, and felt safe enough to leave their homes with few belongings, walking carefully but calmly towards where I was standing capturing the scenes around me. Suddenly an airstrike targeted Islamic State positions a few hundred meters away behind them. It was close and total panic ensued. People were screaming, ducking and running away as the plumes of smoke rose nearby," said Reuters photographer Goran Tomasevic.

A reliance on explosives with a wide impact area “wreaked havoc in densely populated west Mosul, where large groups of civilians were trapped in homes or makeshift shelters,” the report said.

“[The Iraqi army and US-led coalition] continued to rely upon imprecise, explosive weapons, ignoring the ever-growing toll of civilian death and injuries.”

‘Mosul was fought with the concern for the local population’

The US-led coalition formed to tackle ISIS has received frequent criticism over civilian casualties since the campaign began in 2014, but it has reacted particularly strongly to the Amnesty report.

Lt. Gen. Stephen Townsend, the top US general in Iraq, rejected the findings.

"I would challenge the people from Amnesty International or anyone else out there who makes these charges to first research their facts and make sure they are speaking from a position of authority," Townsend said.

Col. John Thomas, a spokesman for the coalition, described the fight in Mosul as “unimaginably chaotic and difficult.”

“In order to crush the enemy after three horrific years — an enemy who was entrenched and ready for a suicidal fight to the death, and an enemy who was willing to brutalize and terrorize the very people we were helping to liberate — in order to fight forces like that, force is needed,” he told PRI.

“Mosul was fought with the concern for the local population in every phase,” he added. 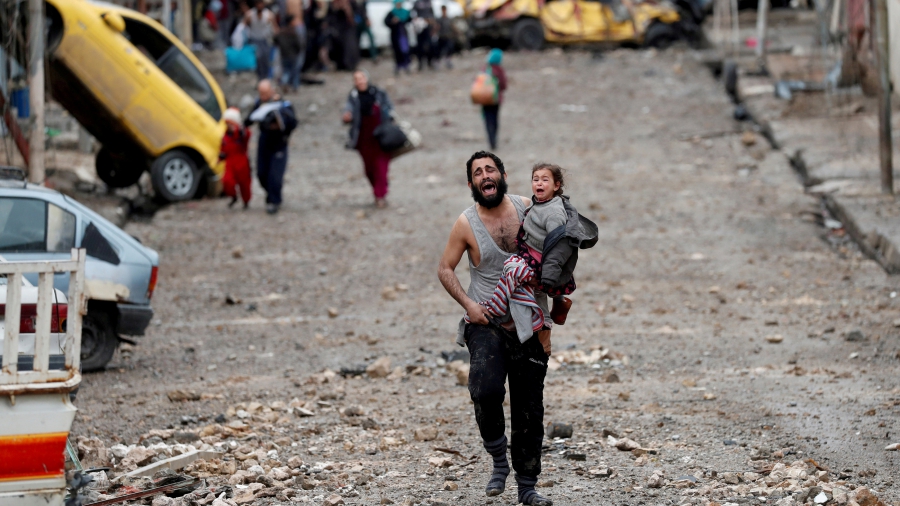 A man cries as he carries his daughter from an ISIS-held part of Mosul toward Iraqi special forces soldiers during a battle for the Iraqi city, on March 4.

The battle for Mosul unfolded in two stages. During the fight to recapture the eastern side of the city, elite counter-terrorism troops — trained and equipped by the US — fought their way through each neighborhood with limited air support. They endured heavy casualties doing so — some 40 percent of their force was killed during the entire battle, according to a US Defense Department estimate — and most of those casualties occurred in the east.

Western Mosul is laid out differently from the east. Narrow alleyways, small streets and densely packed neighborhoods made the battle much more difficult for Iraqi troops, who were already reeling from their losses.

That geography “limited what Iraqi forces were able to do on the ground and led to greater reliance on air power from above,” Chris Woods, director of Airwars, told PRI. “There was a conscious transferal of risk. It’s a terrible choice for the military, particularly when fighting for territory where lots of civilians are present.”

Calling in coalition airstrikes became simpler and faster for Iraq commanders after a change of the rules of engagement last December. The change was implemented partly as a result of the losses Iraqi forces suffered in the east.

Airwars reported an increase in airstrikes of 55 percent from April to May, when the battle for western Mosul was in full swing.

“The coalition talks about this being the most precise campaign in history, but this isn’t about precision, this isn’t about where weapons are going to go, it’s about the effect when they get there,” Woods said. “There were lots of instances of people trapped in the city and taking shelter in houses, so it’s difficult for the coalition to know whether there were civilians there or not. It made it difficult for them to use discriminate force, and to be proportionate.”

“It was a very bloody fight with almost impossible choices for the Iraqi military,” he added.

A combination of the area being densely packed, with fewer escape routes, and a greater number of airstrikes led to a dramatic rise in the number of civilian casualties.

Some who know the city well saw it coming. As casualties rose, Rasha Al Aqeedi, a Mosul native and fellow at the Al-Mesbar Studies and Research Center in Dubai, tweeted some insight into the nature of the task soldiers faced in the city’s narrow streets.

“West Mosul's architecture makes a street to street fight impossible” she wrote. “Implying the forces could do better at protecting civilians is unfair to Iraq and the coalition.”

Dylan O’Driscoll, an Iraq analyst and researcher at the Humanitarian and Conflict Response Institute at the University of Manchester, said the battle for western Mosul “was always going to be more difficult” than it was to defeat ISIS in the eastern district.

“A pilot can tell the difference between an egg and a tennis ball. So we don’t know why it happened.”

“Although the destruction and casualties were high, the Sunnis I have spoken to were mainly thankful for the liberation from ISIS,” he told PRI. “The key now is to maintain Sunni support and this can only be done through a thorough plan for reconstruction and a political plan for the future of Iraq that engages with all sections of the society.”

But despite the stated best intentions of those liberating the city, the carnage caused by the battle clearly left a mark on those who endured it.

“We know that a pilot can tell the difference between an egg and a tennis ball. So we don’t know why it happened,” said Ziad Sleiman, a 35-year-old swimming instructor from western Mosul who was at the scene of the March 17 US airstrike that killed more than 100 people.

Speaking at a hospital in Erbil, he added, “Americans and Iraqis say they came to save people. But we are seeing something different. We are like the wheat between the millstones. They are killing us.”