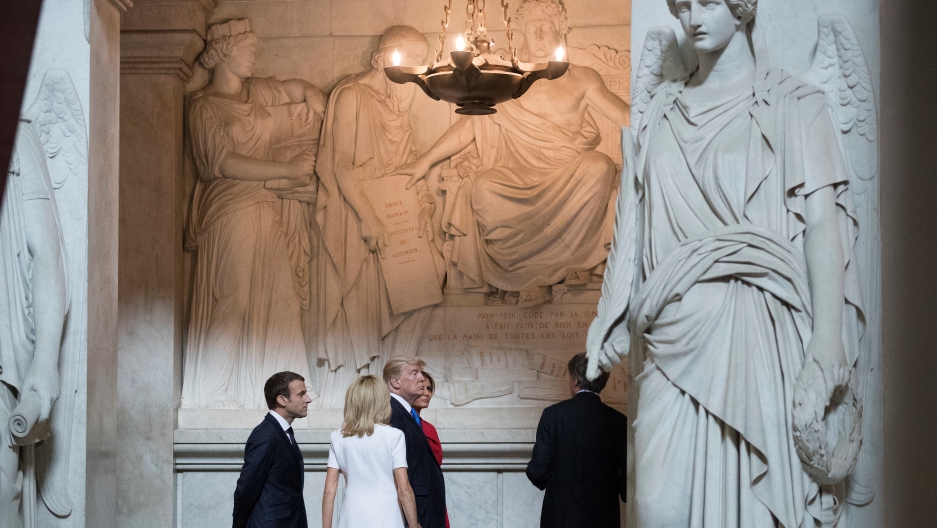 The itinerary for President Donald Trump's trip to Paris is packed with enough grandeur to satisfy even a former pageant king: the Élysée Palace with its huge crystal chandeliers and soaring ceilings, Napoleon's gilded tomb and a pricey dinner at the Alain Ducasse restaurant on the second floor of the Eiffel Tower.

But the highlight? It will no doubt be the military parade along the Champs-Élysées to commemorate Bastille Day.

"We all know that Trump likes a military parade and apparently wanted one for his own inauguration," says reporter Adeline Sire. "So in a way, he'll be treated to what he likes best."

The Washington Post reports that Trump wasn't planning to attend France's Bastille Day at all, until he learned there would be a military parade complete with fighter jets, horses and military equipment.

In any case, it will be a nice respite for Trump from the mess at home, where his son, Donald Trump Jr., has been fielding questions about why he met with a Russian lawyer during the 2016 presidential campaign.

But if the president hoped he could sidestep Russia on his Parisian sojourn, he was mistaken.

At a press conference with French President Emanuel Macron on Thursday, a reporter asked about Donald Jr. President Trump defended his son.

"My son is a wonderful young man who took a meeting with a Russian lawyer — not a Russian government lawyer but a Russian lawyer," Trump said. "Most people would have taken that meeting. It is called opposition research ... that is very standard in politics."

In the end, even though Trump couldn't escape what he calls "this Russia thing," Sire is convinced the scandal won't completely rain on the president's parade. So to speak.

"I think all around he's going to have a pretty good time in France," Sire says. "And he already said at the press conference, 'You have a beautiful, peaceful city. And I'm coming back.'"