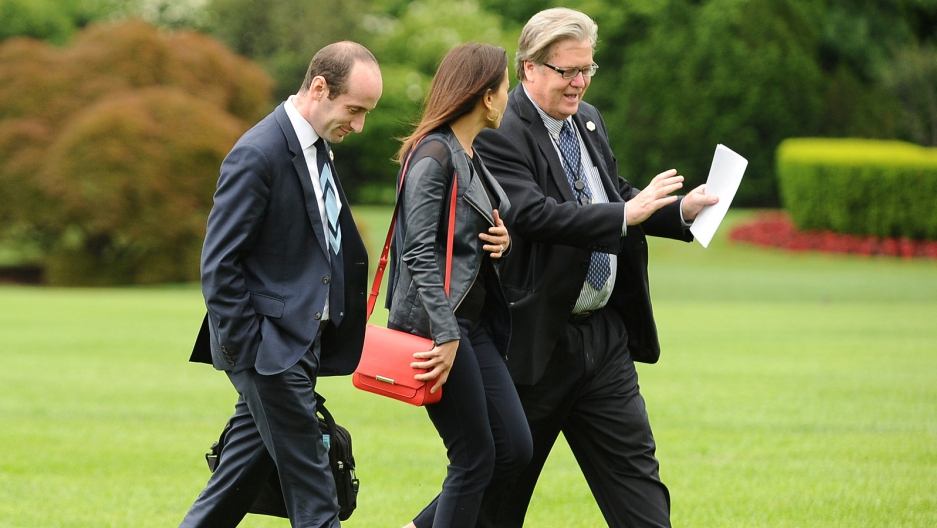 Stephen Miller, senior adviser to the president, Dina Powell, deputy national security adviser for strategy, and Steve Bannon, White House chief strategist, arrive from Andrew's Air Force Base aboard Marine One on the South Lawn at the White House in Washington on May 13, 2017.

Instead of disclosing the creditors for the four home loans he reported, Bannon simply wrote "HOME LOAN" on each line of the form. Bannon’s form was the only one of more than 400 forms filed by Trump administration appointees — and reviewed by the Center for Public Integrity and Reveal — that did not specifically list the creditors.

The reason mortgages and creditors are disclosed is to ensure that government officials and those entering government are paying market interest rates for their loans, and not receiving preferential treatment from creditors on the terms.

"What's most significant to me about this situation is that the chief ethics officers at the White House signed off on [Bannon's forms]," said Kathleen Clark, a professor of law at Washington University in St. Louis and an expert on government ethics.

"Individuals make mistakes. The real story is how shoddy the ethics process is in the White House," Clark said. "This raises an important question about the quality of the work that's being done, and how careful these White House ethics officers are."

The absence of such basic information on Bannon's financial disclosure appears inconsistent with the sworn statement Bannon made when submitting his documents. In it, Bannon had pledged the disclosure’s contents were "true, complete and correct to the best of my knowledge."

Bannon, one of Trump’s most influential and controversial advisers, signed his financial disclosure on March 30. The following day, White House ethics lawyers Stefan Passantino and James Schultz both independently certified that Bannon's disclosures were complete, despite the missing information. The White House then transmitted the 12-page disclosure form to the Office of Government Ethics.

Bannon’s omissions were first spotted by volunteers for #CitizenSleuth, a project launched Friday by the Center for Public Integrity and Reveal from the Center for Investigative Reporting. The crowdsourced investigation is examining the detailed financial disclosures from more than 400 Trump administration officials.

Bannon declined to comment on his filings. White House press officials declined to discuss the matter on the record.

In response to questions from the Center for Public Integrity, a White House official with knowledge of Bannon's filings said that the lender for the first three mystery mortgages listed — HOME LOAN #1, HOME LOAN #2 and HOME LOAN #3 — was Chase Home Loans. The creditor for HOME LOAN #4 is Quicken Loans.

As for why this information was not properly disclosed at the outset, the official, who was not authorized to speak with reporters, said there had been "a mistake," and that Bannon's disclosure forms are currently being amended. The official did not elaborate.

For government ethics experts, Bannon's incomplete filing is only the latest example of what they consider the Trump’s administration's lax attitude toward executive branch ethics and potential conflicts of interest.

The discovery of Bannon's incomplete ethics forms came less than a week after Walter Shaub, the director of the Office of Government Ethics, announced his resignation. Shaub will now join the Campaign Legal Center, a nonpartisan election reform organization.

Shaub had frequently sparred with the Trump administration, most recently over Trump’s decision in May to retroactively grant ethics waivers to a slew of senior administration officials.

This decision freed some Trump officials to ignore rules that prohibit White House employees from interacting with their former employers, who in some cases spend significant money attempting to influence federal policy.

President Barack Obama also granted ethics waivers during his administration, but Trump has been more prolific in doing so.

One of those Trump ethics waivers appeared to be specifically designed to retroactively protect Bannon, who has reportedly been in contact with his former employer, Breitbart News, since joining the Trump administration.

The White House press office did not respond to questions about Bannon’s financial disclosure forms. But Alexandra Preate, a veteran Republican public relations strategist, called the Center for Public Integrity on Bannon’s behalf. Preate has previously represented Bannon and Breitbart News and does not work for the White House. She also refused to speak on the record about Bannon’s financial disclosure.

In an effort to understand Bannon’s mortgage debt, the Center for Public Integrity reviewed property deeds and real estate records to piece together details of Bannon's four misreported loans. Taken together, the loans total $2,012,500 and span more than a decade, according to those records.

Bannon obtained two of these loans by borrowing against the value of real estate he already owned. It’s unclear what Bannon, whose business ventures have ranged from real estate to movie production, ultimately used this borrowed money for. The other two misreported debts were connected to the purchase of properties.

Starting in 2002, Bannon borrowed $382,500 from GreenPoint Financial in the form of a 30-year adjustable rate mortgage, or ARM. The 3.125 percent interest rate he reported in his disclosure in March of this year represents the current rate he pays, which is significantly lower than his initial 6.62 percent rate.

A few years later, Bannon borrowed $905,000, using another ARM from GreenPoint, this time borrowing against his home in Laguna Beach, California.

In 2006, Bannon again borrowed against his Laguna Beach house, this time taking out a $500,000 home equity line of credit from Washington Mutual.

When Washington Mutual collapsed during the subprime mortgage crisis of 2008, Bannon's mortgages were among the millions of home loans transferred to JPMorgan Chase, which paid pennies on the dollar for the debt.

In 2015, as Trump's nascent presidential campaign was heating up, Bannon borrowed $382,500 from Quicken Loans against the value of a North Carolina golf condo, also using a 30-year ARM. Bannon reported the interest rate on that loan as 4.125 percent.

Despite his property holdings, Bannon lived a largely transient lifestyle during the decade before he became the Trump campaign’s chief executive, bouncing between New York; Washington, DC; Florida and California. This raised questions about what state he was legally registered to vote in.

Bannon also once suggested that only property owners should be able to vote in US elections.

The Center for Public Integrity is a non-partisan, Washington, DC-based news organization dedicated to producing original investigative journalism on issues of public concern.