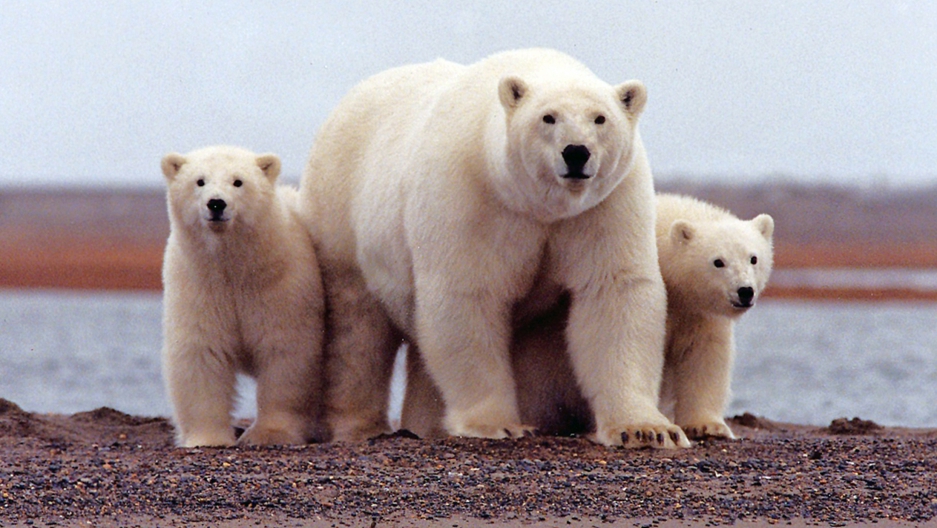 A polar bear keeps close to her young along the Beaufort Sea coast in Arctic National Wildlife Refuge, Alaska, March 6, 2007.

Buzz over the Chukchi Sea in a helicopter in early spring, and there’s little to see but sky and ice. That is, until your eye catches the maze of polar bear tracks threading across the ice in some areas. The sea, which stretches between northwestern Alaska and northeastern Russia, is home to one of the Arctic’s 19 distinct polar bear populations.

“When you’re out there and you see all these tracks — it feels like there’s a bear party going on, and you just haven’t been invited to it,” says video producer Luke Groskin. He recently made the trip with Karyn Rode, a wildlife biologist at the US Geological Survey, to film her work with the bears for Science Friday.

But as the Arctic continues to warm twice as fast as the rest of the world, the sea’s ice cover is growing fragile — breaking up earlier in the year and melting more thoroughly. Rode says that for polar bears, which spend the majority of the year hunting seals and other prey on the ice, shrinking habitats like the Chukchi Sea are already having an effect.

“There is variability, but some of the general responses across populations are increased land use,” she explains. “So there are more bears coming on shore than have in the past, and staying there longer. And when they’re on shore, they typically are losing weight, because they are eating minimally or not eating at all.”

Each year, Rode and her team head out to study the bears, gathering information about their health in a changing climate. The first challenge? Spotting white bears on the snow-covered ice. Most of the time, the team relies on finding and following the freshest-looking tracks. “It’s very hard to just see a polar bear itself,” Rode says.

When the researchers spot a bear, they tranquilize it from the helicopter, then land and make sure the bear is comfortable. Then, they take samples of everything from the bear’s blood to its hair, even a small fat biopsy — all of which can give clues about the bear’s diet, among other factors.

“One of the primary mechanisms in which we think polar bears are affected by sea ice loss is that they have to have the sea ice to access their primary prey, which are ice-associated seals,” Rode explains. “Polar bears have a very specialized diet — typically, 70 percent of their diet is composed of one or two seal species. And so when there’s less ice, you have less of a platform to hunt for seals.”

Rode’s research shows that for the moment, bears in the Chukchi Sea are doing all right. The sea is shallow, she explains in the video, and a good habitat for top prey like walruses and bearded seals. “The Chukchi Sea bears, so far, comparing condition and cub survival since the 1980s to the current data we’re collecting, suggests that the bears there have stayed in pretty good condition,” she says.

In that way, they're the lucky ones.

Polar bears in the nearby Beaufort Sea, north of Alaska, have also faced significant ice loss, and are showing signs of stress. “That population has experienced declines in body condition, cub survival, and recently, there’s been a pretty significant population decline,” Rode says.

As Rode points out in the video, sea ice isn’t the sole determinant of polar bears’ health. “They have to have prey,” she says. “But there’s no doubt that if you have substantial reduction in sea ice, that they have lost the area over which they can hunt.”