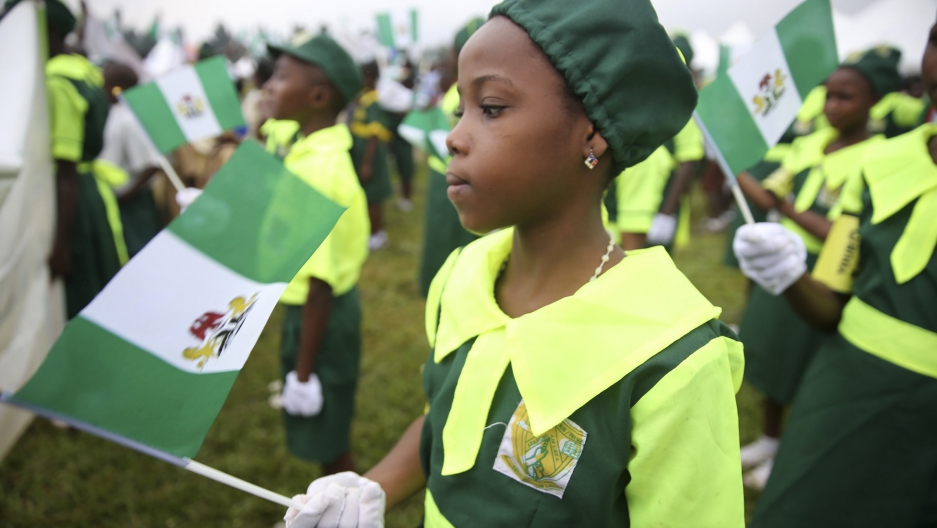 A school girl holds a Nigerian flag as she joins a parade marking Nigeria's 54th Independence Day in Lagos October 1, 2014.

When their mother was well and in their home in Lagos, Nigeria, 15-year old twins Kehinde and Taiwo Oni thought that they, like their mom, would finish secondary school.

But when she had to return to her old village due to a chronic illness, money grew tight. Gbenga, the girls’ father, lost his job as a mechanic last year.  This year, instead of school, each morning the twins drag an engine out of their father’s hut and into the yard, where they spend 12 hours grinding dried peppers for customers, earning $1.50-$2.50 a day.

Their father relies on the twins to support the household, including their younger sisters and brothers. “I don’t want to do this kind of job when I grow up” says Kehinde. “The job is stressful and the money you get from it is not too much.”

Kehinde and Taiwo are among 10.5 million children in Nigeria who are not in primary school — no country in the world has more children out of school. That fact is all the more shocking given that Nigeria is the richest country in Africa.

Despite the financial hardship, their father is reluctant to return to work. He's taken a position with the church instead. “I could only work part time”, he says. "I [would] have to split my time, you understand. I have to think about the church.”

Gbenga himself never completed primary school — instead he followed his father, a pastor, on religious missions. According to experts, uneducated parents in slum communities are less likely to ensure that their children finish high school — all the more so with girls.

“What I like is everybody get an education before they get married. ... I prefer everybody to go to school to be able to speak [and] to write,” said Gbenga.

“If I have a chance to go to school now I will be very, very happy because I would like to go to the library to read many storybooks. And I would like to write notes — I have missed writing notes — and I will solve many maths,” gushed Taiwo.

Often in Nigeria, there are no public schools close to slum communities. Parents are forced to send children to private schools, which are common in low-income neighborhoods. Extortion by school leaders often adds to the burden; many families struggle to pay both the direct and indirect costs of their children’s education. Moreover, in a country where so many graduates remain unemployed, it takes an additional leap of faith for cash-strapped families to invest in education.

“The headmaster [was] standing at the gate. [He] sent us back, that we should bring money for our school fees. I felt very ashamed and wished I had not gone to school that day,” said Kehinde, recalling being turned away at the local private school as she looked over hands stained with red pepper flour.

On a Sunday morning in Lagos, dust covered cars navigated the crater-sized scars in the dirt road. Children skipped along behind their parents, making their way to the local church in brightly colored traditional prints. A small group of street preachers, bibles in tow, began to counsel a man loitering near the square with a bottle of local gin.

Taiwo and Kehinde, preparing for the Sunday service, basked in the sermon melodies coming from the blown out speakers of the Celestial Church of Christ next door. The girls stood behind a curtain in their living room, adjusting their white hats in front of a stained mirror. They pulled on ankle-length cotton dresses before helping their 14-year-old sister Idowu and 10-year-old brother Michael with their white gowns.

After service the twins prepared lunch, boiling rice on a small stove by the side of the street, the overpowering smell of kerosene filling the air. The food was ready just in time, as the rainy season downpour began to pound the tin roof of their cramped living room. The children sat packed together on a worn out sofa, hungrily eating the small mountains of orange rice heaped on their plates.

When the rain subsided, the twins returned to their small stall on the main road where they grind peppers. Monday to Friday, the twins attend to customers from 8:30 a.m. until 9 p.m. at night. Saturdays and Sundays are their busiest days.

As they wait for business, they sketch cartoon characters on lined notebooks, drawing the figures in vivid color.

Sitting on a sheltered wooden bench on the side of the street, the girls are a lifetime away from their dreams. Kehinde wants to be nurse to help people who are sick, while Taiwo, a lover of mathematics, aspires to work in a bank.

Gbenga is not alone in his dismissive attitude toward girls’ education. Some 60 percent of children not in school are girls, according to the UN.

“They tend to compromise the future productivity of these children and prioritize income,” said Ayo Fajemibola, a social worker at Action Health, an organization focused on responding to the needs of Nigeria’s young. The economic pressures of poverty take a heavier toll on girls than boys, he adds.

“When you wake up in the morning, you see many of the grown up girls at home — they are not going to school. ... You'll see Aunty Sikira there selling corn,” said Fajemibola. She is hopeful that the government, working with the community, can help girls find role models and show families the value of education.

Gbenga has decided not to seek paid work. He had a vision prompting him to become “a man of God," he said. With no significant income, he was unable to keep up with the $70 a term school fees for the twins.

“If I can ask God for one thing, I’ll ask God to help me or help me to provide money for my parents to send me back to school,” said Taiwo.

This report was supported with funding by the Fuller Project for International Reporting and by The Malala Fund.