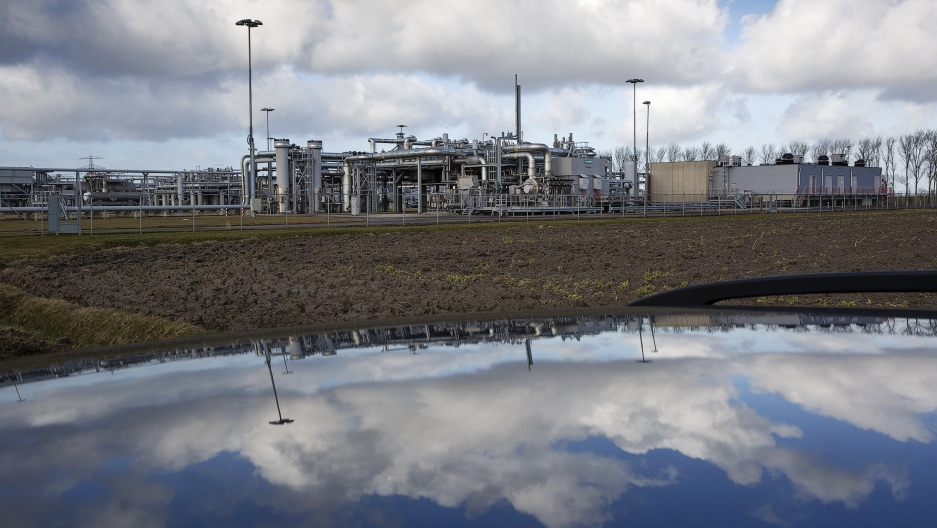 A view of a gas production plant is reflected in the roof of a car in 't Zand in Groningen February 24, 2015. A damning report from the independent Dutch Safety Board accused the government and the field's operators, Royal Dutch Shell and Exxon Mobil Corp, of ignoring the threat of earthquakes linked to the massive Groningen gas field for years.

Angry Dutch residents dragged the government to the country's highest court Thursday over gas extraction in Europe's largest gas field, which has triggered damaging tremors in the area for years.

Residents in the northern Groningen province and environmental groups are asking the Council of State to rule in favor of a complete shutdown of the Groningen gas field, which currently produces some 21.6 billion cubic meters per year.

Over the past two years, the Netherlands has drastically scaled back gas production from about 42.5 billion cubic meters in 2015.

The move comes as the northern region has experienced a slew of minor tremors due to the collapse of empty underground pockets, which have frightened residents and damaged homes, farms and historical buildings.

Although the quakes are of low magnitude, they often happen close to the surface.

Van der Sluijs said a three-judge bench heard arguments from the plaintiffs about why the gas field should be shut down, as well as from the NAM, the energy company responsible for the gas extraction.

NAM, which is half-owned by Shell and ExxonMobil, has been extracting gas from the massive Groningen field since 1963 and has asked the government for more clarity over its constant changes in levels of gas extraction, she said.

"We've landed ourselves in a situation which is to the benefit of no-one," NAM director Gerald Schotman was quoted by the NOS public broadcaster as saying.

Residents however accused the NAM of "not putting our safety but their profits first," Socialist Party (SP) provincial politician Eelco Eikenaar told the RTV Noord broadcaster.

The hearing continues Friday and a decision is expected within a few months, Van der Sluijs said.

In April, a separate court in Arnhem-Leeuwarden ordered public prosecutors to investigate whether the NAM was criminally responsible for the quakes.