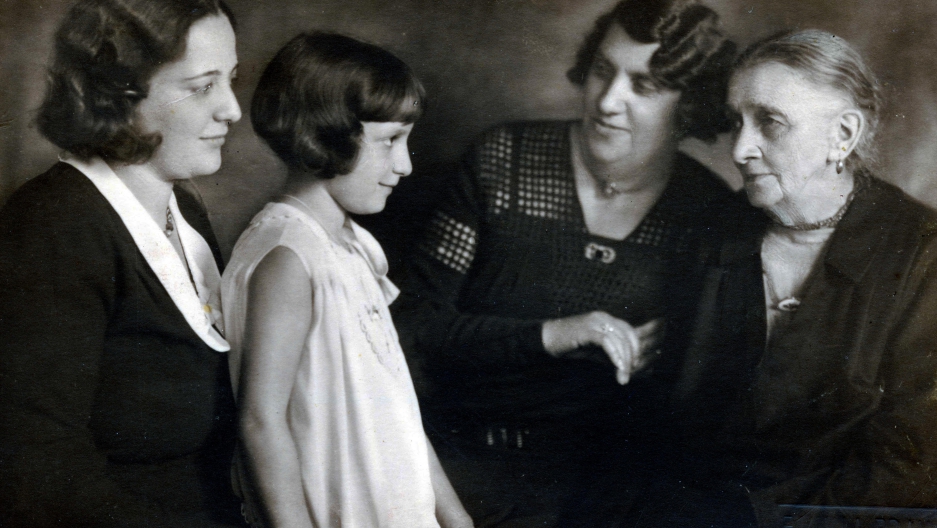 Hana, as a young girl in Prague, is surrounded by her mother, grandmother and great grandmother. Hana is the only woman in this picture who survived World War II.

Nearly a decade ago, I began a search for a family story that is most often relegated to history books — the journey of a World War II refugee. I was captivated by my maternal grandmother’s search for home and felt certain that her unique narrative was far more relevant than had been recognized throughout my childhood.

Hana, my grandmother, was a child refugee from Prague and the only Holocaust survivor in her family. Her parents sent her away from danger at the age of 14 and unsung heroes provided her with the tools to be resilient. When she immigrated to America in 1950, she was a woman formed by war.

In 2009, I sat on the edge of her deathbed and asked to hear her story. I was a budding journalist and most interested in how her years of statelessness trickled down into the identity of her descendants. When she passed away a year later, I discovered a wealth of archive material and began to categorize, digitize and internalize her details, seeking to create a travel log of her displacement.

Five years of research later, I set out to retrace the route that led her to America. 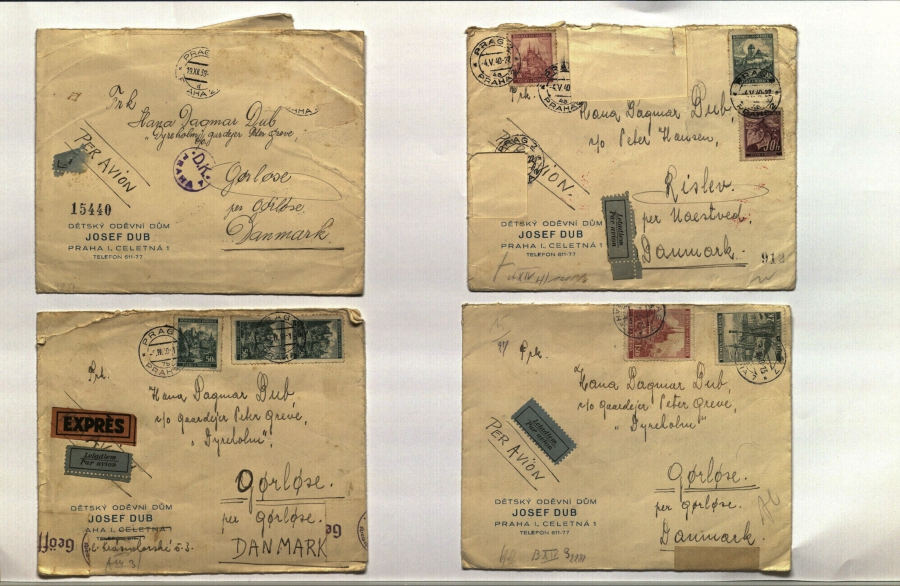 Scans of letters Hana exchanged with her parents from Denmark to Czechoslovakia in the early years of World War II. Hana's parents were deported to extermination camps in 1942.

The sentiment in Czechoslovakia leading up to World War II was ‘it could never happen here.’ But, as anti-Semitism continued to rise in Europe, Hana’s father, like many Jews, sought a way out of the country. Only Hana escaped; she was sent to a farm in rural Denmark.

By the summer of 1941, just before her 16th birthday, Hana moved in with her third foster family — newlyweds Jensine and Arne Nygaard. They lived on a modest farm just outside of Naestved, Denmark, and had recently given birth to the first of five children.

Some 74 years later, I found one of their granddaughters. Sine, named after her grandmother, and her husband Torsten, along with their three children, live on a farm in Mern, Denmark, a small village about an hour from Copenhagen. It was February 2015 when I first met them and since then, Sine and I, along with our extended families, have become entwined in each other’s lives. 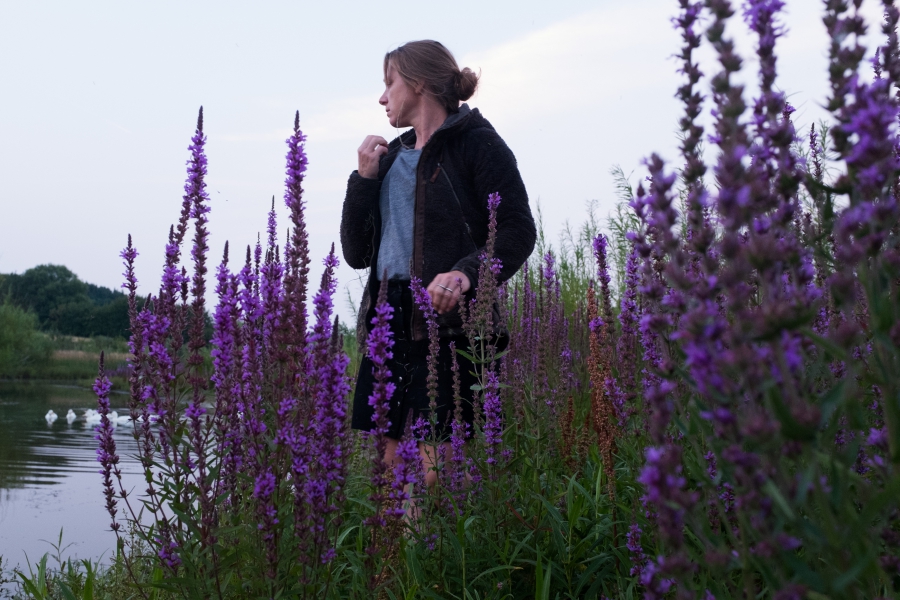 Sine, the granddaughter of Hana's foster mother from World War II, on her farm in Mern, Denmark.

As if an older sister, I talked to her about Sergiusz, my then-fiancé, and his life in Poland. I explained how his family provided me with a European identity that had been washed away by two generations of assimilation in America.

Our early conversations were held against the backdrop of the refugee crisis that was beginning to take over the Danish and Swedish airwaves. Two generations after my family was a victim of genocide in Europe, I traveled freely around the Schengen Area, a zone that was almost free of passport checks at the time. And yet, here we were observing headlines eerily similar to those that forced my grandmother to flee.

Something began to shift in that time. The themes I found most important in grandmother’s history began to be a part of my present-day travels.

Later that year, I stood on the Baltic Coast in Beddingestrand, Sweden, the exact place where an illegal fishing boat carrying my grandmother arrived safely in October 1943. And it is near this shoreline that I recently met a household of young refugees from North Africa and the Middle East who live in the same quarters where my grandmother once found refuge.

A self-portrait in Beddingestrand, Sweden. This is the exact place where an illegal fishing boat carrying Rachael's grandmother and 18 other refugees arrived to the safe shores of Sweden after fleeing Denmark and being lost at sea for nearly a day.

When I began researching my grandmother’s displacement, I knew the preservation of her narrative was important, but I wouldn’t have considered it timely. It is in these past few years that I have seen politics shift her survival story from a redemptive tale of post-war peace to a forewarning.

The refugee crisis has become an increasingly dire situation. According to the United Nations refugee agency, UNHCR, there are over 65 million people displaced worldwide today. Fifty-five percent of the over 22 million refugees come from South Sudan, Afghanistan and Syria alone. There are more than 10 million stateless people who are being denied a nationality, a similar reality to what my grandmother faced for nearly 20 years of her life. These numbers have created a trend in politics reminiscent of the interwar period in Europe.

In 2016, we saw the vote for Brexit in Great Britain and the election of Donald Trump in the United States. Both led to an increase in hate crimes. The Southern Poverty Law Center reported over 900 reports of harassment and intimidation in the first 10 days after the election of Trump. In Scandinavia, a part of the world recognized for its positive treatment of refugees during World War II, there has been increased support of the Danish People’s Party and the Sweden Democrats, both known as anti-immigrant parties.

Last week, President Trump visited Poland and affirmed its increasingly nationalistic approach to politics. Since the election of President Andrzej Duda in 2015, Poland has been isolating itself from the values of the European Union and rejected the EU’s proposed plan to redistribute asylum-seekers. 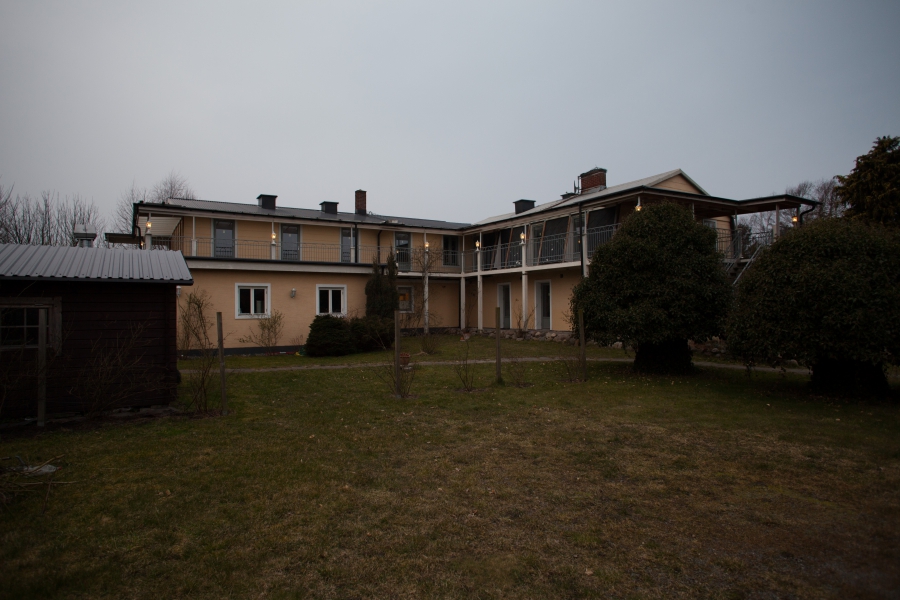 This former B&B in Beddingestrand, Sweden is now home for unaccompanied refugees from North Africa and the Middle East. It is the same home where Hana slept upon arriving to Sweden as a refugee in 1943.

In the lead-up to Trump’s election win, Sergiusz, who had recently immigrated to the United States, would often explain Polish politics to Americans by saying, “In Poland, we voted in our Trump.”

In 2016, Sergiusz and I hosted a wedding celebration on Sine’s farm in Denmark. It was the coming together of three families — Lutheran Danes, Catholic Poles and American Jews. In our purpose-driven perspective, we found harmony and a connectedness in weaving together our family stories, a pushback against a world that once told us to fear each other. 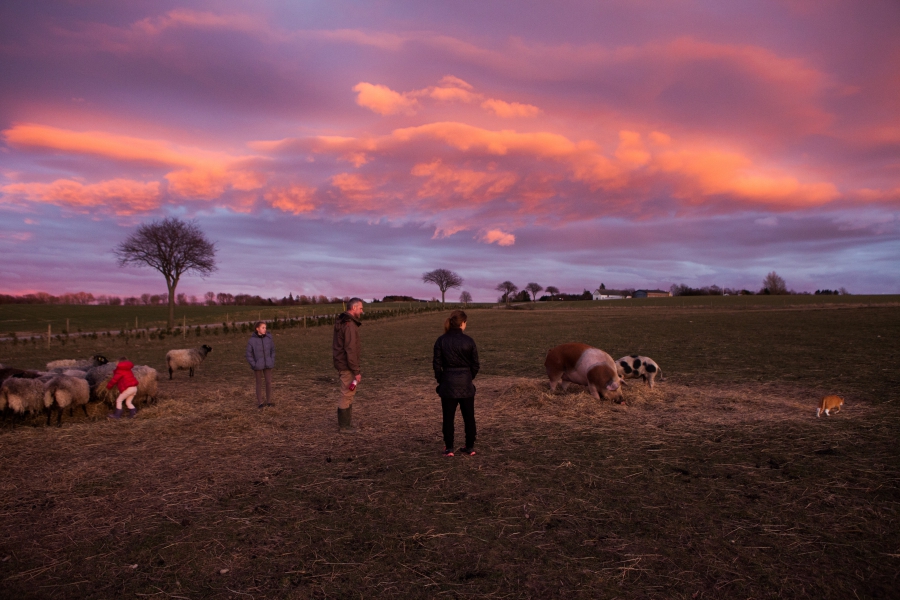 Sine, the granddaughter of Jensine (Hana's foster mother from World War II), watches the sunset from her farm with her husband, Torsten, and their children in Mern, Denmark.

One month after the party, Sergiusz suddenly collapsed and died in our bedroom in Boston. Everything changed that day. I never slept in my home again and soon found myself writing chapters of a book about displacement from basement bedrooms and train stations instead of from the comfort of my own home, my husband by my side. I had spent seven years trying to deeply understand and respectfully tell this story of loss and resilience and now faced grief as a narrator.

A survivor’s story never ends. For my grandmother, the emotional and mental challenges of displacement were still present, even after she received her American citizenship in 1956. Like so many today, she lost her support system and was robbed of her youth; she created a life by herself in America, a country that refused her family in 1939, resulting in their deportation in 1942. Her story doesn’t belong in the past tense, but rather at the forefront of our history books.

Rachael Cerrotti is continuing the documentation of her grandmother's journey on "Follow my Footprints."