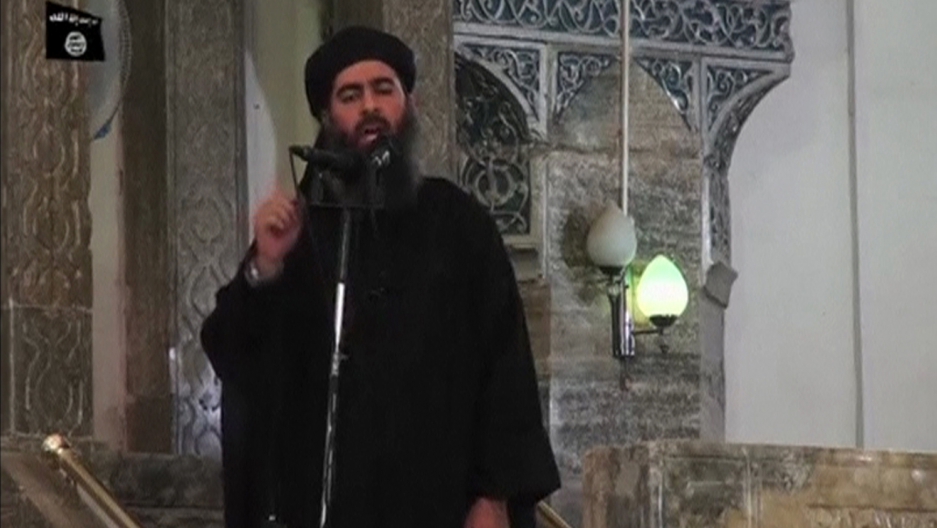 Abu Bakr al-Baghdadi, the leader of ISIS, made what would be his first public appearance at a mosque in the center of Iraq's second city, Mosul, according to a video recording posted on the internet on July 5, 2014, in this still image taken from video.
Credit:

Islamic State group chief Abu Bakr al-Baghdadi was reported dead on Tuesday, a day after Iraq declared it had driven the jihadists from their one-time biggest stronghold of Mosul.

The Syrian Observatory for Human Rights, a longtime monitor of the country's conflict, said it had information from top ISIS leaders confirming Baghdadi's death.

The report could not be independently verified and Baghdadi has been reported dead several times. The Pentagon said it has no information to corroborate the reports of his death.

But if confirmed, his death would mark another devastating blow to the jihadist group after its loss of Mosul, which Iraqi Prime Minister Haider al-Abadi said Monday had been retaken from ISIS after a grueling months-long campaign.

"Top tier commanders from IS who are present in Deir Ezzor province have confirmed the death of Abu Bakr al-Baghdadi, emir of the Islamic State group, to the Observatory," the monitoring group's director Rami Abdel Rahman told AFP.

"We learned of it today but we do not know when he died or how."

Deir Ezzor, in eastern Syria, remains largely under ISIS control even as the group is losing territory elsewhere in the country and in neighboring Iraq.

Abdel Rahman said Baghdadi "was present in eastern parts of Deir Ezzor province" in recent months, but it was unclear if he died in the area or elsewhere.

There was no official confirmation or denial of the news on social media platforms used by ISIS.

The US-led coalition said it could not verify the Observatory's information.

"We cannot confirm this report, but hope it is true," said coalition spokesman Colonel Ryan Dillon.

"We strongly advise ISIS to implement a strong line of succession, it will be needed," he added, using a different acronym for ISIS.

There have been persistent rumors of Baghdadi's death in recent months, and Russia's army said in mid-June that it was seeking to verify whether it had killed the ISIS chief in a May air strike in Syria.

The US-led coalition fighting the jihadist group in Syria and Iraq said at the time it could not confirm whether the Russian strike had killed Baghdadi.

With a $25 million US bounty on his head, Baghdadi has kept a low profile and was rumored to move regularly throughout ISIS-held territory in the area straddling Iraq and Syria.

The 46-year-old Iraqi-born leader of ISIS has not been seen in public since making his only known public appearance as "caliph" in 2014 at the Grand Mosque of Al-Nuri in Mosul.

ISIS destroyed the highly symbolic site before Iraqi forces could reach it as they pushed the jihadist group from Mosul.

Iraqi forces launched their campaign in October to retake Mosul, which was seized by the jihadists during the mid-2014 offensive that saw them take control of large parts of Iraq and Syria.

Abadi announced in Mosul on Monday that the campaign had ended with the defeat of ISIS in the city, hailing "a victory over darkness, a victory over brutality and terrorism."

The cost of victory has been enormous: much of Mosul in ruins, thousands dead and wounded and nearly half the city's population forced from their homes.

In Mosul's Old City, where buildings lie in ruins and burned-out cars and other debris choke the streets, security forces were still searching for remaining ISIS fighters.

"What we are doing today is just combing the area and clearing it of sleeper cells," Staff Lieutenant General Sami al-Aridhi, a senior commander in Iraq's elite Counter-Terrorism Service (CTS), said Tuesday.

"There are groups that are hiding in shelters," but they surrender or are killed, Aridhi said.

Since the Mosul operation began in October, 920,000 people have fled their homes, only a fraction of whom have returned, according to the United Nations.

By AFP's Maya Gebeily in Beirut, with Tony Gamal-Gabriel in Erbil, Iraq.