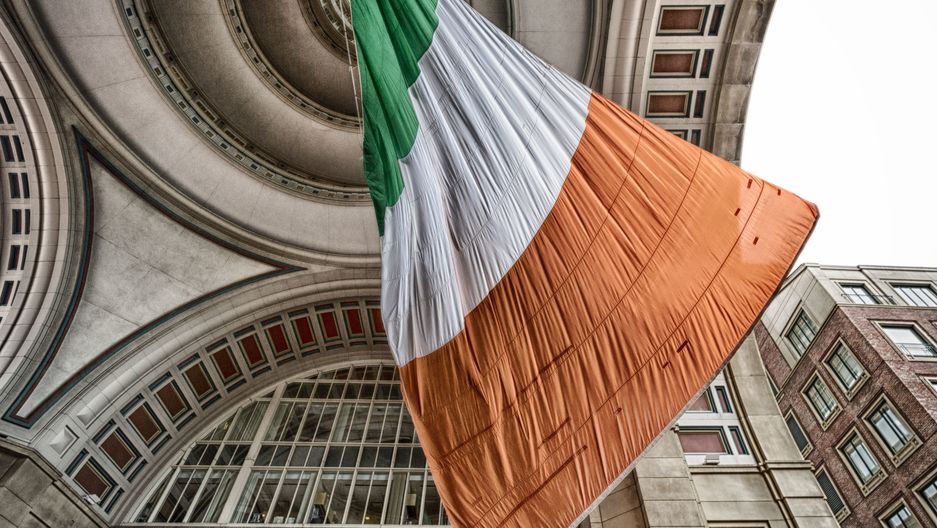 Boston is home to one of the country's largest Irish immigrant communities. A large Irish flag hangs in Rowes Wharf in March, 2014. But the deportation of an undocumented Irish activist is challenging the city to rethink racial bias in immigration enforcement.

Editor’s note: Following this story airing on The World last week, but before it was published here on PRI.org, a spokesperson for US Immigration and Customs Enforcement confirmed that John Cunningham was deported to Ireland on July 5.

John Cunningham came to Boston in 1999. Like a lot of Irish immigrants now in the US, he arrived in his 20s, on a 90-day visa for summer work. But then he settled in, worked as an electrician and ran his own company.

In a March interview with the Irish Times, Cunningham remembered how, not long after, he became undocumented and remained so ever since.

“All of a sudden you turn around, so much time has gone by, and you start to realize what is going to be in store for yourself for the future,” he said.

On June 16, nearly two decades later, US Immigration and Customs Enforcement (ICE) agents came to his home to arrest him. He was deported to Ireland on July 5. Because he arrived in the country under the visa waiver program, one commonly used by European immigrants, he had waived his right to a hearing. 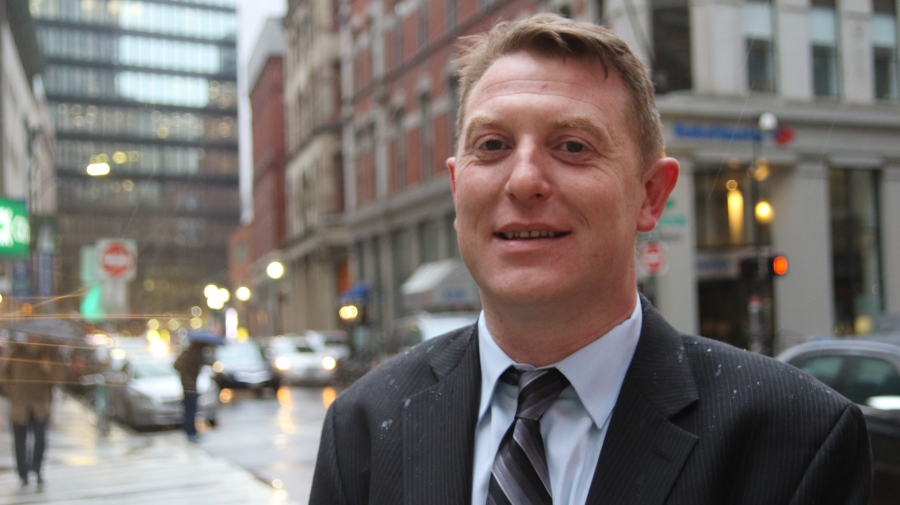 John Cunningham had been living in the US without papers since 1999. Ice agents arrested him at his home and he remained in detention until his deportation on July 5.

Ronnie Millar, who runs Boston's Irish International Immigrant Center, thinks Cunningham's decision to share his experiences and speak out for the rights of unauthorized immigrants in the United States made him a target for deportation.

ICE would only confirm that his arrest was due to his visa overstay.

But with Cunningham becoming the first high-profile Irish immigrant deported under President Donald Trump, the chilling effect is there.

"There were shock waves sent through the community, a disbelief that this was actually happening," said Millar, a close friend of Cunningham's.

It is a chill felt by people like Jerry, who lives in Boston. He asked to be identified by only his first name because he remains unauthorized to live in the US and fears deportation. When Jerry first arrived in the US on a three-month visa waiver in the summer of 2011, he hadn’t made up his mind about returning to Ireland. “The lifestyle, the work, everything was just better here at the time. So things just kind of happened,” he said. “I had a return ticket booked. I just never got on the plane."

The Migration Policy Institute estimates there are 16,000 undocumented Irish living in the US. The Irish Embassy in Washington puts that number closer to 50,000. Most live in Boston, New York or Chicago.

Like Jerry, many are hiding in plain sight, navigating a difficult world of privilege and panic as white, undocumented immigrants.

“I don’t think anyone is outright targeting people who look like me,” Jerry said, “But there’s still a fear. You could be walking in the street and bump into the wrong person, you can get pulled over while driving, walk into the wrong building or show the wrong ID. Any mishap can make this day my last.”

“Most people think undocumented and they think people who come across the southern border. They’re not thinking about the Irish guy who lives right next to them," Cunningham said in an interview with this reporter a year before his arrest. “They don’t see that part of it, but we have to live with that every day.”

Yet while the plight of being undocumented isn’t easy for immigrants of any race or ethnicity, Jerry, Millar and Cunningham all acknowledged that, as white men, they can fly under the radar of those who associate unauthorized immigrants with Mexico and Central America.

Cunningham recalled local police and immigration officials not questioning his statuses during stops. He felt that he was given a pass because of his Irish accent. He wondered if the officers would have treated him differently if he were black or brown.

Randy Capps of the Migration Policy Institute said, as a whole, white and other non-Latino immigrants are targeted for arrest and detention at disproportionately lower rates. "It’s the Latino immigrants from Mexico and Central America that are overrepresented in terms of arrests and deportations," said Capps. "The numbers of Europeans, white people, are very, very small. The pattern tends to be that most of the focus is on Mexicans and Central Americans."

Accusations of unequal treatment and racial profiling among immigrant communities have also sparked criticism in Boston about local media attention to Cunningham’s arrest. Carol Rose, executive director of the American Civil Liberties Union of Massachusetts, said that for every one story of a white immigrant who faces deportation, there are many other stories of non-white immigrant experiences not told.

Specifically, Rose pointed to Boston's Francisco Rodríguez, a Salvadoran immigrant who, after two denied asylum requests, had been granted a stay of removal every year since 2011. That changed this year under President Donald Trump, who greatly broadened which immigrants the government considers a priority for deportation.

“Traditionally, communities of color have been targeted first and that’s gotten a lot less media attention,” she said. “We need to ask ourselves why is that? We need to recognize the racial implications of this because that’s a part of this country’s history.”

Critics also point to racial bias in how Cunningham’s story was told. Julio Varela, co-host for Futuro Media's In the Thick podcast and a Boston native, has often challenged what he calls an “Irish immigrant privilege” in local media. In a column on the Latino Rebels blog he also highlights how Irish and other white immigrants like Cunningham are more often portrayed as model community members undeserving of deportation, whereas black and brown immigrants like Rodríguez are painted as menaces to US society.

It's why the Irish International Immigrant Center offers its legal and social services to many of Boston's undocumented immigrants. Christina Freeman, a lawyer at the center, said their know-your-rights workshops often include talk about racial bias and law enforcement. The participants, she said, "know there is a racial bias, they’ve experienced it.

“You look around the room and see who’s in there and there’s not one white face in the crowd," Freeman said. "It’s because the teenagers being stopped the most often are teenagers of color.”

While white undocumented immigrants may benefit from blending in, the impact on their livelihoods is no different. Funerals and weddings back home can go missed for fear of not being granted legal re-entry into the US. Millar recalls his center aiding an Irish woman so embarrassed to reveal her immigration status to her American-born family that when a parent died back in Ireland, she instead stayed in a hotel in the US to give her family the illusion she went home, rather than admit that she’s undocumented.

During an earlier interview in 2016, Cunningham described the morale of Irish immigrants in Boston as “downtrodden.” Stalemates in Congress on immigration reform make it difficult to rally advocates, he said. Following Trump’s electoral victory, Millar said there was an increased fear that Boston’s previously welcoming stance toward Irish immigrants would soon change. Those fears were compounded following Cunningham’s arrest, Millar said.

"We are not in a good place as a society," Millar said. "As a nation, we’ve really lost our way, who we are and our values — being a country that’s made up of immigrants.”'​