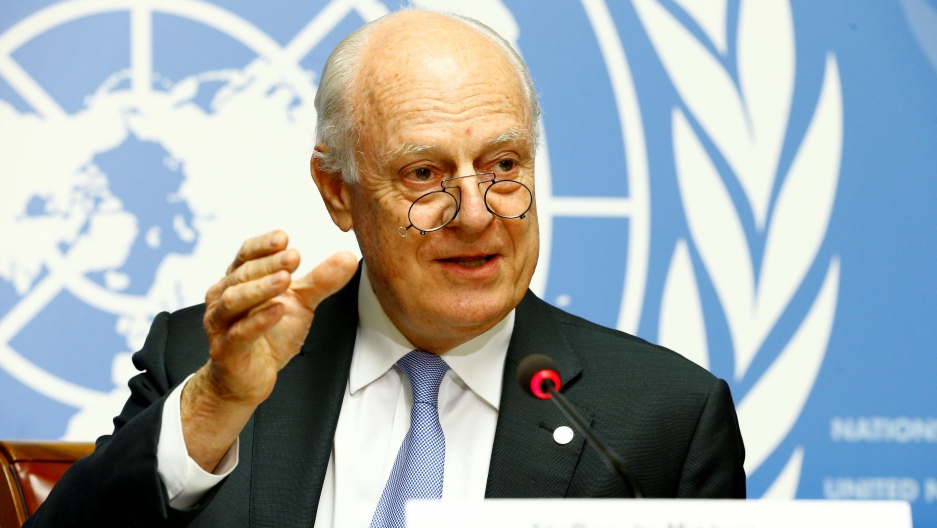 UN Special Envoy for Syria Staffan de Mistura attends a news conference during the Intra Syria talks at the United Nations Offices in Geneva, on May 19, 2017.

Pierre Albouy/Reuters/TPX Images of the Day

The UN's Syria envoy said Monday that the stars may just be beginning to align for peace after six years of savage conflict as the latest round of talks began in Geneva.

Staffan de Mistura ruled out any breakthrough at this week's negotiations to end a war that has claimed more than 320,000 lives and displaced more than half of Syria's population.

But he pointed to a new ceasefire brokered with US and Russian help, covering three provinces in southern Syria, as one source of hope.

He said other hopeful signs were the creation of "de-escalation zones" elsewhere and the recapture of Mosul by Iraqi forces from ISIS, whose geographic spread had become a prime ingredient in Syria's combustible mix.

"There is a higher potential than we have seen in the past for progress," the UN envoy told a news conference after the first day of the talks, which he is chairing, alternating between meeting Syrian government delegates and representatives of three opposition groups.

Disappointment has come all too often as various peace initiatives came to naught since a revolt first erupted against President Bashar al-Assad in March 2011, the Swedish-Italian diplomat conceded.

"But what I can tell you is that we are seeing several stars coinciding in a certain direction, both on the ground, regionally and internationally."

Beyond the human and physical devastation wrought in Syria, the financial cost of the conflict was laid bare in a new World Bank report on Monday.

Cumulative losses to gross domestic product since Syria's conflict erupted "have been estimated at $226 billion, about four times the Syrian GDP in 2010," the report said.

De Mistura and delegates in Geneva were at pains to play down expectations for the seventh round of negotiations, which are set to end Friday with further rounds already scheduled for August and September.

Yehya al-Aridi, a spokesman for the opposition High Negotiations Committee, told AFP he had "modest expectations" as this round of talks opened.

The opposition insists on Assad's departure from power, but that is a red line for his delegation led in Geneva by Syria's UN ambassador.

De Mistura, however, anticipated "incremental development" this week and said the "homework" was being done for the launch of a more ambitious peace process, "maybe much sooner than we are thinking."

On the ground, Syrian government forces launched an attack on rebels in one of the ceasefire provinces on Monday, but state media said the assault was against ISIS and de Mistura said such incidents amounted only to "teething trouble" for the truce.

The ceasefire was brokered by the United States, Russia and Jordan, and announced after talks between Donald Trump and Vladimir Putin at the G-20 summit in Hamburg.

De Mistura said the endorsement of the two "superpowers" lent more hope to this initiative after previous failures, and he also denied that a separate dialogue under way in the Kazakh capital Astana could undermine the UN process.

The Astana track is being coordinated by Assad allies Russia and Iran, and rebel backer Turkey. They agreed in May to set up four de-escalation zones in Syria, although they have so far failed to agree on the details necessary to implement the plan.

By attending the Geneva talks, Aridi said, the opposition hoped to preserve the UN-supervised track which began in 2014.

"The goal is to maintain some momentum for a political solution in light of Russia's attempts to divert attention to Astana, which it wants to design and shape as it wishes," he told AFP.

Washington, once a key opposition backer and peace process partner, stepped back from involvement in the diplomatic process after Trump became president in January.

But its involvement in the south Syria ceasefire raises the prospect it may be re-engaging in a limited fashion.

Secretary of State Rex Tillerson said US and Russian officials had discussed "other areas in Syria that we can continue to work together on."